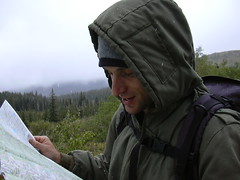 The first in a series of interviews with writers, editors and publishers exploring the future of travel writing.

I crossed paths with David Miller on Independence Day in sunny Boulder, Colorado. He pulled up in a van with a beat-up orange rodeo kayak in the back and greeted me with a fist-bump, smiling wide through his trimmed dark beard.

We found a coffee shop on Pearl Street, ordered ice teas and spent two hours talking about surf-camping in Baja, backcountry hikes in the Rockies, the qualities of literary travel writing and David’s new job as Editor of MatadorTravel.com.

David brought along a map of the mountain range beyond Boulder, which he spread out on the terrace of the coffee-shop.

“I always try to get a feel for a new place by following the water,” he said, tracing a finger up Boulder canyon and into the high peaks.

“This snow-field, up at the top, is the southern-most glacier in North America. Make that your destination. It’s where the water’s born.”

On the connection between carpentry and writing:

“There’s something about hand-work as a means of concentration that makes it very curative for me. Like most writers, I have the tendency to over-analyze; working with my hands allows space to reflect and focus.

Sometimes, when I arrive on a job-site in winter after a snow storm, the first thing I’ve got to do is just shovel snow and clear everything away before I can start work. I try to approach the work of writing in the same way, clearing my mind before setting down words.”

On corporate culture and Ã¢â‚¬Ëœandroid behavior’:

“My attitude towards ties and suits is born out of a total lack of trust of anything that’s not based on a personal, eye-to-eye relationship. Human relations based on title, or appearance, or what’s printed on a little plastic insurance card have always bothered me.

Human relations based on title, or appearance, or what’s printed on a little plastic insurance card have always bothered me.

People are good at little mechanical tasks like flipping remote controls to start their cars, but that strikes me as sort of android behavior. Especially in contrast to people like these Brazilian fishermen, who carve beautiful canoes, the same way their great-grandfathers did, who work in the bays with a style that’s just fucking timeless and beautiful.

Whereas the life of a guy doing stock trades based on bits of numerical data seems tragic-comic to me.”

“I’ve learned to look at computers as just another tool. Matador can serve on so many levels. There’s a lot on the site to help travelers find places that fit their comfort level and link up with like-minded people.

The article section has great potential to showcase events and places that might not get as much attention in the mainstream media. An article we just published about the G8 summit in Germany is one example.

Hopefully Matador inspires people to go out and take some risks, meet the locals and travel with a heightened sense of awareness. The site serves as a nexus, a virtual map that goes beyond the traditional idea of magazines and guidebooks to create a sort of hyper-map – a super detailed way of accessing information.

I think we’re at the very tail-end of traditional forms of media and the new forms present a different way of seeing things.”

“As an editor I look for stories with a literary quality – narratives that explore a universal theme with which the reader can identify.

What makes a good submission? Just tell me the story. Be willing to dig deep and take risks. Try to find the connections, tell me how the things you experienced fit in the local landscape and community.

I’m always on the lookout for people willing to take chances, writers who might be unsure of themselves, but are up front about that uncertainty.

The real story isn’t this crazy Elvis shrine somewhere, or that someone is wandering around the world with a backpack – what’s the sub-context? What’s the story of the traveler’s past and the community past? Literary travel writing needs to be rooted in a deeper context.

To be honest, I can almost always tell from the first sentence of a query what sort of article is coming. Even the first few words give me a good idea of the honesty, self-confidence and professionalism of the writer.

There’s your standard, journalistic style – setting down facts and playing it safe – and that’s fine; good solid travel information is a big part of what we look for at Matador.

But I’m always on the lookout for people willing to take chances, writers who might be unsure of themselves, but are up front about that uncertainty. What needs to come through is real honesty about their emotions and perceptions.”

On writers to emulate:

“Read Raymond Carver. He’s one of best at capturing a particular emotion and saying the most in the fewest words. 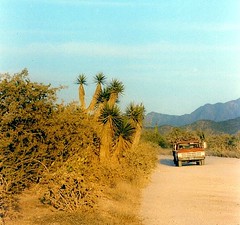 Jim Harrison is a master of perspective. He’ll focus on the minute – bring it to the middle distance – and then go all the way out to the universal. He covers the whole spectrum of perspective, which helps deepen and expand the narrative.

A lot of beginning writers stick with one middle focus throughout the story. You’ve got to stretch back into the past and extend out to the future. It’s always more edifying to read something that goes in multiple directions.

For quality description an author who comes to mind is Kent Haruf, who wrote a book called Plainsong.

Annie Proulx is a Wyoming writer who is great at using vignettes to bolster the narrative drive, writing simple crisp anecdotes that give the reader an appreciation for the character’s position and foster that all-important sense of empathy.

Gay Talese is a really important influence on my own writing, especially as a magazine writer. He’s the absolute master of the portrait. I should also mention Wendell Berry as a writer who, like Jim Harrison, excels in all forms of writing: fiction, nonfiction, and poetry.”

“My wife, Laura. She just woke up. I can’t give her a hard time about sleeping late – she’s seven months pregnant.

When we first met I was living as a Pitayero on the beach in Los Cerritos, Baja, Mexico, down there just surfing, fishing, hanging out with local kids.

I met this woman from Buenos Aires – Laura – who would eventually become my wife. Anyway, I invited her down to my little bachelor camp and we started traveling together.

Thinking back on it, the root of our marriage was the desire to make a life out of just what we had – which was very little…traveling together, finding our way.

In the end, it’s not about a surf-break or a beach or whatever – it’s about people and context, exploring a culture and experiencing a place.”

Tim Patterson travels with a sleeping bag and pup tent strapped to the back of his folding bicycle. His articles and travel guides have appeared in Get Lost Magazine, Tales Of Asia, Matador Travel and Common Language Project. Check out his personal site Rucksack Wanderer.
What did you think of this article?
Meh
Good
Awesome
Bookmark
Posted In
Travel