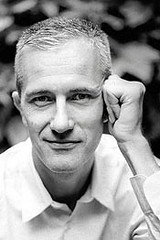 Geoff Dyer didn’t get on a plane until he was 22, a fact he attributes to growing up with parents who didn’t travel.

Yet today many of his books are devoured by jet-setters and backpackers alike.

When he saw his jazz novel, But Beautiful, in the bestsellers section of a bookstore, he asked the manager if it was true: “No, of course not,’ he said. But we didn’t know where else to put it.”

He was more than happy to answer some questions for a fellow ex-expat on writing inspirations (which range from World War I to DH Lawrence), expatriatism, and the values of traveling while under the influence.

BNT: What led you to living extendedly in Paris and Rome specifically? What drew you to these cities?

GD: I went to Paris for a very specific and a very general reason.

Specifically, because I wanted to write a version of Tender is the Night which would be set in Paris. Generally, because it was everything that London was not: small, cafés that stayed open after eleven o’clock etc.

Rome was much simpler: I went on a book tour in Italy and ended up having a romance with the woman who was my interpreter. Essentially, I went to Rome to be with her.

Would you say this leads to your propensity for expatriatism? Do you consider yourself an expat (or ex-expat)?

I am a great creature of habit so being able to establish a routine is very important to me: not just with regard to work but general well-being.

I wish I WAS an ex-pat still but I’m living in London again. I’ve always liked the ex-pat scene. It’s always been a crucial component of Paris life.

You’ve lived in two cities that all but shut down during the summer; was that mere chance, or (as someone who was once labeled the “poet laureate of the slacker generation”) is there something compelling about the summer holiday?

No, it was a mistake. Exactly like Luke in Paris Trance I turned up in Paris to rent this flat not realizing how completely the city would shut down.

It was incredibly depressing and I was extremely lonely and unhappy. Rome was a bit different: for two years running I went there quite early in the year and just stayed on while it emptied out.

I enjoy London in the summer and over Christmas because the rest of the time it is so overcrowded.

Much of Yoga… is devoted to the pursuit of a peak experience or a zone. What would you say your “peak experiences” were in Paris, Rome, and London?

In Paris I always liked walking home after dinners or parties or whatever but the thing about Paris-or at least my Paris-is that it promised so much and that promise was hardly ever fulfilled; except in the fiction that grew out of my time there.

Rome: I had lots of wonderful evenings in the San Calisto or at parties with friends or just wandering round in the amazing light.

London: living in Brixton in the 80s was a sustained peak. That’s when I became myself, I think.

And then, in the late 90s, I’m really pleased that I eventually got into the whole raving/trance scene. It would have been terrible to have missed out on that.

You often mention blurring the line between fiction and nonfiction in your writing. How much of Paris Trance was taken in part from your experiences while living there?

The geography of Paris Trance is exactly the geography that I knew. Luke lives in the places I lived.

As mentioned earlier, the novel was a fulfillment of the immense promise of the city. I sort of had a Serbian girlfriend (as in the book) but she didn’t live in the city and only visited for about two weeks.

And I never had a group of friends in the city in the way that Luke does (possibly because I didn’t have a job either).

Yoga is very closely derived from real life. Little of it is made up but bits of it have been enhanced for literary effect.

For example, I wasn’t living alone as I suggest in the book). It’s about an inch from life-but all the art is in that inch.

One of my favorite parts about your work is the inclusion of details in the cities you visit-the San Calisto in Rome, the Mosque in Paris-that lend a texture to the stories they’re featured in.

Would you say that these are more important to you than the major landmarks of a city?

Oh yes, it’s all about these little details.

But in a city like Rome the major landmarks are also part of the daily texture of life. You know, you’re always passing the Coliseum, etc.

It’s one of the things that makes life there so great.

Where do you see yourself living next?

Hmm, don’t know. I wouldn’t actually want to live there-good god, no!-but half of the book I’m writing at the moment is set in Varanasi, a completely amazing city.

I also went to Hanoi recently and would love to spend longer there. I’d like to think that at some point I’ll live in California. But time is passing and it’s not happening, partly because I have a very nice life here in London.

If you take three books with you in your carry-on, make them Paris Trance, Out of Sheer Rage, and Yoga for People Who Can’t Be Bothered to Do It, three books to inspire a delayed return.

Olivia Giovetti has lived in and explored the better part of Europe on a bohemian budget. Freelance travel writing seemed like the next obvious step and her publishers include EuroCheapo, Paper Magazine, and Classic FM. A former New Yorker, she now lives in Los Angeles.
Tagged
Travel
What did you think of this story?
Meh
Good
Awesome