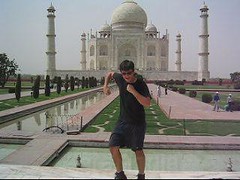 Many of you know Matt Harding from his ludicrous trips around the world, dancing his ‘prosector dun struck gold’ dance.

He’s appeared in major media all across the US, and featured as one of the top internet stars.

I figured Matt was pretty darn sick of talking/doing his dance, so when I contacted him for an interview, I promised I wouldn’t ask about the shtick that made him famous.

The result is a thought-provoking interview from a guy who’s been around the world three times over. Enjoy!

BNT: What would you say is the main difference between people in “rich” countries over developing countries?

I think the boundaries are different. In Hanoi, people spend a lot of their time out on the sidewalk amidst all the noises of the city. They set up chairs and they sit around eating and talking while their kids play on the street. In La Paz or Nairobi it’s very much the same.

People can’t afford to insulate themselves with walls and fences, so they function without a lot of personal space. I think it helps to create stronger communities and provides a web of security, because everyone can see what everyone else is up to. But of course, there are also downsides.

Coming from a relatively cloistered culture, it’s refreshing to see the vitality of a city where everyone is out and things are buzzing.

As a traveler, what’s the worst experience you’ve had in a developing country?

I think the only times I’ve been afraid for my life were when I’d done something very stupid. I can’t think of ever having been thrust into a situation like that where it was completely beyond my control.

And the few times I have been afraid for my life certainly weren’t my worst experiences. I actually remember them as being some of the best; like hiking alongside fresh leopard tracks on a volcano rim in Kenya, or winding up alone in a Mexican whore house at 4am with a strange man lurking outside my door. Terrifying at the time of course, but fondly remembered.

The worst experience would have more to do with hassles; like getting stuck in Bangkok for 8 days while waiting for the Indian consulate to process my visa application. Or maybe the 16 hour bus ride across the Serengeti where I had to pay the lady next to me $5 so I could stick my head out of the window and escape the body odor.

What was the most rewarding experience?

That would have to be shooting the dancing clip with the kids in Rwanda. I can’t say I formed a deep emotional bond with the kids or anything – I was only in the village for a matter of minutes – but that clip and the experience of making it has been rewarding in a lot of ways.

The way the kids just instantly got what I was doing and joined in without hesitation – it goes back to that thing about boundaries. And I think the clip captures some trace of the sublime joy they were emanating.

It’s really the heart of the video, and it’d led the way for me into this new project, which is getting people to come out and dance with me in every place I go.

What’s the worst attitudes a tourist can have while traveling through developing countries?

I think the real cardinal sin is expecting a place to bend to your wants and needs. The impulse to turn every spot on earth into a variation of what you have at home. It’s like in camping stores, how they sell ice cream makers and freeze-dried beef stroganoff. You’re in the woods, folks! Eat some rice and beans and go to bed!

I’m not saying we should all sleep on thatch floor mats and wear sarongs, but there needs to be a degree of respectful immersion.

Of course, this assertion makes a hypocrite out of me in many ways. I’m the guy who always orders the cheese and tomato sandwich when the menu looks too dodgy. I’ll also pay extra for comfort on trains and buses, because I can afford to and I’ll sleep better and it makes everything go more smoothly. Like I said, it’s a matter of degrees.

What are the most desirable qualities to have as a tourist in developing countries?

Don’t try to blend in, ’cause you’re never going to blend in. Be yourself, but also try to be inquisitive and engaged by what’s around you. Learn as much as you can and bring that back with you.

But then once you’re home, don’t go on and on about it forever, cause you’ll drive everyone around you crazy. You’re allowed one day of rambling about your trip for every week you spent traveling. After that, you have to shut up about it.

For more Matt Harding, visit Where The Hell Is Matt?

Ian MacKenzie is editor of Brave New Traveler, and co-founder of the blogging community TravelBlogger. Aside from writing, he spends his time exploring the fundamental nature of existence and wishing he did more backpacking.
Tagged
Interviews
What did you think of this story?
Meh
Good
Awesome

Travel is not a white boys’ club (and never has been)

An interview with Mary Sojourner on her novel 29

Is this the next generation of travel search engines?

Tips from the pros: Best apps for your Instagram travel photos

The man who cycled the world

The seriously huge assumption that affects the voice of travel