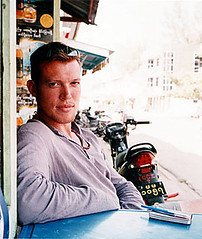 Two years ago I was stuck at a desk job with little responsibility and plenty of time to day-dream about the open road.

When my boss wasn’t looking over my shoulder, I searched for travel stories online. I still remember the first time I found travel writer Rolf Pott’s website and weblog.

It felt like the world was suddenly more open and accessible. Here was someone who wrote for me!

Rolfpotts.com is a treasure trove of entertaining and perceptive travel stories. Rolf travels slowly around the world, jotting down notes, shifting context and writing about the exhilarating joy of new experience.

Rolf hit the big-time in 2003 when his book Vagabonding was published by Random House. Vagabonding is a practical and inspirational guide to long-term travel that has spurred thousands of people to broaden their horizons, make room for travel in their lives, and set off to experience the world.

Rolf frequently publishes feature articles in major print magazines like Outside and National Geographic Traveler and popular travel sites such as Yahoo News and Worldhum.com, where he recently chronicled the death of the mile-high club.

In the following interview, Rolf shares his thoughts on travel writing for the Internet, the intoxicating “hum of possibility” that travel generates and why “speeding off toward the horizon with a sack full of Benzedrine is not always the best way to approach a journey.”

TIM: Where in the world are you now? Do you have any exciting projects on the horizon?

ROLF: I am in Paris at the moment, where I teach a creative writing workshop each July at the American Academy. I rent an apartment at the edge of the 5th Arrondissement, not far from the Jardin de Plantes and the Paris Mosque.

This is the third consecutive year I’ve done this. One twist this summer is that I am hosting my parents here for two weeks. It will be their first time in Europe.

After Paris, I’ll head back to the States, visiting friends and working on stories in New York, California, Oregon, Louisiana, and Kansas. Then late this fall I will head to Brazil and Argentina in the hopes of studying samba and tango.

TIM: USA Today once called you “Jack Kerouac for the Internet Age.” How does your approach to travel writing match with the lifestyle Kerouac glorified fifty years ago in ‘On the Road’ and ‘Dharma Bums’? And what does it mean to be a writer for the Internet Age?

ROLF: I think the comparison to Kerouac was more metaphorical than practical or literal. Kerouac introduced a generation of Americans to the joys of open-ended travel, and I’m trying to do the same.

Past that, it’s difficult to make applied comparisons, because travel – and society in general – has changed a lot in 50 years. Biographically and philosophically I don’t always follow in Kerouac’s footsteps, but I share his belief that travel anywhere carries this amazing, potentially life-changing hum of possibility: that there is so much to be gained by just mustering up the courage and hitting the road.

Hence I don’t really know what it was like to be a pre-Internet Age writer. Granted, I also write a lot these days for traditional newsstand and bookstore media, but the Internet is still my core outlet.

This allows for immediacy of reportage – some of the stories I’ve written for Salon and Slate went live just hours after I lived them. Plus, through my website, each story becomes part of a greater narrative of my accumulated wanderings.

Twenty years ago, an interesting magazine article about someone’s journey might have been read, enjoyed and quickly forgotten; now, someone who reads my stories online in Slate or Outside or World Hum can link to my website and read 70-80 more stories from other parts of the planet.

This inadvertently adds to the Kerouac mystique: instead of seeing me as a journalist writing a one-off story from some part of the world, my readers can easily discern that I’ve made an entire lifestyle out of travel.

TIM: The USA Today blurb tying you to Kerouac always struck me as misleading, since you come off as a clean-cut, hard-working, intelligent guy whose message is that extended travel isn’t such a radical lifestyle choice after all, whereas Kerouac played up the shenanigans, and his drug-fueled image did nothing to raise the profile of vagabonds in mainstream culture.

ROLF: You’re right, but it can be kind of tricky to criticize Kerouac, since over the years he has come to symbolize something that is different from whom he was as a person.

In a way, Jack Kerouac is a lot like Che Guevara: a handsome, passionate, contradictory man who is wildly romanticized for reasons that have more to do with image than reality. Like Che, Kerouac was a man who found his first success at the exact right time in history, and then wound up skewed by that success, which was something he could never quite replicate again.

And just like Che is adored more for the vague, reactive notion of “revolution” than a verifiable track record for improving the lives of poor people, Kerouac is lionized out of a hazy association with spontaneity and personal freedom – when in fact he was a rather melancholy and self-absorbed soul, even in the pages of his own books.

I have nothing against spontaneity, but I think one has to take one’s long-term self-interests into account, and speeding off toward the horizon with a sack full of Benzedrine is not always the best way to approach a journey.

So while being compared to an icon like Kerouac is certainly flattering at an image level, my approach to travel is a lot quieter and more deliberate than his was.

I have nothing against spontaneity, but I think one has to take one’s long-term self-interests into account, and speeding off toward the horizon with a sack full of Benzedrine is not always the best way to approach a journey.

The counter-cultural act of creating time for travel in an overworked society is a joy not because it’s a radical or symbolic, but because it’s a sane and enriching lifestyle choice.

ROLF: The “hum of possibility” is the feeling that anything can happen at any moment — a heady openness to the new and unexpected. It’s hard to experience this feeling at home, since home life is made more efficient and manageable by certain self-insulating patterns and routines.

That’s why at home we fall into these little rituals of low-stakes possibility, like going to bars to meet people, or dabbling in new fads or hobbies. That’s all great; I’m not knocking the patterns of home-life. But on the road the potential for new experience is so much more powerful and real.

You can challenge yourself: reeducate yourself, reconsider yourself, reinvent yourself if you want to. Embracing this sense of challenge and newness — which may be nothing more complicated than wandering off the obvious tourist trail — can send your worldview and even your outlook on life into new directions.

It’s a somewhat intimidating, yet invariably intoxicating feeling that follows you as you travel.

TIM: I hear you’re working on a new book-length travel narrative. Can you tell me about this project? When will we see it on shelves?

ROLF: I probably won’t say much about the book project right now, because the book seems to veer into a new thematic direction every time I try and explain it. I will say that it’s a travel narrative, set in Latin America over the course of several seasons. Given the lead-time on books, it will probably be 2-3 years before you see it on shelves.

This is the second interview in a series exploring travel writing in the 21st century. Read the previous interview with MatadorTravel.com Editor David Miller.