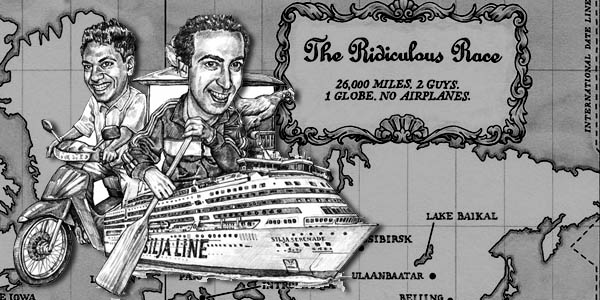 WITH ANOTHER INSTALLMENT of the addictive Emmy award-winning The Amazing Race barreling towards its conclusion, TV watchers will soon be left with an extra hour to kill on Sunday nights.

To fill the void left by Phil Keoghan, Jerry Bruckheimer, and those yellow and red route markers, we recommend Steve Hely and Vali Chandrasekaran’s The Ridiculous Race.

Published earlier this year, The Ridiculous Race is a dual-narrative of two best friends racing each other around the globe.

The prize? A bottle of Scotch. The catch? No airplanes.

Final destination aside, Steve and Vali prove that it’s really all about the journey.

And their background in television writing (Steve is currently on American Dad’s writing staff and Vali works for My Name is Earl) makes their Race a truly ridiculous-and ridiculously amazing-book to read.

BNT recently chatted with Hollywood’s intrepid travelers, who discussed everything from airplanes versus jetpacks to Madonna to Pico Iyer.

BNT: Did either/both of you travel a lot growing up or harbor any wanderlust? Who were your travel influences for this trip? 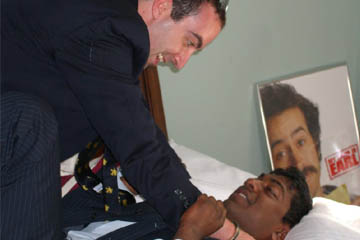 Steve chokes Vali for handcuffing him at the start of the race.

SH: Yes, I’ve had horrible, incurable wanderlust all my life. I remember once talking my dad into driving me to Albany once just so I could have a look at it.

We had a long, silent ride home.

VC: While I was growing up, my family made frequent trips to India to visit relatives. My father would stay for as long as his job’s vacation policy would allow (usually two or three weeks) and my mother, sister, and I would stay for the entirety of our summer vacation from school.

Since this didn’t overlap with the summer vacations of my cousins (their break was shorter and came in spring if I remember correctly), I spent much of my time in India reading books. I can’t remember a single one of them.

To answer the second part of your question, my main travel influence for this trip is the same as the main overall influence in my life: Madonna.

What led to the development of The Ridiculous Race? Was it always a book idea or did it originally come out of the age old question “What do we do during hiatus?”

SH: The idea definitely came first – the idea of racing around the world. The “book” aspect was more just a way of getting someone to pay us to do it.

Had we known how hard it was to write a book, we probably just would’ve forgotten about it and gone to San Diego.

VC: I came up with the idea by myself with no help from anyone. And no booze was involved. Whatever anyone else (Steve) says is textbook poppycock.

You made the trips in the summer of 2007, just a few months before the WGA strike. Did the knowledge that a strike may happen impact your trip at all–or did the strike itself impact your writing of The Ridiculous Race?

VC: To be honest, none of the TV writers I knew really thought the strike was going to happen until the week before it actually did happen. We are notoriously bad at predicting the future, especially our own.

Without the strike, we never would’ve finished the manuscript on time-we might’ve been the only writers in LA who were happy about it.

So the strike didn’t impact the trip, but it did impact the writing. I, for one, would have never been able to finish writing the book in time for our publication date if I had still been working full time at My Name is Earl in November and December of 2007.

The on-time publication of the Ridiculous Race was one benefit of the strike that the press repeatedly refused to report on.

SH: Without the strike, we never would’ve finished the manuscript on time-we were way, way behind when the studios and the WGA colluded to give us an unscheduled vacation.

We might’ve been the only writers in LA who were happy about it. Not that writing in any way took away from my nonstop effort to bring labor justice to Hollywood.

There’s an obvious connection to CBS’s Amazing Race while diverting heavily from the Bruckheimer concept (no planes, a bottle of Scotch for the winner, no Road Blocks). Do you think you could beat TAR teams given the chance? 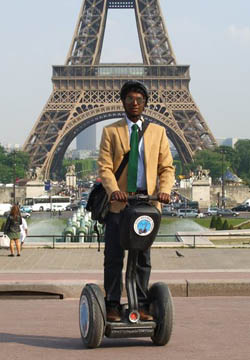 Vali riding a Segway in Paris

VC: I’ve actually never seen an entire episode of the Amazing Race. What I’ve seen seems like less of a travel show and more of a which-camera-crew-aided-team-can-make-it-to-the-airport first.

Since I’m habitually late to the airport, I seriously doubt I could beat any of the TAR teams.

I’d argue that the first situation makes for much better comedy, but admittedly it’s pretty hard to make a TV show without cameras. Former Amazing Race champion BJ Averell was in college with me; I would not wish to compete against him in a contest of antics.

I think if Vali and I were on The Amazing Race, we’d spend most our time playing pranks on our cameraman.

While traveling under the clock, did you feel you got to truly “experience” the places you visited? Where would you like to go back and explore some more?

SH: Oh, I think 3 days is more than enough time to fully experience China. I had the place figured out after about six hours.

I am only joking of course! Part of the fun of this book was trying to consume as much “experience” as possible, a challenge which very nearly caused me to die of exhaustion.

I’m sure it was annoying to many of the people whose paths I crossed, too:

Steve: AHH, I NEED TO EXPERIENCE EVERYTHING ABOUT LIFE ON A CARGO SHIP! Help me have EXPERIENCE!
Sailor: Uh, I just work here man. I’m changing the ballast water.
Steve: CHANGING THE BALLAST WATER! EXPERIENCE!!!
Sailor: Maybe you should go take a nap.

VC: I definitely did not get to truly experience the places I visited. Early on in the race, when I was in Mexico I realized that I was wasting this wonderful opportunity to see the world because I was going too fast.

So I slowed things down a little bit. But even then, I never spent as much time as I wanted in a single place. Hopefully, I’ll have a chance to go back to every place I visited during the Ridiculous Race.

However if I had to pick a favorite region, it would be the Middle East. It’s the place I’ve read so much about, but actually knew so little about.

My night accidentally spent in Palestine, with a bunch of basketball players, watching army flares and floating in the Dead Sea will always be one of the most memorable nights of my life.

What did you take into consideration when picking the points on your race? How did you navigate the no-planes policy? 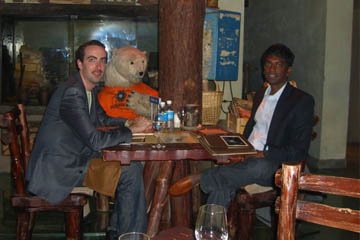 VC: I ignored the no planes policy and picked the points on the globe I thought would be the most interesting to visit. It was actually pretty difficult to choose because I wanted to go everywhere.

The one place I really wish I had gone, but didn’t, was the region where Brazil, Uruguay, and Argentina meet. It’s sort of an un-ruled no-man’s-land.

I really wanted to buy some arms there that I could use to frame Steve and get him arrested by the F.B.I. Instead I drank beers in Rio.

SH: Well, this was very easy for me – my route is the best way to get around the world fastest if you’re not using airplanes.

And, because I’m very clever, and I figured Vali was too lazy to have figured this out, I casually suggested I go west, so I could

But the key to any round the world race is the Trans-Siberian Railroad – you can cover a quarter of the earth’s surface while sitting in your PJs eating Snickers and reading Tom Clancy.

Since finishing, a friend of mine pointed out that I could’ve gone to South America and boarded a boat that rounded Antarctica, thus crossing every degree of longitude and thus making me the winner. But that might not have been as fun.

Speaking of no-planes, Vali, what made you decide to break down and go via air? Steve, did you have any clue he was flying while on your trip?

VC: I had been thinking about flying for a while, the notion of spending three weeks on freighters didn’t really appeal to me. I tried to circumvent this no-planes rule by purchasing a jet pack in Mexico, but it didn’t meet my personal safety standards.

I assumed Vali would do something stupid. And he’d been talking about this jetpack inventor for years, so I figured that might factor in.

Also, practically speaking, I wanted Steve and me to be having adventures in different places. I didn’t think anyone wanted to read two accounts of how mind-breakingly boring crossing the Pacific on a freighter is.

SH: I assumed Vali would do something stupid. And he’d been talking about this jetpack inventor for years, so I figured that might factor in.

I did think he’d at least make an honest effort-I was terrified this book would contain two long descriptions of the Queen Mary, since that was the fastest way to cross the Atlantic.

Finally, will there be any upcoming races or travelogues? Should Pico Iyer be quaking in his boots?

VC: I am currently in training to break the land speed record (currently 763 mph) without using any machines. I’m almost ready for the attempt. All I have left to do is select a pair of running sneakers.

SH: I hereby challenge Pico Iyer and HIS friend, the Dalai Lama, to a race across Africa by bicycle!

Buy the Ridiculous Race on Amazon here. Also, check out a review by Nerd’s Eye View.

What do you think of Steve and Vali’s Ridiculous Race? Share your thoughts in the comments!

The best island in the Caribbean for every type of traveler
7 disputed territories that only tenacious travelers can visit
These destinations are opening to US tourists this summer
Loop from Boston to California and back on the ultimate US train trip
Can we trust negative COVID-19 tests as a green light for travel? We asked a travel doctor.

Croatia is the first EU country to welcome back US travelers