Two young filmmakers headed to document the new oil boom in North Dakota. What they found suprised them most of all.

One of the biggest oil booms in U.S. history is now underway around the town of Stanley, North Dakota.

North Dakota doesn’t normally get a lot of attention, but last summer two young Matador members traveled to Stanley to make a film about the oil boom. The footage they shot is truly striking, and “Crude Independence” will no doubt be an important record of this moment in American history.

Tim: How did you initially decide to shoot a documentary in North Dakota?

Noah: I first heard about the oil boom in North Dakota when I read an article about it in the New York Times published in January. It was not a very lengthy piece but it caught my attention right away. I had a feeling there was a film to be made.

I knew from the moment I got out of the car in North Dakota that this was a story worth telling.

I was still on winter break from school so a few days later I flew from New York to Minneapolis, rented a car off of Craigslist because I wasn’t yet 21, and drove to the small town of Stanley, North Dakota.

After shooting some location footage and talking to farmers, oil workers, and local officials, I came back to the east coast and spent the spring raising money to make the film.

I knew from the moment I got out of the car in North Dakota that this was a story worth telling.

Sarah: How often do you have those conversations that start with the phrase, “Wouldn’t it be cool if…?”

It wasn’t until Noah called me on his way to North Dakota that I realized he was driven enough-and impulsive enough-to actually make this happen.

Later that semester I was awarded a research grant through my college to spend the month with him, helping him with the film while also working on a piece of creative nonfiction about our project.

Tim: Did you have an idea of the movie you wanted to make before you went, or did the story evolve in unexpected ways? 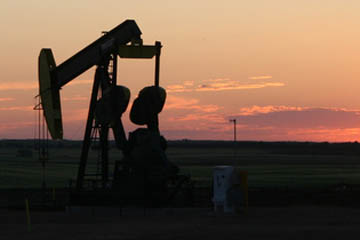 Noah: I knew I wanted to take a human angle on the oil boom– to explore how lives are changing because of the discovery of a resource so far below the surface.

I wanted to talk to farmers who own the rights to the minerals under their property, those that do not own their rights, the landmen researching mineral deeds in the county courthouse, and the oil workers themselves who crowd the bars, motels, and jails.

The unexpected evolution of the story was driven by the characters we met along the way. As much typecasting as we did ahead of time, we tried to be as open and flexible as possible to what unfolded while we were there.

We ended up finding some ecstatic moments– from a boisterous group interview with out-of-state oil workers behind a local bar to a late afternoon spent with local farmer and oil well owner John Warberg, who showed us the original wooden shack that his grandparents homesteaded in when they arrived with the first wave of Norwegian emigrants to North Dakota over one hundred years ago.

They never had a water well, but now the decayed windows look out upon Warberg’s oil well.

There were also memorable situations we created for ourselves, like the night Sara and I crawled through a wheat field to sneak footage of a drilling rig. There’s perhaps six seconds of that footage in the film but it was certainly worth the thrill.

Sara: Noah had articulated a pretty clear vision for the film, but it was based on the idea that our story would be driven, more than anything, by the experiences of people living and working in Stanley.

In that way, the project demanded a certain amount of flexibility that we found as exciting as it was maddening.

And while our initial vision never changed all that drastically, at some point our footage definitely started to take on a sense of authenticity and humanity-I’m picturing our friend Leroy, a landman, singing karaoke at the local bar and winking at our camera.

Tim: Sara, you grew up in Manhattan, and Noah, you’re a student at one of the more liberal colleges on the East Coast. Was there some culture shock to deal with in North Dakota? Were you able to really connect with locals and roughneck oil workers? How?

Noah: We anticipated a culture shock, but I can’t say it ever happened.

You have a beer, play some pool and sing some karaoke with the oil workers and all of a sudden where you’re from doesn’t matter–it’s about whether or not you’re willing to have a good time.

It doesn’t take much to connect on a basic human level with honest people.

I have to say that the transparent and down-to-earth values of many of the people we met in North Dakota were very appealing to me.

It doesn’t take much to connect on a basic human level with honest people.

Sara: The disorientation I felt had more to do with the landscape than the culture, I think. The sky was bigger than I’d ever believed possible, and the winds were more severe. It was a geology stripped bare, and it couldn’t have felt further from the anonymity of a big city.

There was also a different culture of food, and at some point— I think after a few days of eating only chicken burgers and cheese burgers at the restaurant in town– I started to dream of fresh vegetables.

Tim: I’m not surprised you guys got along with the locals while shooting the film – that sense of unguarded authenticity really comes through in the trailer.

Another feeling I get from the trailer is an eerie sort of foreboding, often associated with the tools of oil production. No doubt your audience has very mixed feelings about energy companies like Halliburton, in light of global warming, oil wars and government corruption.

Did you have any assumptions about oil production when you arrived in North Dakota, and how did they evolve while making the movie? 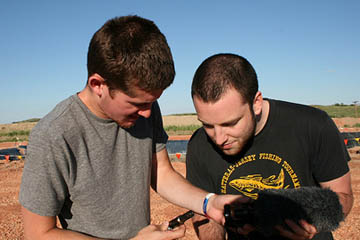 Sara: That’s a complicated question. I definitely have a knee-jerk reaction to big name oil companies like Halliburton, and I can’t help but connect the sight of a drilling rig to the invisible structures of corporate greed and power so embedded in the oil industry.

But our goal was to focus on the social impact of the oil boom, the human experience on a local level, rather than taking any sort of overt political stance.

We learned quickly that holding onto a certain amount of neutrality would allow us to hear a much wider range of perspectives— I can’t tell you how many times we were asked if we were making an environmentalist movie, as if the e-word were some kind of slur.

So it was important to us that we approach people working for the oil companies as people effected by the boom rather than as characters through whom we could push an agenda.

Still, my general sense of corruption and gluttony in the oil industry went pretty unchallenged. We didn’t have the most positive relationships with oil company officials, who consistently ignored us or turned down our pleas for access to a drilling rig.

Although I left with an understanding of the growth and opportunities that come with a boom, I also have a more intimate sense of the possibility for economic collapse — the inevitable bust.

Noah: I don’t have anything to add to Sara’s last response. I think she nailed it.

Tim: What did you learn from the people of Stanley, North Dakota that you hope to communicate to the people who watch your film?

Noah: I have no generalizations to make about the people of Stanley, North Dakota, because everyone is handling this situation in their own specific way, and I think our film communicates that point.

The central issue of the film is the question of how a natural resource so far below can so dramatically affect life on the surface.

The central issue of the film–what drove us to make it and what I hope people respond to–is the question of how a natural resource so far below can so dramatically affect life on the surface.

I can say generally that the people of Stanley were incredibly welcoming to us, and most were more than willing to give us interviews and show us around. I think the film reflects that welcoming spirit. We were able to include a very diverse collection of voices from the community.

Sara: Noah’s right. It made our job a bit more difficult, but it was impossible to generalize or simplify the range of voices we heard in Stanley.

Instead of trying to wrap things up into any one lesson or argument, we wanted to communicate the impossibility of doing exactly that. I think, in the end, it’s that embrace of multiplicity that will make viewers feel like they can relate to the community of people they see in the film.

On the other hand, we were asked by a few local residents in Stanley to convey one message in particular— that everyone should buy more canola oil— because canola is one of the main crops grown in western North Dakota.

Tim: Buy more canola oil, right on. Thanks for chatting guys, all of us at Matador can’t wait for the film.

Do you have a question for the filmmakers? Please join the conversation by leaving a comment below, or check out Sara and Noah’s Matador profiles.