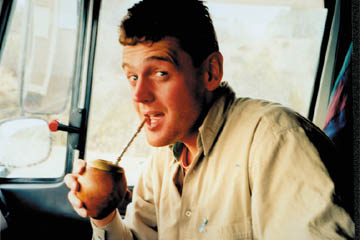 Many people dream of traveling around the world. Only a few people get the chance — and even fewer circle the globe without the aid of an airplane.

Tony Robinson-Smith is one of those few.

Tony was living a fairly cushy life running an English school in Japan. But after five years, he was ready to shed his regimented lifestyle and tackle the world firsthand. What began as a study of a world map turned into a long, wiggly journey across hot sands, open roads, and stormy seas.

Five years and nine months later, his journey came full circle, and Tony published a travel memoir, Back in 6 Years.

In this interview Tony reveals a little about his motivation, and what it was like to crawl around the world.

BNT: Tony, you wrote that your inspiration to travel around the world without flying came from Ted Simon, who wrote:

“It is no trick to go round the world these days. You can pay a lot of money and fly round it non-stop in less than forty-eight hours, but to know it, to smell it and feel it between your toes, you have to crawl.”

Is there anything that you would add to that quote?

Tony: I would add little to this quote because I think Simon clearly understood that surface travel is a combination of hardship and reward, and that the rewards are worth the hardship.

As the Shakespeare quote at the beginning of my book indicates, the greatest reward is indeed often gained by embracing the unpleasant.

Thus, I crawled, so to speak, and learnt many things, but the greatest lesson was that it was worth crawling.

I got the impression that the idea for your trip came out of restlessness and grew very quickly – even though you were living in Japan, you were tired of the routine. What else was behind your decision to take a sabbatical from the everyday?

The fact that I was living in Japan before deciding to take to the road is important. Japan is an orderly, duty-conscious and decorum-conscious nation where space is in short supply — roads are narrow, houses in towns and cities are built close together, and paddy fields cover much of the cultivatable countryside.

Resident foreigners must learn to make do with less physical space and, to succeed in work, they must conform to a fairly strict code of conduct.

After five years, I was ready to break out of this limiting environment, as I was feeling a bit like a caged bird!

I wished for the opposite of Japan: wide open spaces, wilderness, fewer sanctions on my conduct, unstilted conversations. I also felt that if I wanted to truly learn about the world, it would be best for me to go out and experience it firsthand.

Media reports cannot be trusted and are too readily digested as truth. I was confident that I would gain a more real, less skewed appreciation through direct experience.

I also nursed the belief that adventures happen to the adventurous and now was the time when a sustained period of global wandering would likely be rewarding and yield the extra-ordinary.

During the first part of your journey you seemed fairly lonely and uncomfortable and not really enjoying yourself. When you started out, was it less about the thrill of travel and more about completing a task that you had set for yourself?

Africa was certainly a rude awakening after Japan. In a short space of time, I switched from the regulated to the chaotic. In Japan, I had a cozy life – a steady job, good salary, apartment, friends, girlfriend.

The change brought discomfort, uncertainty and a measure of loneliness. The appeal of my self-imposed mission, to travel without flying, did give me something to focus my mind on while I adjusted to my new lifestyle, became less defensive and began to enjoy the ride.

Did you ever think of throwing in the towel and booking a flight home?

Sure. I got frustrated, bored, sick, tired and lonely many times and wished to return home, but these feelings never lasted.

I was aware from the start that circling the planet by land and sea would take time and test my patience and resolve.

I was aware from the start that circling the planet by land and sea would take time and test my patience and resolve, but I was convinced the rewards would make the long journey worthwhile.

As you know, I traveled in as many different ways as possible – bus, train, truck, bike, pirogue, yacht – and this helped keep the journey ‘fresh’ and stimulating.

I think I would have found it tougher had I traveled only one way. Stops for work also helped; returns to a routine quickened the appetite to be on the road once again.

Before Canada, I was traveling mostly in the less-developed world where, I guess, there were more delays, making the pace seem slower.

But the most convoluted and slowest stretch of my travels was through Asia.

When Nadya [Tony’s now-wife whom he first met in Canada] came to see you in China, you said that she countered your “tendency to rush.” Which leg of the journey – if any – do you feel that you rushed?

I think there were times in Africa when I felt hounded or in peril, so I tended to keep moving. If I had been more at ease, I could have lingered longer and explored further on this fascinating continent.

Once in Anglophone Africa, visas weren’t necessary and frontiers were easier to cross. Maybe if Nadya had been around, the black line on my world map crossing Africa would have turned out wigglier!

Looking back – no regrets, of course! – what would you would do differently? Would you have learned a bit of Portuguese before entering Brazil, or listened to the voice in your head telling you not to sail long distances with an inexperienced crew?

Indeed, no regrets! I’ve written a lot about the sticky situations I got myself into and out of, and I think these serve to color the book, making it entertaining — instructive even.

A solo journey around the world by land and sea inevitably throws the intrepid traveler into trouble; in fact, he or she seeks it.

A solo journey around the world by land and sea inevitably throws the intrepid traveler into trouble; in fact, he or she seeks it.

Having said that, it is wise to cross the Sahara Desert with a full jerry can of water rather than an empty one, and it is also wise to inspect the sailing vessel you will cross an ocean on carefully and assess its seaworthiness.

Also, as far as you are capable, be sure of the competency of its skipper and the mental stability of its crew.

What surprised you the most over those six years of traveling?

The willingness of strangers to help me out. In my hour of need, there was almost always someone about to offer a helping hand.

French expeditioners in jeeps bailing me out of the African jungle; the Hovington family in Canada feeding a hungry cyclist; an Australian [Leo Learoyd] who made our Indonesian canoeing adventure happen.

I was also surprised to discover that fortune indeed favors the bold. I refer to myself at the end of my travelogue as a “common or garden variety English teacher.”

I’m not especially practical and have no survival skills, but I was determined and my determination to succeed led to good fortune.

Now that you’re back and settled, do you feel that it was a once-in-a-lifetime thing? Is it out of your system, or do you think you’ll be itching to set off again? This time entirely on a bicycle, perhaps?

My journey was a rite of passage that answered the need I had at the end of my 20s to break away from a routine existence and discover the world for myself.

While on the road, I had the feeling that I would not travel this way, this far or for this long ever again.

My subsequent trips have been shorter and focused on single countries — I’m just back from the Kingdom of Bhutan in the Himalayas where I spent two years lecturing and traveling; the subject of my next book.

Having said this, I note that Ted Simon, my source of inspiration, retraced his wheel-tracks round the world some 40 years after his first world circuit.

It would be interesting to see how places have changed and write a book about that.

Be sure to check out Tony’s book Back in 6 Years: A Journey Around the World