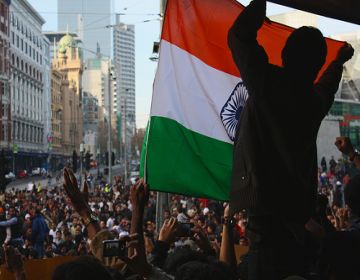 Although I’m under no delusions that racism isn’t alive and well in this world, I have to say I’m a bit surprised about the attacks happening lately to students of color in traditionally white countries.

Between Buster’s piece on Matador Abroad asking Should People of Color Go To Russia?, and a recent article in the Times of India about attacks on Indian students in Australia, the fear reverberating from the ruling class of the past is palpable.

It hardly escapes attention that those being targeted, according to both of these pieces, are students, some of which are working on their Ph.D. To me, it seems like the fact that people of color are being educated to a higher degree than most of the rest of the population is triggering some deep insecurities of being ‘less than,’ which are being acted out with vigilantism.

For both Blacks in Russia and Indians in Australia, the need to tell roommates their whereabouts at all times, be on full alert while taking public transportation, and not be out past a certain time at night certainly makes one feel like a second class citizen.

What Is Being Done About It?

The Times of India tried to come up with a more subdued reason for the prevalence of attacks:

Another possible reason for the attacks against the Indian students could be the fact that they work part-time along with pursuing their studies and travel late in the night, which makes them vulnerable to assaults.

Hmmm. Well, the Victorian Police have started “sensitisation programmes” in order to educate the community about the attacks happening in Melbourne. Also, Buster notes in his article, “most people in Russia are not violent racists.”

While in one way, these are attempts to stem the assaults, I feel like a much stronger message needs to be sent to those initiating the attacks. Unfortunately, that may not come from within these countries, so pressure from the outside – by the media, or your blog posts – might be the way to help keep these students safe.

What can we do to help stop attacks on students of color? Share your thoughts below.

The first week of August was International Blog Against Racism Week, and you can find links to blogs leading the revolution here. And if you think that racism isn’t outwardly tolerated in the US anymore, check out the piece, A “Whites-Only” Pool in 2009?

What did you think of this article?
Meh
Good
Awesome
Bookmark
Posted In
Travel
Destinations
Australia Russia