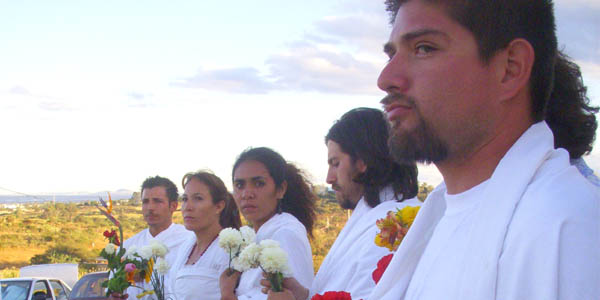 Waiting the arrival of the guru / Photo Suzanne Shanklin

“Do you have any white clothes?” asked a voice, rudely awakening me from a few hours of disturbed and uncomfortable sleep. “Come on, hurry up, we need to buy fruit and flowers before we meet the guru.”

I was in Michoacan, Mexico, staying with a few local friends we had met on our travels. Friends who, it became apparent, were masters of non-information.

For the past couple of days we had been living in a small cloud of confusion, and it intensified as clothes were selected for us from a large stack of brilliant white garments.

We were not going to be allowed anything to eat or drink (apart from water) until we had finished the meditation session.

“Why do we have to wear white?” I asked. “It’s so all our energy vibrations are in harmony,” I was informed. “If you wear colors you will create a force that is stronger than everyone else.”

Bleary eyed in the early morning light we piled into the car. The two guys ran to buy various meditative objects, while the women huddled inside and grumbled at one another.

“I want a cigarette” said the chainsmoker (me). “This is all very well and good” snapped my disgruntled friend, “this quest for spiritual enlightenment, but I know what I’d prefer right now. A big plate of huevos a la Mexicana and a strong coffee.”

It soon became apparent that our requests had been denied, as the guys informed us we were not allowed to eat or drink anything (apart from water) until we had finished the meditation session. 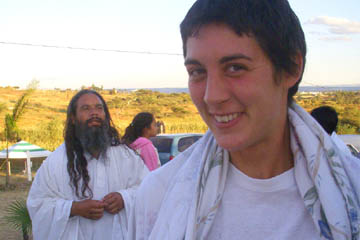 The author with the guru behind / Photo Suzanne Shanklin

Like little white sheep we were driven to a small altar and terrace by the side of a busy road. As we waited the other white clad spiritualists arrived, most of them hungover from the night before.

Soon we were a very noticeable circle of twenty five spiritual seekers holding hands, under the gaze of our guru. He was a man with long, grizzled grey hair, dressed in flowing white robes and wielding a staff.

He beamed at us with an expression of serenity.

Our first task: we were all made to discuss the properties of the staff. Our guru attributed our different answers to the fact that we are all individual, and all needed different meditations, (though my nicotine deprived brain neglected to point out we were all dressed like clones).

We proceeded to shout and chant various mantras from around the world, whilst the palms of our hands grew sweaty and our stomachs growled.

After a while, the guru broke from the group and stood in front of each of us in turn, chanting “moonie moonie, joomie joomie” and waving his hands in circles like a tranquilized trance raver. We were meant to copy him.

By the time the guru stood before me I was reveling in the absurdity of the situation. I believe he mistook my repressed laughter for a bubbling over of youthful spirituality.

I believe he mistook my repressed laughter for a bubbling over of youthful spirituality.

My friend refused to copy the guru’s actions. He tried multiple times: “Moonie moonie? Joomy joomy?” Her face blazed thunder- a moment that captured perfectly the clash between new-age spirituality and rationality.

The meditation finished. “Now” said the guru, “you are going to climb the mountain,” as he indicated one of the summits that encircled us. “But first, I will give you all your own individual mantras, ones that suit you perfectly. You must repeat them inside your minds as you climb the mountain.”

Due to my inability to pronounce the Spanish â€˜doble-ere‘ sound (roll my rrrrr’s), I wasn’t able to accurately mouth my mantra â€˜Om-Rrrim’, but my choking sound seemed to suffice.

“Leave behind food and water” the guru said. “Take only your sheets, and women, take the things you need for your children.” (I forgot mention, we’d all bought bed-sheets with us at the guru’s request. White, of course). 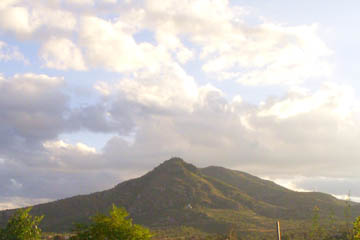 The climb began, everyone helping one another and tripping over their sheets. It was rather beautiful, I imagine somewhat akin to the biblical exodus to The Promised Land.

For a moment, I savoured the silence of the view and the feeling of the fresh, nicotine-free air. I enjoyed the feeling of finally reaching the top of the mountain, that sense of accomplishment, and the vista at the top.

We were Northern Mexico, during the season when the monarch butterflies migrate south for winter, and they spiraled round us in meandering flights of fluttering wings.

I looked at the sides of the mountain, spotted with graffiti rocks and pink wild-flowers, the city of Aguascalientes laid out before us like a circuit board. I settled on a rock next to my friend and attempted sleep, with the sun burning red lines into my face.

After a while, the seekers shuffled awkwardly, then, finally, someone asked “Where is the guru?”

It was relayed to us that the guru had, for some reason (a confusion exaggerated by my shaky grasp of Spanish), gone to a city over an hours drive away, and we had to descend the mountain and wait for him in someone’s house for the meditation classes.

No food, of course, which my friend and I grumbled about on our descent. “We need something” we pleaded to our friend Carlos, “even some juice”.

“It’s better if you don’t” he replied. “You don’t need food. It isn’t good to meditate when you are full.”

Caught In The Act

When we arrived at the house, I spied a plume of smoke- the woman of the house, standing on her terrace, gazing quizzically at the white reclining figures on the lawn. 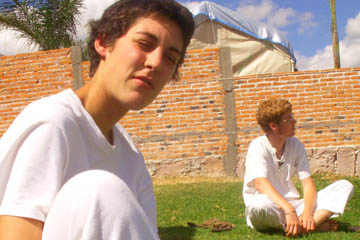 I went to ask her for a cigarette, and joined some of the others who were hiding inside like naughty schoolchildren. We all breathed a sigh of relief, and I confided to one of Carlos’s friends that they wouldn’t let us eat.

“Do you want some food?” he asked. “We have some bananas in the car,” I sighed sadly. “No, real food. GORDITAS. Our treat.”

The guru returned at a rather unfortunate moment. We were sitting on the grass stuffing our faces with dripping tortillas, the oil running down our chins and staining our clothes.

He stood above us, casting a benevolent shadow over our display of greed. “When you eat, eat only to sustain yourself. Eat slowly, calmly, and with every mouthful, thank the Gods. You have five minutes to begin, then we will start the meditations.”

We rammed the remaining food down our throats, and clumsily formed a circle, ready to begin.

When you fall in love with someone, you gaze into their eyes in a way you would never do with a stranger.

The first meditation, a singing meditation. We wrapped ourselves in our sheets, leaving only our heads poking out (rather like E.T. riding the flying bicycle), and began to sing along with the tape, singing and waving our hands.

“Sal y salsa, sal y salsa, sal y sal-sal-sa-al” we sang, over and over again. Despite my very English, very close minded notion of not wanting to look ridiculous, spiritually speaking it warmed us up. Ready for more classes, more breathing exercises.

One of these was two form two circles, one of men, one of women, and, moving in different directions, stare each other in the eyes and hold the gaze. When you fall in love with someone, you gaze into their eyes in a way you would never do with a stranger.

I fell in love with several people.

People have beautiful eyes. They are the window to the soul, after all, and there was no blankness or rejection, only the occasional shyness and insecurity, brief glimpses of a bright iris through lowered lashes. 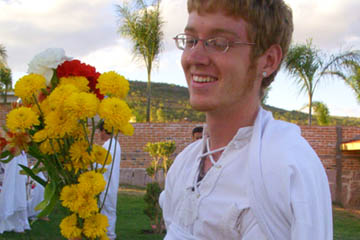 Another meditation involved lying on the grass, face-down, eyes closed, with the guru moving with roaming fingers, tickling us until we screamed and writhed like little white grubs.

Then he placed his hands firmly on each person’s back and pressed down with a force that elicited manifold cracking sounds, and afterwards, a sigh of relief.

Not many massages can compare with that sudden release of tension, which undoubtedly prepared us for the rest of the meditations.

After climbing a mountain and gazing at each other like lovers, the group felt very close. My friends and I agreed to meditate more, without the clothes, sheets and hunger. To my surprise, even my most cynical friend hugged the guru goodbye.

He thanked us, holding out a plastic cup to collect our money, if we wanted.

He instructed us to give our flowers to the lady of the house, and she looked on as twenty five large bouquets were laid on her lawn, undoubtedly wondering where, exactly she was going to find twenty five vases.

We said our goodbyes and left, driving off in a cloud of red dust, already dreaming of our next episode of unorthodox behavior.

Have you tried a similar group meditation experience? Share your stories in the comments!