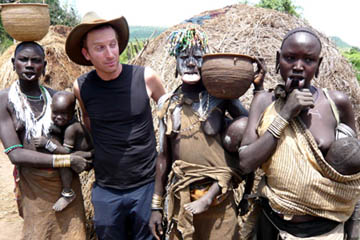 I am that guy. The one you see on TV and think: That must be the luckiest guy in the world

Can you imagine having his job?

Three and a half years ago, a car ran me down at an intersection and broke my knee. It hurt. Not in a “I’m disappointed in you” kind of way. In a “give me the effen morphine!” kind of way.

For my pain, my insurance company awarded me $20,000. I was about to turn 30, and my career was flailing, along with my relationship. So I cashed it in, put my stuff in storage, and went to backpack the world, on a tiny budget and a round the world ticket.

One year later, I had been to 28 countries, and written for a couple major newspapers. Two years later, I had been to Central America, rocked the Trans-Siberia Railway, along with a national speaking tour. To finance the continuation of my dream, I slept on couches, and ate a lot of cheap pizza.

A short while later, I pitched a TV show. The stars aligned, the fates smiled, angels broke out in hymn. Word Travels is a half hour show that follows the lives of two travel writers around the world.

You can watch it on OLN in Canada, and National Geographic Adventure in over 40 countries. Over the next 12 months, I’ll be visiting 26 countries on 6 continents, with a TV crew to capture my experiences.

I am stunned just writing this. This all happened, essentially, by accident. But I suppose someone has to get paid to travel the world. Might as well be me.

These reports will give you some insight into a life of travel, on the road, on camera. I call them Modern Gonzo, since Gonzo is about the best word to describe my world of adventure.

I hope you enjoy the trip as much as I do.