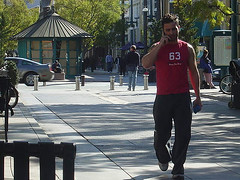 Let me make one thing clear from the start: I don’t like mobiles, or Ã¢â‚¬Ëœcell phones’ as we call them in the States.

When I first checked out the website of Mobal, an international cell phone company that sells inexpensive GSM World Phones, I was deeply skeptical.

Sure, I’ll review the site, I thought. But I don’t need one of these contraptions. I was the classic tough sell.

The Mobal website may be the online version of a late-night TV infomercial, but the service they offer is very attractive to a certain set of travelers.

If staying connected on the road is a priority and convenience is more important than cost, the Mobal GSM World Phone turns out to be a smart investment.

Staying in touch from the road is not difficult or expensive if you’re willing to adjust your habits and rely on the Internet instead of a cell phone. Or, if you’re staying in one place for a while, it’s not a huge hassle to buy a SIM card or pick up a cheap phone locally.

But what if you really need to stay in touch with home and/or have a cell phone while traveling?

What if you’re going to many different countries in a relatively short time, and don’t want to get a new cell phone (and a new number) every place you go?

It would be very, very convenient to have one reliable cell phone, with one number and one simple calling plan that you can use no matter where you are in the world.

You won’t want to chat all day, but that’s not necessarily a bad thing – more time to concentrate on traveling!

There is no fee for anything except for calls you make or receive. This means the phone is a good deal for travelers who don’t plan to use a cell phone much, but want one reliable phone on hand, just in case.

Calls from a Mobal phone aren’t cheap, but the prices aren’t ridiculous either. Incoming calls tend to cost a dollar or two per minute, and outgoing local and international calls are priced at around $2.50 per minute.

At that rate, you won’t want to chat all day, but that’s not necessarily a bad thing – more time to concentrate on traveling!

However it shakes out, using a Mobal phone is a much better and cheaper alternative to renting a phone locally.

I seriously considered buying a Mobal GSM phone for my upcoming trip to Patagonia. Ultimately, though, I decided that since I’m traveling with my laptop, I don’t really need one.

Also, since I’ll be in Chile and Argentina for over 5 months and don’t plan to visit other countries, I can buy a cheaper phone locally and call friends and family in the U.S. and Japan over the Internet with Skype (which is free).

But if I was visiting many countries, or if my business travel were a little more, um, financially significant, I would not hesitate to snap up a Mobal GSM world phone.

How do you stay in touch on the road? Leave a comment below!