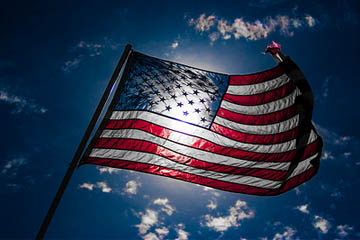 At the time of the last Presidential election, I was living and working at a backpacker’s hostel in Scotland.

One of the only other Americans there at the time helped me celebrate what she and I christened ‘Obama Day’ by baking a massive cake and frosting states red or blue accordingly as the ballots came in.

When the cake was just over half-frosted, the room, which was riddled with mostly Spanish, Canadian and Australian onlookers, gazed in awkward amusement as we burst into tears, held hands and shrieked the Star Spangled Banner at the top of our lungs.

Since then, I have never been able to think of that day – that moment, erupting with unadulterated national pride – without feeling guilty about how rare those moments are for me.

After all, I travel with a Scottish luggage tag on my backpack.

Patriotism comes in unpredictable waves, and too often, the icon of the American flag carries negative connotations – like excessive consumerism, for example. Recently some new stigmas have popped up: one might misconstrue flag-flying as condoning the war in Iraq, a judgmental religious fanaticism, or worse, a feeling of superiority over other nations.

This last one is what really kills it for me. As a traveler, it’s in my nature to feel quite the opposite.

Diminished At The Edges

Every so often, though, “Old Glory” (as the flag was nicknamed by William Driver, an early nineteenth century American sea captain) can be a poignant reminder of the principles on which our country was founded.

“A great empire, like a great cake, is most easily diminished at the edges.” – Benjamin Franklin

Post 9/11 flag-flying is a classic example of how our country’s emblem can suddenly dump all those unfortunate legacies of our cultural and international wrongdoings and be re-conquered by the compelling and inspirational ethos of our founding fathers – if only temporarily.

Sam Adams wasn’t just a future mediocre-tasting lager. He was a visionary who called for citizens to take individual responsibility for themselves, to carry out their civic duties. And Thomas Jefferson did more than seduce his slaves. He insisted that “the cement of this union is in the heart-blood of every American.”

That’s us, even when we’re haggling in Peru or paddling up the Yangtze.

In fact, Benjamin Franklin had a tasty little metaphor: “A great empire, like a great cake, is most easily diminished at the edges.” Our country’s reputation is easier to nibble at abroad, where there are fewer people to stick up for it.

That is, expat Yanks worldwide are America’s fondant and sprinkles. The jaded trail-bums, the naïve Kumbaya-ers, and especially everyone in between… we are all the edges of Obama’s cake. Unfortunately, we are the edges of the Iraq-Halliburton-Enron cake, too.

This is a call to put more responsibility on our shoulders than we bargained for when we flew, starry-eyed, across our first ocean.

I’m guilty of hiding behind the Scottish flag. And it seems many Americans play it safe with the Canadian flag too. 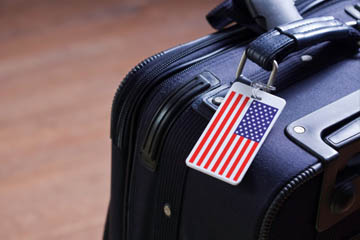 In Egypt, I was told to pretend to be Australian as we entered a Mosque. Even a friend once recommended a city to me and added, “But you’ll have to say you’re from Canada if you want people to be nice to you.”

To be honest, it’s not entirely our fault that so few of us are willing to expose Old Glory while traveling. Travelers and expats bear the heaviest burden – much heavier than that of everyone at home.

We are the faces and voices of our nation’s past mistakes. We are the messenger, the tangible entity at which resentments can be aimed, the minimum-wage single mom who happens to be on the other line of a 1-800 complaint number. We are the ones who repeatedly and involuntarily must defend, apologize, and explain.

This, the constant risk of verbal judgment or attack, is why many become too shy, tired, over it, or embarrassed to bring a tangible form of Old Glory along for the ride.

At our hostel, everyone had their national pride on display somewhere. Aussie boxers, a South African flag hung above a bed, a Kiwi beach towel. At one point the few Americans congregated and realized we didn’t have much in the way of insignia.

We admitted we don’t usually bring Old Glory with us. And, looking around, we realized what we might be missing out on.

The way I see it, travelers are citizens of the world – we shouldn’t bear the burdens of our government everywhere we go, especially if we travel to escape or to forget a stigma we did not choose for ourselves.

At the same time, if we are open-minded, considerate, adventurous, and passionate, isn’t it more important to carry the flag with us? After all, how else are we to change people’s opinions about our country; if we let the intolerant and the corrupt carry the flag alone?

Sam, Tom, and Benji would be ashamed of those of us who play pretend when we don’t have to. Representing the U.S. in a positive light should be a welcomed civic duty.

Every traveler has the right to decide whether they want to blend in or say it loud and proud. Both choices come with a sacrifice. Bringing Old Glory with you when you travel can highly influence how you’re treated.

Yet whether you choose to put it on your keychain, your hat, or nowhere at all, you can’t change where you come from. You can only change whether or not you have a positive attitude about it – quietly or otherwise.

If we’re brave enough pack our national identity with us, we can start to change people’s discriminatory attitudes by setting a positive example.

Rescuing our most meaningful and remarkable icon… Benji Franklin would be proud.

Tagged
Activism Culture United States
What did you think of this story?
Meh
Good
Awesome