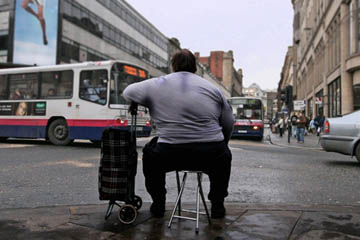 United Airlines just became the latest airline to make obese people pay for a second seat in coach, or upgrade to first class.

They are determining who has to pay more by assessing if the passenger is “unable to use an extended seat belt, put their armrests down, and if they infringe on another guest’s seat.”

UA will refuse to transport or will remove at any point, any passenger … in the following categories where refusal to board or removal from the aircraft may be necessary for the safety or comfort of themselves and other passengers: … persons who are unable to sit in the seat with the seat belt fastened and the armrest down.

They add that the person “will not be removed upon the purchase of an extra seat,” and that if a seat is not available on that flight, they’ll have to take the next flight “without penalty” that has adjacent seats available.

A United spokesman said the rule was enacted due to the piles of complaint letters received from (apparently smaller) people sitting next to larger passengers that overflowed their seat.

But are the airlines really making the move to appease the leaner guests, or is it more about making money?

Airlines have continued to make the seats smaller and smaller over the years so that they could fit more people in, and most large people just need a few extra inches, not an entire other seat.

And as William Saletan points out in his article, those who are too tall for coach can often (relatively) cheaply upgrade to business class, where there is up to five extra inches of leg room.

Above and beyond United or Continental’s financially-influenced decision making, I’m even more interested in the comments made in reaction to this blog about the the new rule.

One person, who goes by “Fat People Suck,” had quite a bit of commentary, including this choice piece:

Sucks for the fat people … but then, maybe they should lose some weight. Its annoying as hell when you are on a 10-11 hour plane ride, cramped as hell, and then it turns out you have 1/2 as much space because some fat ass cant fit into their own seat.

FPS later responds to a comment made by a man named Andy who mentioned being 6’4 and having a large shoulder width, mocking him by saying “Hey guys! I’m Andy, I’m totally fat (though I wont admit it!) and describe myself as a ‘bulge’. You probably ate my meal didn’t you?”

Many of the other comments were not friendly towards overweight or obese people, and I couldn’t help but think, what if this person were Muslim? Or African? Or physically handicapped in some way? Would people dare to be so offensive?

I guess at one point in history, people did.

Don’t get me wrong – I understand that we want to be comfortable on our flights, especially the long ones, and that we’ve often paid good money to do so. But it’s as if obesity is the final frontier for complete and utter prejudice and discrimination: total fatism, or being fatist (a person with a prejudiced belief that one persons weight is superior to others).

Or as Anonymous says:

I like taking these comments and replacing ‘fat’ references with ‘gay’ references, really highlights the hate speech. For example…”… I’m tired of being in a country where not only is being gay acceptable, it’s looked down upon to taunt gay people and encourage them to go straight! I used to be gay, and I went straight because kids would make fun of me. Now the queers have no reason to be gay.

Thank you, United, for taking a step in the right direction, even if it was financially motivated and not really morally backed at all.” Good thing this is all directed at fat people, since that makes it okay…

What do you think about the airlines rules for obese people? Share your thoughts below.