LAST WEEK we published a wonderful narrative that talked about the history and persecution of a little-known group of people called the Doukhobors. Originally from Russia, they fled in large numbers — mostly to British Columbia — with the help of Leo Tolstoy. The article was written by a Doukhobor, born and raised in Canada, and included some photos of his family as well as historical photos of Doukhobors and the fanatical offshoot, the Sons of Freedom.

One of the photos, taken by George Diack, depicted a young boy sitting amidst burned down houses in 1962 (the Sons of Freedom used to burn structures as a form of protest against materialism). This photo caught the attention of a reader who immediately got in touch with the author, Rob Chursinoff, to explain the story behind the photo. We are sharing this story because this picture has been used many times since it was taken, and the boy in that photo — now 55 years older — has never had a chance to share how this photo came to be. We share it as a reminder that not everything you see is the full story. 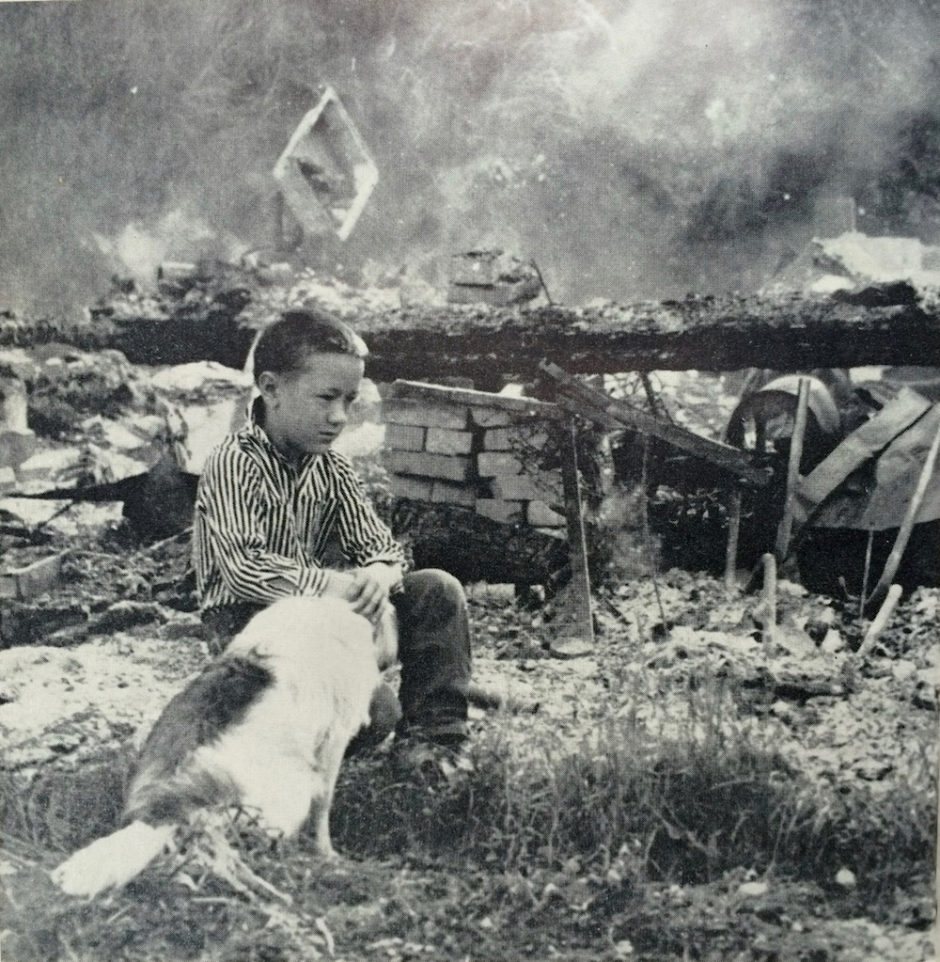 The words below are from Nick Kootnikoff, printed here with his permission:

“That boy is me. Seeing that picture of me gave me a flashback for the first time in my life (even though I have seen the photo lots of times before). Last night I basically re-lived in my mind this visual image from 55 years ago. I felt a lot of anger because I also remember how I was MADE to pose for it by Simma Holt for her biased book, Terror In The Name of God. She and the photographer George Diack walked all around the burned house to find the best angle for the “right image” that they wanted to portray.

“As my memory serves, they also picked out my clothes which could be confused with a prison uniform, their interpretation of what my future may be. This image caused me so much grief in the years following when I was growing up in and going to school in Vancouver. All the hell I went through from the other “normal” Canadian children at schools that I attended — for being a Doukhobor. Even the feared D-Squad, yes, the Doukhobor police, felt sorry for me and actually changed my name for a while at one school in Vancouver that I went to so that my culture would be hidden. Later in life I continued to be singled out and picked on at work for where I lived. I feel I was branded by Simma Holt, with her lies about our family & her BS. One of her quotes was, “I was being trained.” (For what I’d ask but I already know how she felt about us.)

“Today’s laws in this country would not let a picture of a minor like me back then to be published without consent. Innocent till proven guilty is what the law said, unless you were Doukhobor. I feel that I was being accused of doing something even back then when I was an innocent child. They can’t show a minor’s face without consent, yet no one gave permission to take and use the picture of a child that age – and worse, profit from it by telling “LIES”. I still see it being used, without my name, without my story, which is what hurts.

“Being a child I did not understand what Simma Holt was doing at the time. At this time, I wish I could delete that picture & some of these lies from the internet. It’s hard to explain so many decades after the fact but my education has suffered greatly from that picture being put in the papers. It was printed almost every week in the STAR WEEKLY paper, making me recognizable when trying to go to school and learn by a society that deemed us (and me) terrorists. Being bullied by my peers, instigated by Simma Holt’s inaccurate rants about my family. I can say now, and really am just realizing, that I was bullied because I was a recognizable Doukhobor, and I owe that to Simma Holt’s encouragement by constantly putting my face in the papers and writing about me. This photo which appears so innocent to most, has been used to degrade my culture and has affected the path of my whole life.”