Packing one small bag, a camera with two lenses, and little else, and then hitchhiking 10,000km from Oslo to Beiruit while sleeping on the couches of just-met strangers, might sound like a recipe for having your body dumped in a nondescript ditch somewhere in Eastern Europe. Or, if you have read Kerouac, a lot like a modern replay of On the Road, sans trains and playing out on the other side of the Atlantic.

It’s also precisely what Norwegian photographer Sebastian Dahl recently finished doing — basically winging it the entire way, and producing a photographic account of the changing landscapes and the people he met. It’s a reminder that the world can be a lot safer than we think. I got in touch with Sebastian to find out more about his ad-hoc odyssey.

RS: So, first off, what made you decide to embark on this journey? And why Beirut?

SD: I wanted to travel around the world but found out that in order to get to know people and places properly I would have to stay for a long amount of time. I think Lebanon is the first chapter of a book containing many countries. I will live here for a year and hopefully learn Arabic and get to understand the region’s tradition, history, and politics better.

I left Norway to bring my camera on new adventures. I believe photography is about telling stories and if I stayed home I wouldn’t learn to tell these stories in a proper way. As for the destination of Beirut, Lebanon was a random choice. I had to start somewhere, so because I like the food and I’m interested in the language and region I just went for it. As for hitchhiking and sleeping in random people’s houses (I call it “improcouching”) it’s something I’ve been doing for many years. I find it easy and have never had any problem traveling this way. It’s very exciting and interesting to only meet locals, I wouldn’t travel any other way.

It looks like you traveled with minimal gear and a pretty open itinerary. In retrospect, would you have planned anything in your packing or your route differently?

Before leaving I just made sure of a few things: that I could get to Lebanon with no visa problems, and that I had potentially interesting photography projects on the road. That’s about the only planning I did and I wouldn’t have done it any other way. I left Oslo with only a 40mm lens and bought a 28mm in France. That’s about all I missed. For the next trip I’m thinking about traveling with only a 35mm, but I’m not sure about that yet. 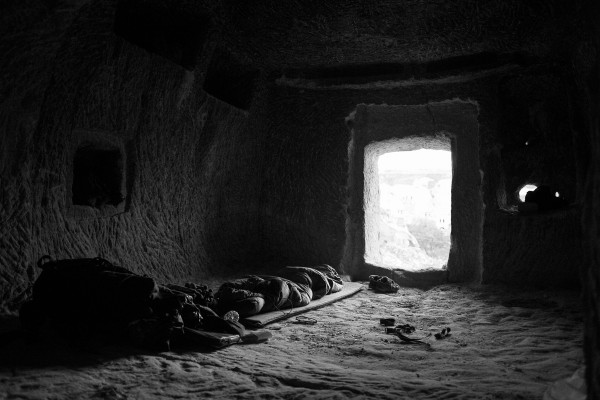 Sleeping in a cave in Cappadocia, November 2012
I’ve seen worse sunrises and landscapes to wake up to.

Deciding to hitchhike your way to Lebanon is a pretty novel way to travel in a time when so many people would simply book onto buses, trains, or other public transport. How did you find the hitchhiking experience differed from more ‘managed’ ways of traveling?

As I said before, hitchhiking is something I’ve been doing for many years — since the summer of 2006 to be precise. I don’t really know why I went on my first hitchhiking trip back then — it might have been just to piss of my parents, but I loved it. It was very easy and the people I met were all very different and interesting, and so I continued. I love traveling this way because I really get to meet locals. They are my guidebooks and some become friends for life. Every time I take an airplane now I feel bored to death. Trains are OK though.

…and did you meet any people on the way that stand out as particularly amazing, terrifying, or interesting?

I sure did. But only amazing and interesting, no terrifying people.

By way of example: My very first ride out of Oslo was with a middle-aged guy driving me to Göteborg in Sweden. He worked as a publisher at a book factory, and we talked a lot about photography and my projects and found out we have some friends in common in Norway. On the way we took a detour by his best friend’s house on the Swedish coast and had coffee and sandwiches.

In France I got a lift with an ex-drug addict who just came down from some mountains where she had done meditation. We talked a lot about her life and life in general. She was very inspiring to listen to and she told me she was very glad she met me because I had somehow inspired her too. Then in Rome I met a 66-year-old communist with a big mustache by randomly asking people in the streets to host me. His answer was a very brief, “Sure, come on. It’s this way.” Normally people act surprised and ask questions, but I ended up staying at his place 5 nights and we became good friends. 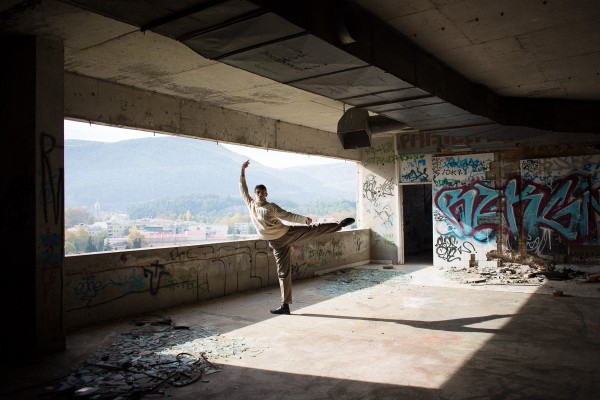 I bumped into Tomislav in a bar the other day. He needed a scanner real bad, I needed a place to sleep so we exchanged services. I scanned some documents for him and he let me stay at his place. This picture was taken the next morning when we climbed to the top of a building in ruins to see the city from above. Tomislav is a retired ballet dancer from the National Theater of Croatia and he now works in web development.

How did people you traveled or stayed with on the way react to your journey?

Most people were surprised to hear I was hitchhiking so far and for so long. After all it’s 10,000km and I’m going to be away for a year, so I understand it. A funny thing I noticed was that all people tend to say that hitchhiking and improcouching “here” is more difficult than in neighboring countries. It was as if people had quite a bad image of their fellow citizens when it came to hospitality. But I found it to be easy everywhere.

As you went, you also took a number of photos for different series, titled Portraits from the Road, Right Side Window, I Slept Here, and Passengers. Can you tell me a bit more about them and the thinking that inspired them?

I didn’t want to be a tourist on the road with a camera. I’m a photographer and I wanted this trip to be educative: I have a lot of steps to climb in order to become the good photographer I want to be. Portraits have always been difficult for me, so in Portraits from the Road I forced myself to take portraits in the time and situation that presents itself. Passengers was the best way I found to illustrate how fun it is to hitchhike. The 112 pictures/videos I ended up with show how diverse and enthusiastic the people I met on the road were.

Right side window is a simpler project. It just described how the landscape changes from Oslo to Beirut, and I did it this way because I’ve always loved a topographic approach to photography — I think it’s very powerful and in retrospect I found the series telling me more than what I initially thought. These landscapes end up showing the limits of being on the road for just being on the road’s sake. Without the people and the situations, road trips are nothing (to me).

Now that you have arrived in Lebanon, what are your future plans?

I’m working on a book and a video from the trip. Other than that, I want to learn Arabic and do freelance photography work here. No luck so far but I’m keeping the faith.

For others contemplating stepping out on their own adventures, what advice would you give to them for taking those first steps, and recording their experiences on the way?

You have to know that there’s a world of good people out there. The negative image that the media creates of the world is just bullshit. They stigmatize, sensationalize, and talk only about the negative things because that’s what sells.

Try it and you will see. But do it step by step. Hitchhike to a city close by for starters. Don’t do anything you think is extreme if you want to stay safe.

To record your experiences, think of your camera as a way to remember the things you liked as you traveled. For me it’s a lot about the people I meet and very little about churches, museums, and other tourist attractions, so I focus on taking pictures of people. Don’t think too much about what gear to buy before leaving. Just use what you have or keep it simple, because that’s probably what you will shoot best with. 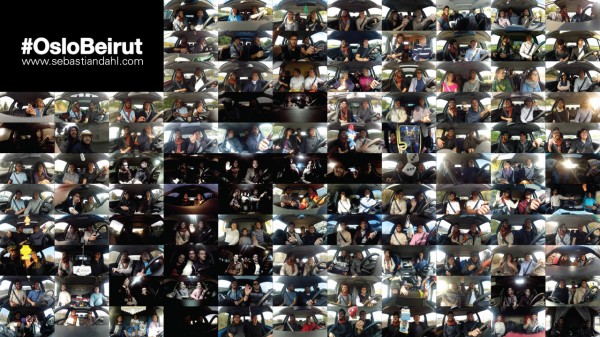 Here it is! The picture I’m going to have printed on a big canvas and hang up on my bedroom wall in Beirut (without the black text box ofc). This mosaic contains all the pictures of all the cars who drove me from Oslo to Beirut. 112 cars, trucks and scooters in total. It’s been an incredibly exciting and rewarding adventure. Thank you so much everyone who picked me up, hosted me, guided me and gave me a wonderful life lesson. From the bottom of my heart THANK YOU. Pictures from the adventure are to be seen on the #OsloBeirut tag on my blog and soon in a book and in a video.