14:06 Apr 22, 2020
Top Countries
Top CitiesView All Destinations
Trending Countries
Trending Cities
Load More
There may come a time when travel stops being fun. How will you know it’s time to go home? 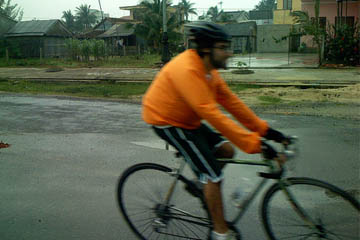 Cycling in Vietnam / Photo Shoot Into The Sun

It was eerily similar to swimming.

Water gushed through my helmet, down my hood, and into my face. My gloves and shorts were saturated, weighted sponges clutching my skin. Peeking out from worn sandals, my toes lapped up street water with each pedal stroke.

Faces plastered against the windows of passing cars to gawk at the cyclist, his bike laden with panniers, pushing through the downpour into downtown Moncton, New Brunswick.

Somewhere within this surreal montage, I lost the mental battle I’d been waging during the past three days of rain-soaked riding. The thought I’d been struggling to ignore-suppress, really-was now inescapable:

It was time to retreat. I was ready to go home.

How much do we give up for the chance to travel?

What in the world could even cause such an unthinkable thing to happen?

We stretch our paychecks, take time off work, spend every free moment planning or daydreaming and separate ourselves from our family and friends.

All this in eager anticipation of filling our days, weeks, months, or years on the road with potent experiences, discovering firsthand cultures and landscapes we could otherwise only imagine.

Considering this, then, it seems inconceivable that we would cut our travels short. It’s the last thing we’d ever want to do.

What in the world could even cause such an unthinkable thing to happen?

In reality, most travelers have faced circumstances that forced them to reevaluate, reshuffle, and inevitably retreat. Some cases are straightforward-you lose your passport, contract dengue fever, or learn of a family emergency back home. 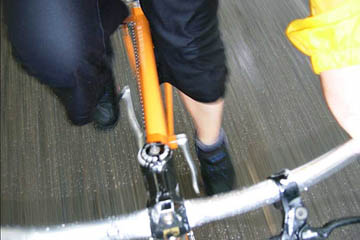 Others are less cut-and-dry. Perhaps you’re having second thoughts about spending the money required to continue. Or maybe an aspect of your trip has contrasted wildly with your expectations.

And then there’s the one no traveler wants to admit to themselves-the journey has somehow ceased being fun.

Back in New Brunswick, I’d ridden through one too many rainy day, the scenery had grown dull, and work was piling up at home. Climbing on the bike each morning had become a chore, not a privilege. The idea of finishing the last week of my tour around Atlantic Canada felt forced, insincere and burdensome.

All the factors were in place. I knew it was the right decision. But still, I winced as I boarded the bus for the six-hour ride home…six hours with my face plastered against the window.

Was quitting really the right decision? Sitting that night at a familiar desk in a familiar apartment in a familiar town, my mind wouldn’t let the question go.

What unimaginable and spectacular sights would I have seen, what people met and emotions experienced, had I pressed on? What did it say about me as a traveler-a person, even-that I didn’t finish what I set out to do?

Had I fallen from the ranks of the true globetrotters? Was I ever among them to begin with?

Different strategies helped me cope with these nagging doubts. Compiling my photographs of the trip for possible future publication.

Reveling in the extra time I now had to fully overhaul my trusty bicycle. Planning for my next spate of travel, which happened to be just a few weeks away.

But within all of this, there was one central realization that emerged: Travel is supposed to be fun.

But within all of this, there was one central realization that emerged: Travel is supposed to be fun.

It is not a proving ground for membership in some elite club, not a competition to determine who can last longest or set eyes on the most destinations.

Travel is inspirational, rewarding, and fun. When it loses these qualities, the traveler in turn loses their purpose for being on the road.

All good journeys have their rough patches, those pivotal moments that make you question your plans-and yourself. But experienced travelers know the difference between a character-building bump in the road and the signal to throw in the towel.

They know when it’s better to retreat, to travel another day.

Author Hal Amen isn’t the only Matador contributor to abandon a bike ride in New Brunswick. Matador editor Tim Patterson rode from Montreal to Acadia in the fall of 2007, but gave up in Bathurst, New Brunswick and took the train home. Here’s his quitting blog: “The Blue Side Of Lonely”