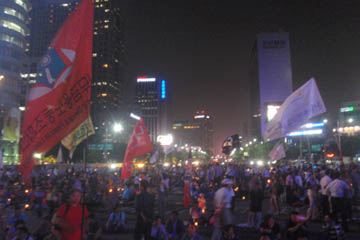 The irony of looking for a steak restaurant in the frenzied height of a protest about beef did not escape me.

The citizens of South Korea were out in force, vocalizing their discontent at their government’s decision to allow US beef to be imported into the country, after being banned for fear of importing Mad Cow disease along with it.

If cows were being infected in the fields of the United States, you can bet Americans would be dropping like the flies feasting on their corpses.

Thousands of people on the streets, riot police, water canons, blockades – you can also bet this is a more complex issue than bovines going bonkers. And I had a window seat, since the action was taking place below my hotel window at the Somerset Palace in downtown Seoul.

A rock narrowly misses my cameraman Sean’s head, slamming into the armoured police bus barricading the road to City Hall. Out on the street, he’s encouraging me to get closer to the BBC/CNN cameras, who are mobbed up front around an important protestor spokesman.

The police “chicken buses”, as the locals call them, are covered in eggs, spray paint, stickers, and the overall discontent of the masses.

A rock narrowly misses my cameraman Sean’s head, slamming into the armoured police bus barricading the road to City Hall.

I estimate there are over 50,000 people protesting tonight, after the government declared that it would in fact go ahead and lift the ban on US beef.

A long line of people form a chain to bring sandbags up front, creating a makeshift bridge to walk over the buses into the thousands of armed riot police waiting on the other side.

A water canon rises threateningly, a couple youngsters high tail it through the masses, but the sandbags keep coming. A few rocks get hurled, but besides an eerie female voice telling everyone to “Go Home” the cops seem content to wait it out.

Fortunately, tear gas is banned in South Korea. Members of the press are wearing hard hats and protective gear, except that is, members of Word Travels, who shamefully are just enjoying the thrill of being close to their first major urban riot.

I’ll admit that things like this can turn dangerous very quickly, but there was a buzz being a part of democracy in action. Plus, the protestors were mostly calm, if a little angry.

If this were China, or the U.S, rubber bullets would be flying and trust me, I would be enjoying the view from the Jacuzzi on the rooftop of the Somerset. Danger on the road is a judgement call, and we all rightly judged we were in no harms way. 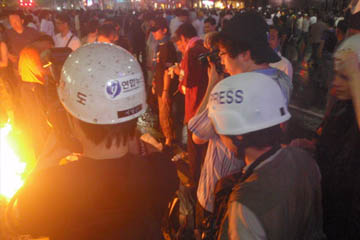 Meanwhile word and gushing water on the street indicated there was more action just a block away, and here, in a narrow alley, a robotic water canon was spraying a mass of determined protestors.

A stream of water rushes over my sandals, and there’s a peppery smell in the air, possibly because the water is laced with an irritant.

After drenching the faithful up front, the canon stops, and a large rope gets picked up and pulled in a tug of war to tip the buses over. I took hold of the hard rope to figure what the chances are, and since the buses were no doubt anchored on the other side, chances were slim.

Ripping the grates and wooden boards off the chicken buses was an easier task, and inside I could make out the shadows of riot police, no doubt shitting a beef patty in fear of the thing actually overturning.

A girl next to me tells me she is studying in North Carolina and flew home specifically to take part in the protests. “I can’t believe this is happening in my country,” she says, dismayed, as the chanting kicks into another gear and the water canon renews its projectile into the crowds.

She blames the government for not listening to the people, but since Korea is America’s third largest beef importer, I imagine it’s less about people and more about money.

It’s getting late, so we decide to head back to the hotel, which sits behind the barricade. Riot police let us through a small crack (oh, the things you can get away with being a tourist!) and we walk back to the hotel through the dark, eerily quiet streets.

We see the anxious faces of young policeman, eyes as innocent as calves to the slaughter.

We see the anxious faces of young policeman, eyes as innocent as calves to the slaughter.

South Korea’s mandatory conscription has all men serving in the army or the police force. It is highly likely that these kids have friends on the other side of the barricade, girlfriends, family.

If they were not in the police force, they might be there too. Instead, they sit on their shields, row after row, five cops deep. We walk without hindrance, even stopping to play around with some of the riot gear.

We can hear the livid chants of the protestors on the other side of the buses. It is one of the most surreal and tense scenes I have seen throughout my journeys.

And it is all about meat, and where it comes from, while just a few hundred kilometres away, North Koreans are dying in a famine.

Like the rest of us, Koreans live in interesting times.

How to plan a cheap, last-minute vacation to Martha’s Vineyard
The top hotels for extravagant floating breakfasts and how much they cost
The 25 coolest towns in America to visit in 2021
Being a passport holder from one of these countries means constant restrictions
The world’s 10 cheapest cities to explore in a day