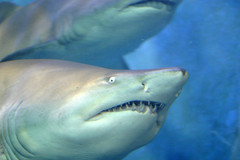 One of my favorite parts of the Best American Travel Writing anthology each year is series editor Jason Wilson’s foreword. With each new edition he finds a seemingly unrelated anecdote that somehow, unexpectedly, illustrates the point he is trying to make about the value of good travel writing.

This year is no exception: he begins with a report about a shark attack in New Jersey, an exceedingly rare event that led to the almost-instantaneous publication of helpful sidebars and advice boxes on How To Survive A Shark Attack in the local papers.

This leads Wilson to a discussion of the “If You Go” boxes that accompany most travel content: “Presumably, this information is there in case you want to duplicate the writer’s trip on your own.”

But the stories in his anthology – and, I think, the stories I’ve selected here today – come without any practical sidebars, because they can’t be replicated. And in Wilson’s words,

“That’s because, like all great travel writing, each of the stories collected here is born of a singular experience, point of view, and voice. Each of them is a rare achievement. Perhaps even rarer than a shark attack in New Jersey.”

Tom Bissell first caught my attention for some thoughtful stories about his travels in Vietnam with his father, a veteran of the war. In this World Hum dispatch he winds up in the middle of a present-day conflict, after walking across the Friendship Bridge from Uzbekistan and into Afghanistan in 2002, in the early days of the US-led invasion.

Bissell’s brutal honesty about his unpreparedness for war-zone reporting, in contrast to the hard-drinking, hard-bitten correspondents he is surrounded by, is as fascinating as his observations about the time and place that he finds himself in.

I won’t go too far into the debate over eating fast food in foreign countries here, but I’ve always thought that an unexpected encounter with the familiar while traveling can be as eye-opening as any museum-going or “authentic” cultural excursion I might undertake.

I try to create those encounters with the familiar by stopping into a Burger King or a McDonalds, even if just to look, in almost every country I visit. In this story, Rolf Potts takes the idea much further – visiting a “cowboy resort” in Thailand to see their take on the American West. Hilarious and insightful as always.

3) Walking the Line, by Ryan Murdock

In this feature from Canada’s own Outpost Magazine, Ryan Murdock takes on one of the toughest walking trails in the North West Territories – and as in all the best adventure stories, the trip doesn’t turn out as he expected. Beautifully written, and mixing history in with the main narrative, the story also includes a spectacular shot of the Northern Lights as a bonus. Here’s a quick excerpt:

“The beauty of the North is cold and unforgiving. It isn’t malevolent, simply indifferent. The land is tolerating you and that’s all. You realize how easy it would be to die out there. You feel dwarfed by the land and by time, and you come to understand the folly of the day-to-day with its shallow self-importance. In the bigger picture, your existence doesn’t matter very much, nor do your hopes, dreams or schemes.”

4) Things Come Together: A Journey Through Literary Lagos, by Frank Bures

A night out at an author’s book reading might not strike most people as fodder for a good travel story, but this story by Frank Bures proves those people wrong. It is about a night in Lagos with some of Nigeria’s new literary elite, and it mixes history, literature, and some great dialogue with the young authors. Not to mention one of the more enticing descriptions of a city that I have ever read:

“In Lagos, there is a story on every corner, a novella standing in every doorway. The wind blows poems across the city like the bits of trash cover it. Lagos is a huge Dickensian space full of heartbreak and humor and millions of souls putting themselves up against the hard edge of the world. The city is pulsing with stories that flow through its streets.”

Hide your piggy banks, folks. If you’re anything like me, writing like that will make you want to book a flight.

In yet another unexpected encounter with the familiar, Jim Benning spends an evening at a Sizzler restaurant in southern Thailand.

I had the pleasure of hearing Benning read this essay this past summer at the Book Passage Travel Writers and Photographers Conference, and it’s the best defence I’ve come across yet for my occasional forays into chain restaurants and fast food outlets around the world.

A thoughtful meditation on the familiar, the exotic, and the blurred lines between the two.

Have you come across any great travel stories recently? Share in the comments!

Eva Holland is a historical researcher and freelance writer based in Ottawa, Canada. She is a blogger for World Hum and for Rolf Potts’ Vagablogging, and her travel writing has appeared in The Ottawa Citizen, The Edmonton Journal, and Matador Travel.
What did you think of this article?
Meh
Good
Awesome
Bookmark
Posted In
Travel