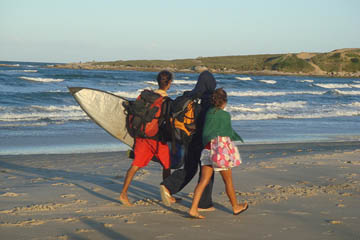 What does this latest batch of quality travel stories have in common?

Aside from flawless description, intrepid reportage and the all-important inclusion of details that resonate with the reader and illuminate broader themes, each of these stories was blogged or featured at WorldHum.com.

WorldHum is the first place I look for quality travel writing online, and one of only a few sites that I check every single day.

Founded in 2001 by the accomplished travel writers Jim Benning and Michael Yessis, WorldHum chugged along on a shoestring budget for years, developing a well-earned reputation for literary excellence before being acquired by the Travel Channel.

While the Matador / BNT team hopes to someday challenge WorldHum for the designation of “Best darn travel writing Web site, period,” we’ll always be thankful to Jim and Michael for pioneering online travel media – and recognize that only WorldHum is truly “av og for intellektuelle vagabonder”.

1. “The Mecca Of The Mouse” by Seth Stevenson

Seth Stevenson, a good writer with a nose for irony, voluntarily (shudder) spends 5 days in Disney World, on a mission “to figure out what the hell’s going on in this place”.

To your faithful editor, who spent the better part of today in a hammock reading Brave New World, Seth’s take on the Mouse Empire is downright creepy:

I’ve come to the conclusion that Disney World teaches kids three things: 1) a meaningless, bubble-headed utopianism, 2) a grasping, whining consumerism, and 3) a preference for soulless facsimiles of culture and architecture instead of for the real thing.

The most important story of our time is the uncontrolled economic growth ravaging China. The best magazine in the world is National Geographic. The best American writer who specializes in China is Peter Hessler.

Little wonder, then, that Hessler’s latest National Geographic article on China’s economic explosion was recently nominated for a National Magazine Award. It will electrify you.

3. “The Serenader” by Steve Wilson

Anyone who has ever worked the night-shift or drunk-dialed a lover will appreciate this story. Roberto is a mild-mannered Mexican serenader who plays guitar outside women’s windows at night at the behest of their guilty husbands or lovelorn suitors.

A snatch of digital audio in the midst of the story is an unexpected extra treat.

Former Vietnam War journalist and peacetime Hanoi correspondent David Lamb follows decades of tragic history along the former Ho Chi Minh trail. Lamb uncovers bodies, bomb craters and stories of stoic heroism, but also finds that the Vietnamese are ready to pave over the wounds of history and trade in their water buffalo for motor-scooters.

5. “Black Gold and the Golden Rule” by Jeffrey Taylor

Finally, here’s a WorldHum original about petro-state repression and one man’s inexplicable capacity to turn the other cheek.

[His] livelihood depended on his service to an industry that was poisoning his land and polluting his water, on the resource that fueled the high life in the West and helped keep his people poor.

When I asked if he was angry, he shrugged.

“I just try to manage, to help Mama and manage. No time to think about big issues.” He swatted a blood-battened mosquito on his neck. “I’m lucky to work, and I’m thankful to God. Thankful to God.”

Come across any great travel stories on the web? Share a link in the comments below!