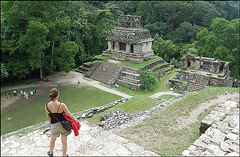 This week Tales From the Road travels from the summit of Everest to motel room floors haunted by ghosts of dead rock stars, from the high desert of Ladakh to a lonesome highway in Chiapas.

These stories celebrate the joy of spontaneity, channeling the blazing roman candle spirit of Jack Kerouac, but they also take time to consider deeper themes: the effects of economic globalization on traditional culture and the proper place for trust and fear.

In the words of writer Ben Brazil, whose story from the jungles of southern Mexico rounds out this week’s edition, travel is most magical when it’s approached as an “unscripted journey open to chance encounters and random weirdness.”

So hit the trail, prepare for epiphany and hardship, rot-gut and revelation. Open your minds and hearts and trust in the power of the open road. Just remember the importance of trust, and the necessity of fear.

1) “Let’s Spend the Night Together” by Chris Epting

There’s nothing like a good ghost story to raise goose-bumps on your arms. When a ghostly tale is combined with a travel pilgrimage and set to old-time rock ‘n roll, the result is a great story that will tingle your scalp and stoke your wanderlust.

Chris Epting tracks down the ghosts of music legends like Janis Joplin and Gram Parsons by staying up late in the motel rooms where they died, listening to their last albums and reading their most soulful interviews.

His story is one of the best in a terrific new edition of the online magazine Perceptive Travel, which regularly features smart, edgy and funny travel writing that you just can’t find in mainstream travel publications.

2) “The Distance Between Then and Now” by Bill Belleville

Worldhum.com is celebrating the 50th anniversary of the publication of “On the Road,” Jack Kerouac’s inspirational Beat manifesto.

The exuberance of On the Road still resonates today, but like an exploding Roman candle, Kerouac’s fiery brilliance burned out too fast.

Bill Belleville’s reminiscence about a not-quite Kerouacian road-trip of his own is a great story, not just because it’s an entertaining travelogue, but also because Belleville writes about his spontaneous road-trip from a perspective Kerouac never achieved: the content nostalgia of responsible middle-age.

3) “Learning From Ladakh” by Josh Kearns

I’ve been waiting for a blog from Josh for a long time, and “Learning From Ladakh” doesn’t disappoint: it’s hands down the best thing I’ve read in months.

Josh offers a sweeping critique of the global economic system, informed and contextualized by his experience living and working among traditional farmers in Thailand and Ladakh.

The article is long, but stick with Josh until the end – his is an important, articulate and truly inspiring message.

What does it take to ski down Mt. Everest? Experience, oxygen, cash and “the right mix of fear and confidence.”

Mountaineering guide and travel writer Dave Hahn was on top of the world when Kit and Rob Deslauriers and photographer Jimmy Chin strapped on skis and carved down the summit ridge to the Hillary Step.

You don’t need to ski down Mt. Everest to have a great trip (or write a great travel story), but it certainly doesn’t hurt.

5) “Chiapas, Without Reservations” by Ben Brazil

Putting together Tales From the Road each week, I’ve discovered some travel writers who I can always count on for a a great story. Ben Brazil is rapidly becoming one of my favorite story-tellers.

He seems like the kind of guy I’d like to travel with – someone who isn’t afraid of sticking out his thumb and seeing where the road will lead.

In this story about traveling the Chiapas Highway with his new wife, Ben celebrates the thrill of spontaneous travel, setting off on an “unscripted journey open to chance encounters and random weirdness.”

Travel ideas for your 2020 summer trip Promoted
Sorry, summer. Fall is the ultimate road-tripping season.
7 long-weekend adventures by rail to get you into nature Promoted
Understanding the benefits of train travel in 2020 Promoted
20 of the funniest idioms for people learning English