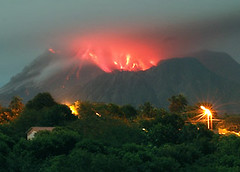 And with a new tube in my rear tire, I pedaled off along the St. Lawrence in the general direction of Halifax.

It’s not the places you go, or the things you see when traveling that are most memorable. It’s the people you meet – the helpful strangers along the way who remain in your thoughts for years to come.

Last night, I had the great pleasure of staying with Claude LeMay of Baie St. Paul, Quebec.

Claude put me up in his house overlooking Isle Aux Coudres, and we stayed up late in front of his woodstove, talking about the artists of Baie St. Paul and the mining town in Labrador where Claude grew up.

A few hours before, Claude had been a stranger, a random profile on the hospitality sharing website www.couchsurfing.com. When we said goodbye this morning, he was my friend.

This edition of Tales From the Road is about people – soldiers, farmers, BASE jumpers, record breakers and a Lady in a Mountain. It’s dedicated to strangers, who, as we travel, become our friends.

1) “The Penitent Legionnaire” by Robert Ward

In this gem of a story from the Camino de Santiago pilgrimage in Northern Spain, Robert Ward writes of his encounter with a modern day penitent, a retired French legionnaire.

In conversations about his past – fighting in the jungles of Africa and trading gunfire with a Mossad agent in Lebanon – the former warrior shares the wistful sort of wisdom that comes from a life spent fighting secret battles in distant lands.

Ward’s careful use of detail and unassuming tone allows the story to unfold naturally, capturing not only facts and dialogue, but the feel of the encounter as well.

In chapters 1 and 2 of a 4 part series, David Miller profiles the denizens of “Primal House,” a home-base for extreme athletes in Squaw Valley California.

Primal House is not your typical A-Frame – there’s both a climbing wall and a trampoline, and as Miller writes “the trick was to jump from the loft, bounce off the trampoline, then grab one of the holds, and stick it.”

David sticks the writing in this profile, serving up a dose of inspiration so strong you might just paint your face black and jump off the side of a mountain.

3) “Letter to a Volcano” by David Wallis

I always mean to write letters to the people I meet on my travels, but somehow my best intentions always fall prey to distance and lack of urgency. Not David Wallis.

He was so struck by his encounter with The Lady in the Mountain on the Caribbean island of Montserrat, he wrote her a letter – and published it too!

Of course, since the Lady in question is a volcano, I hope David isn’t holding his breath for a reply.

In all the media hullabaloo over Steve Fossett’s mysterious disappearance in the Nevada desert, a true portrait of the man and his motivations is lacking.

Tim Zimmerman rode shotgun with Fossett during his record breaking voyage across the Atlantic Ocean in 2003.

Zimmerman’s article, published in Outside Magazine, is a tightly written adventure story, but also a reflective profile of a man driven relentlessly toward risk, always pressing higher, faster, farther.

It’s not a travel story, exactly, but Lisa Hamilton’s elegant portrayal of Japanese farmers devoted to building World Peace through a mutually respectful and fulfilling relationship with Mother Earth really moved me.

When I lived in Japan, I met a man named Benzo who was 90 years old and lived in a house he built himself from the wood of trees he planted himself decades before. Everything Benzo ate, he grew in his garden.

Benzo is the happiest, most energetic and healthiest old man I’ve ever met. This article is about farmers like Benzo, and the deep joy and contentment that can be found by living with the land.

As a little bonus this week, here’s a link to my latest story, a narrative travel guide to backcountry fly-fishing in the Lamar River valley, one of the most remote areas of Yellowstone National Park.

I hope you enjoy reading about my trip, and use the information in the guide to catch some trout in Yellowstone yourself!