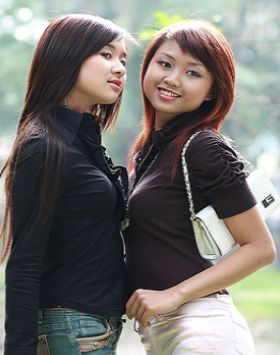 While London has become hostile toward tourists, a British couple decided it was time to show the queen their randy side…on the front lawn of Windsor Castle.

Perhaps they need a refresher course in proper sex etiquette, and therefore should join the Vietnamese youth who are getting sex education while on holiday.

Yes, rather than teach their kids about the fine art of reproduction themselves, some Vietnamese parents are sending them on tour with the Viet Da Travel Company, who has teamed up with the Da Nang City Youth Union to provide culturally specific sex education.

According to the news source:

Sex education remains an awkward subject for both parents and teachers in Vietnam because of the conservative attitude towards things considered “sensitive.”

The tour hits spots like the Cham Museum in Da Nang, central Vietnam. This particular museum holds many artifacts from the Champa Kingdom era, including quite a few lingams, which represent a phallus, and yonis, the symbol of the vulva.

Both are Hindu symbols associated with Lord Shiva, emblemizing the union of male and female and generative power.

After the Cham, the tour continues to the Son Tra Peninsula and makes it way onto the My Khe Beach. There, the teenagers play outdoor games focused on sex education.

“The tour manages to provide youngsters basic knowledge of sex and puberty without promoting sexual experimentation.”

It’s hard to gather from the article what types of games are played, or what exactly a college student means when he commented, “We gain soft skills and knowledge of sex more easily through these outdoor activities.”

But toward the end of the piece, the author notes: “The tour manages to provide youngsters basic knowledge of sex and puberty without promoting sexual experimentation.”

Definitely sounds more exciting than girls and boys being separated in the fifth grade to watch their own gender’s video on puberty. And I have to say I was pretty impressed a travel company and youth group has put this educational tour together in a mostly traditional culture, where it is customary to not touch a member of the opposite sex in public.

And according to the article, “many schools in the city are eyeing it as an interesting extracurricular activity.”

Hmmm. In a culture where four students, who received suspended jail sentences for posting a clip online of a famous soap opera star having sex with her boyfriend, it’s hard to believe all Vietnamese would jump on the bandwagon.

Do you think these sex education tours would be effective? Should they be offered elsewhere in the world? Share your thoughts below!