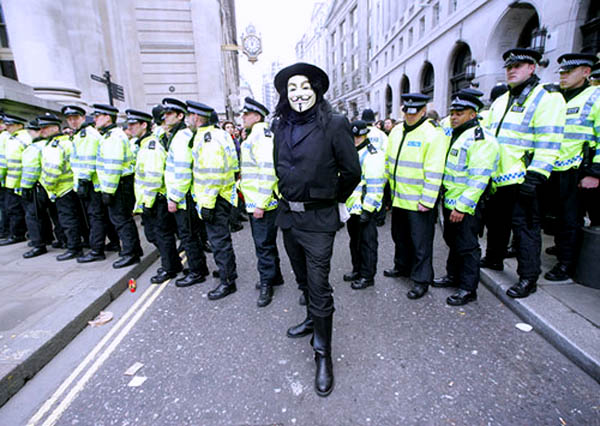 New anti-terrorism legislation expands police powers over London, including a ban on photographing some tourist landmarks. Is this the right way to face the threat?

Imagine yourself in London on one of its rare sunny days.

From Westminster to Trafalgar Square, passing through Whitehall, you notice the streets are packed with police officers. Quite normal, you assume, considering that within a few kilometers are both the Parliament and 10 Downing Street, the official residence of the British Prime Minister.

Obviously, the two horses standing at the entrance do not provide Gordon Brown with enough protection.

Excitedly, you head to Westminster with your digital camera to capture the best shots for your travel blog. You reach the ideal spot, you set your equipment in the green park of Parliament Square, just opposite Westminster, and shoot a perfect postcard.

Then you get arrested for terrorism.

This scenario is not as far-fetched as it sounds. In the wake of the new counter-terrorism Act issued by the Home Office, travelers may find it hard to bring home pictures from the most famous London landmarks if they happen to catch police officers in their shots.

The section 76 is a recent update to the Counter-Terrorism Act issued in 2001. For years, humanitarian organizations have accused the government of restricting people’s civil liberties, but only recently a wider sector of the population are becoming aware of this late measure. 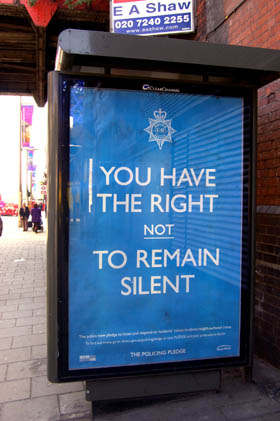 Londoners are speechless in front of these progressive counter terrorism measures. Are they living in a growing police state?

The latest amendments of the Counter Terrorism Act 2001, added in 2008 and effective from February 2009, are aimed at increasing the power of the police against any behaviour that “elicits or attempts to elicit information about an individual who is or has been a member of Her Majesty’s forces, a member of any intelligence services, or a constable.”

The G20 summit, held in London on April, 2nd, is still on everyone’s minds, not for the summit itself, but rather for the police violence that left many injured.

An unprovoked beating may have caused the death of Ian Tomlinson, who was hit by the police and died from massive internal bleeding. An autopsy revealed Ian died of a heart attack, though speculation remains the heart attack was triggered by his push to the ground. Meanwhile, another policeman has been suspended after being filmed while hitting a young woman.

The tension felt by UK citizens has been increasing – and now tourists are being affected, especially when they are stopped from taking photos. Many tourists like photographing the red double-decker buses, the sign of the London tube, both considered landmarks of the city.

Klaus Matzka, a tourist from Austria, was on holiday with his son. He was recently forced to delete all photos of public transports he had taken during his stay in London, as it was “strictly forbidden” as a measure to prevent terrorism.

A police official later offered an apology, stressing the ban is on photographing officers. Even so, Klaus said he would not come back to London.

While similar incidents have also happened between officers and photojournalists, the latest altercations involving tourists make everybody think that the government is going too far.

Citizens have started to wonder if this is the right way to face the threat of terrorism.

The constant pressure of CCTV cameras, the police campaign encouraging to spot any “unusual” behavior, the overall sentiment of being under control or pushed to suspect that “anybody can be dangerous” are proving counter-productive.

In addition to restricting freedom of action, the Metropolitan Police have launched an anti-terror media campaign through radio ads and posters on the tube, trains and bus stops.

The slogans read “A bomb won’t go off here because weeks before a shopper reported someone studying the CCTV cameras” or “These chemicals won’t be used in a bomb because a neighbour reported the dumped containers,” followed by a threatening “Don’t rely on others. If you suspect it, report it.”

Such messages are disquieting rather than reassuring. Many people are trying to understand what the government wants to communicate. The result of this campaign stokes fear and distrust towards our neighbors instead of collaboration, a sense of increasing isolation instead of feeling part of a community.

Citizens have started to wonder if this is the right way to face the threat of terrorism.

Everything Americans need to know about traveling to Mexico right now
The best stops on the Blue Ridge Parkway
These road trips were voted the 10 best in the UK
7 countries you can’t enter if you have a DUI
7 reasons why Portland, Maine, is the ultimate fall destination