SOMETIMES I get so involved in taking abstract photographs that I forget that there are other people out there.

Moving figures and images of pedestrians going about their everyday business can add a lot of dimension to your travel pictures; and getting a good picture, while on the road, may not be as difficult as it sounds.

This is not the same as portraiture, but instead, this type of photography derives from the advent of the lightweight rangefinder and SLR cameras that were developed after the second World War and the subsequent arrival of spontaneous street photography, by such luminaries as Henri Cartier-Bresson, Robert Frank and Lee Friedlander.

The first step compelling street photography is to go to a notable and newsworthy event.

The first step compelling street photography is to go to a notable and newsworthy event. This could be anything from a rock concert at Glastonbury to a soccer match or a street parade.

Take a close look at the surroundings and see if you can come up with photos of people doing actions like twirling a baton or waving to the crowd. Take some time to conceive the picture so that the person in the photograph has space to move about within the frame of the image.

When you go out onto the street, you need to take this relaxed attitude with you. Try walking by yourself and just wander – paying attention to the buildings and the landscapes. Shoot some pictures of these places first and then if you see some human activity that interests you, snap them too. 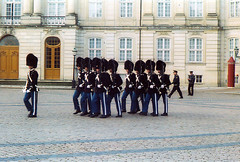 A relaxed, cheerful and honest attitude will help you blend in with the locals. You might see two people talking with an interesting tree or building in the background. That tree is important, too. You are not trying to do portraiture; that requires a different tact. You are just interested in the everyday rhythm of people going about their business in the context of the local landscape.

Also, it seems that the more intensely you are into the creative process, the less intrusive you will be. This attitude could be easily paraphrased as the Zen of photography.

As your mental concentration and awareness of surroundings increase, you might have the slight air of someone who is meditating. Most extraneous sensual information will be blocked out by your mind, so you can concentrate on the immediate task at hand.

The alignment of the subjects for your picture should be the most important thing in your mind. Take and idea and go with it. You might like where it takes you.

Don’t get so lost in the Zen of photography that you forget to interact with people.

Another important thing is to avoid taking pictures while participating in a group tour. If you are going to get any unique pictures, you need to be by yourself, or traveling with just one or two other people.

Tour groups are great for learning about the history of a place, but they will hinder your attempts at candid, non-invasive photography.

Also of importance is the type of camera that you use. With the advent of digital cameras, there are many light and compact point-and-shoot cameras available that still deliver a high resolution image that can be blown up to an 11 X 14 size or larger.

With one of these small cameras in hand, it’s much easier to blend into the crowd. A big expensive camera with an equally impressive gear bag may be great for chasing J-Lo around the night-clubs in an attempt to get that one shot for the pulp mags, but it’s an unwelcome attention-getter on the street.