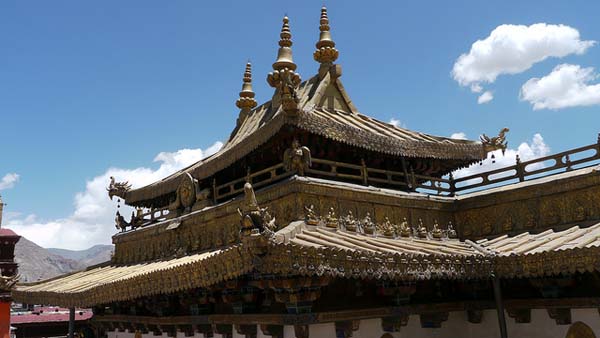 Americans are obsessed with the notion of control. The control is just an illusion. ~ Lee Barnes, writer

BEAN, THE 10-MONTH OLD gray tabby, is possessed to leap up on the old dresser that serves as the center for my faith in what little I know of Tibetan Buddhism, and all I am learning about the nature of impermanence — a knowledge both unwelcome and irresistible. The dresser top is, more accurately, an altar, a flat-topped block used as the focus for a religious ritual, esp. for making sacrifices or offerings to a deity, my dictionary says. 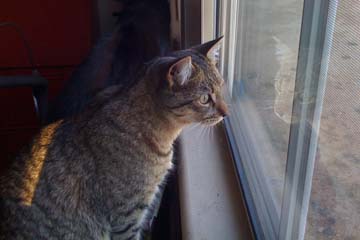 There is no demanding god here. There is no religion. There is only the sacrifice of most of what I once believed was permanent. There are offerings, not to be consumed in flame or carried away on a river, but objects and images to remind me of what matters. Each reminder has its own place, its own proximity to another.

There is a book of Tibetan photos and words. Behind it, a picture leans against the mirror: two Chinese soldiers walk away from the body of Kelsan Namtso, the Tibetan Buddhist nun that they have just murdered. She lies in the snow. The only color in the picture is her saffron robe. All else is the snow, gray boulders, and the black figures of the soldiers.

There is a postcard of Tibetan Buddhist monks singing. A Black Hat dancer wears a ceremonial apron embroidered with the terrible and gracious visage of Mahakala, the deity who eats that which is in the way of joy — if you regard joy as knowing you will most certainly die and, therefore, this moment is the best in your life.

Two books of collaborative art and poetry (made by poet Gail Wade, his students, and me) lie on top of a photo of the black and white crippled cat, Stretch. He is not the only ghost cat on the dresser. There are tatters of brindle fur that once belonged to my good cat Harold, seized by a coyote in early summer. 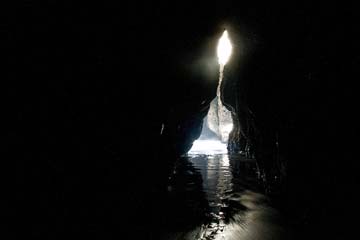 A collection of Rumi poems, the Witches’ Almanac, and my journal are stacked in front of the collaborations. Beneath them is the 1948 edition of the Classics Illustrated Arabian Nights, the comic book that opened my way out of dark cave after cave after cave; below it lie more photos of my beloved dead.

A gray, pyramidal rock with a black dot in one side, and a Northwest Raven medallion hold the Tibetan book of photos open. Today’s reading from Sogyal Rinpoche:

Why, if we are as pragmatic as we claim, don’t we begin to ask ourselves seriously: where does our real future lie?

There is more on the dresser: a baby spoon, a broken heart-shaped dish my late mom gave me, a lace agate shaped exactly like a woman’s yoni, and a tape of chanting by the Gaden Shatse monks. There is the wristwatch that stopped on 9/11/01. There is the grooved rock in which I put a chunk of cookie for Mahakala when I ask his help in ripping out my hard heart. 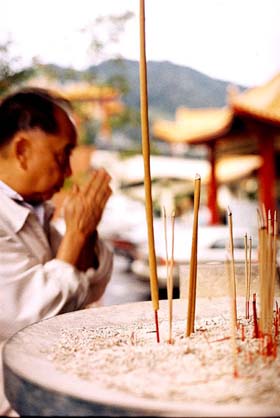 Mr. Toad from Wind in the Willows sits on top of the mirror. He wears a red-striped frock coat, blue pants, and a blue bow tie. My velvet prayer beads bag hangs below him. It contains the string of twenty bone beads on which I count my morning prayers for the furthering of all sentient beings and the protection of earth, air, and water.

I murmur the prayer as Bean mounts his ninth assault on the dresser. He tries to capture Toad. I go toward the dresser. Bean leaps off. As soon as I settle back to my prayers, he leaps in my lap and grabs the beads.

We both hang on. In that instant, I imagine a temple altar. The monks or priestesses or rabbis or imams responsible for the altar believe that in order for the Holy to be present, the sacred objects must be placed and aligned with absolute precision. The work of tidying and arranging the altar has just been finished. All is ready.

A mouse races across the shining tiles of the temple floor. One of the temple cats is within paw’s reach. The mouse scurries up on the altar. The cat follows.