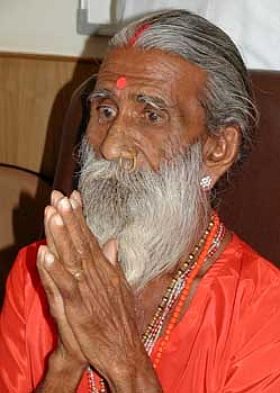 I’ve been caught in a bit of a mind-fuck the last few days.

Giving myself some compassion around the obsessive nature of it – breaking up is hard to do, right? – I still needed to get out of the stuckness. This morning I got some relief in my meditation, one based on calling my energy back to myself.

It made me think about how much energy we extend out into the world, into our work, into our interactions with others. We wonder why we feel so drained, besides the fact that we’re on go all the time. It’s energy out, without pulling enough energy back in.

Which brought to mind the news I read earlier this week about an Indian yogi who was under surveillance by Indian military doctors. The point? To prove his assertion that he has not consumed food or drink in seven decades. Yes, he easily survived the two weeks, all vital signs intact.

Of course, the military wishes to figure out exactly how he survives, so that they can train soldiers to live without these life necessities. Oh, and you know (as an afterthought), “save the lives of people trapped in natural disasters.”

Putting aside how the powers-that-be will use this information for evil and not good, maybe a more important thing to think about is what he is living on. Outside alternative energy sources, such as the “sun”, as the article notes, are probabilities. But what about the one renewable energy source that can’t be taken away because it resides within us?

What about the one renewable energy source that can’t be taken away because it resides within us?

Yes, he may have been “blessed by a goddess”, and yes, he is an abnormality. But my little 15 minutes of calling back energy to me and mantra-ing my wholeness changed my whole outlook for at least the morning. Imagine working on that energy exchange and flow with the world on a consistent basis – maybe you wouldn’t give up food, but what about those pesky little addictions that numb pain?

The Yogi returned to his village in northern Gujarat to resume his yoga and meditation practice. Yeah, if they took those things away, then they might understand what kept him alive.

If you could let go of anything that holds you back, what would it be? Share what it is in the comments below.

Energy and flow can come from even the most common of places, as noted by Leigh Shulman in A Meditation On Washing Dishes.