Maarten Troost is the author of three books, all of them poignant and hilarious. Fans of his work know him as wry, witty and a little touched.

Troost’s latest, Lost on Planet China or How I Learned to Love Live Squid,

is a fantastic primer of a country that seems to ride a fine line between brilliance and absolute madness. 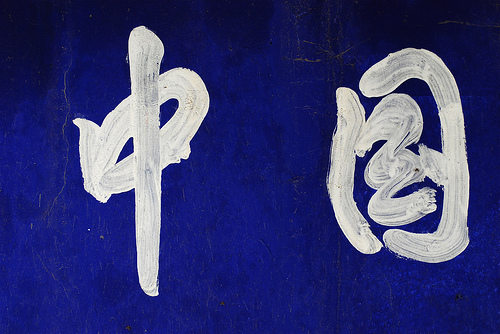 Your two previous books (The Sex Lives of Cannibals: Adrift in the Equatorial Pacific

and Getting Stoned with Savages: A Trip Through the Islands of Fiji and Vanuatu)

have been written about periods of time when you’ve lived elsewhere. Lost on Planet China is about one trip, yet seems to pack more action per page. Is this just because China is so goddamned big and crowded?

Or it could be because more so than the first two books, which were about living in faraway places and kind of reflective and essay-ish, the China book follows the well-established conventions of the travel genre, where the movement of the author is the little engine that propels the book onward.

In the first two books I could linger for an entire chapter on something small – like the cannibalism that befell the canine community on the island of Tarawa, for instance – and use that to make some kind of larger point about the hardships of atoll-living.

In Lost on Planet China I felt compelled to keep things humming along, partly because as you noted China is indeed a big-ass country and to write a somewhat comprehensive book about it while trying to keep it – the book – at a manageable size necessitated a zippy pace.

Once I decided to write this book in a travel genre kind of way, the action-per-page factor was sort of preordained, if that makes sense.

Keeping notes in a communist country that doesn’t enjoy scrutiny would give me The Willies. Did you ever worry about being found out?

One thing that China does exceptionally well is that it has an uncanny ability to make individuals feel really, really small. I felt like a tick on a dragon in China. 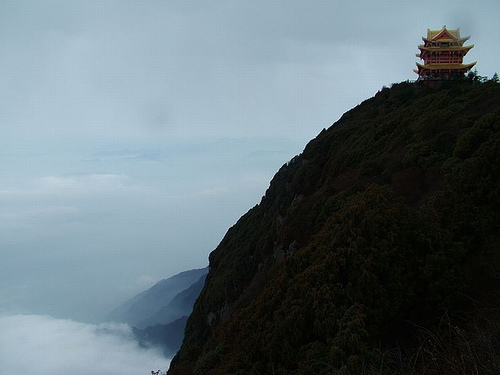 Everything about the country – its immensity, its enormous population, its architecture, its history – has a way of reducing an individual to near insignificance.

So I felt pretty free whipping out the old notebook whenever I encountered a noteworthy experience. Indeed, people were often drawn to watch as I scribbled what for them were the inscrutable lines and jots that constitute our letters. It was strangely gratifying knowing that my writing was as mystifying to them as their calligraphy was to me.

I learned quite a bit about spitting from your book. Could you explain to the novice just how much of it goes on in China? 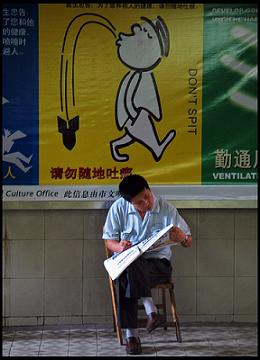 No place on earth celebrates the loogie quite like China does. At any given moment in China, there are millions of people hawking enormous globs of phlegm and expelling them in great cascading arcs until they splatter on streets and sidewalks. It’s done for medicinal reasons, a way of expelling bad elements from the body.

The government has observed that westerners find the habit strange and more than a little icky and so they’ve undertaken a campaign to stifle the spitting. I can only hope that they fail.

Having grown up in a loogie-sensitive culture, to suddenly encounter a nation of hurling spitballs is one of those up-is-down, black-is-white experiences that periodically makes traveling so gratifying. I should note that I mean that in the broad, philosophical sense and not as an endorsement of spitballs and the like.

By page 50, you had pretty much predicted the financial crisis that was coming in America and done so (I’m guessing, given publishing deadlines) 10 months in advance. Yet most Americans seem dumbstruck about what is happening. Are most people just that ignorant or are you just that enlightened?

What to say here? I’m not happy with this. There is no gloating. In fact, this terrifies me. I–the C student in macroeconomics–could see this coming, while Ben Bernanke, Alan Greenspan, Hank Paulson et. al. could not. Every American should tremble in fear.

But where I think I had the advantage in terms of forecasting accuracy was that from 2003-2005 my wife and I were homeowners in the greater Sacramento area (long, digressive story). This put us in the belly of the beast that was the housing bubble.

For two years we listened to baristas at Starbucks talk about their investment properties and hairdressers at Great Clips discuss their imminent retirement now that they owned twelve houses in California, Arizona and Florida.

I had begun to wonder where, exactly, was all this home purchasing money coming from, which led to some investigating of the mortgage market and the mortgage securitization process.

In no time at all I was studying the Credit Suisse ARM reset chart and the long term Case-Schiller home price index and that got me looking into the historical relationship between home prices and household income, and it wasn’t long before I came to the inescapable conclusion that we as a society, as a nation, are utterly scroomed.

But I wish I was wrong. 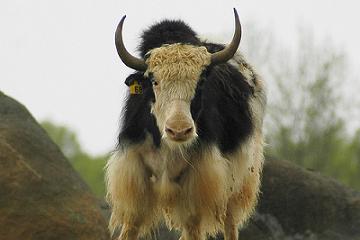 Delicious. However, I have spoken to others who have become wretchedly ill upon the consumption of yak. I don’t think that was the yak’s fault though.

You’re kind of a big sissy when it comes to airplanes. How do you deal with the fact that you have spent so many hours on them?

The words “big sissy” kind of understate the problem. I have issues with airplanes and after many hours of discussion with flight attendants and pilots I realize it’s not going to get better. I’m just hard-wired that way. There’s nothing that can be done. It might be a fear of falling issue. It might be a loss of control issue. I’m not sure what the root cause is.

But in any event, after many hours of chatting with air travel professionals I realize that my DNA does not lend itself to panic-free air travel. So whenever possible, I drive or take the bus, or ideally, a train. But, of course, given what I do, I am often obliged to fly.

And so I get on the plane because the alternative – a hermetic, stationary existence – is unacceptable.

I’m holding your hardcover book in my hands. What do you think of the fact that the written word may go the way of The Kindle, no longer bound by paper and glue (and a honey mustard stain)?

Possibly because I was abroad for most of the nineties and therefore missed the great leap forward into the digital age, I remain firmly in the dead tree camp. I cannot imagine a world without physical books and I don’t expect to see such a world in my lifetime.

But hey, whatever. If others prefer to read book-length material on a screen, so be it. It’s not as if the book publishing industry can afford to be picky.

Do your kids have any comprehension of what you do for a living?

And then I’m gone.

For a month, two months, three months, I’m gone, somewhere on the far side of the world. And then I come back and it’s all good. And then there’s the deadline, which I tend to miss, and everything goes to hell for a while. Finally, there is a book. And then we start anew.

You’ve just been to India. Is there a book coming? How do they rate on a worldwide phlegm level?

Phlegm is not an issue in India so I’m not sure if I can get a book out of it. I jest.