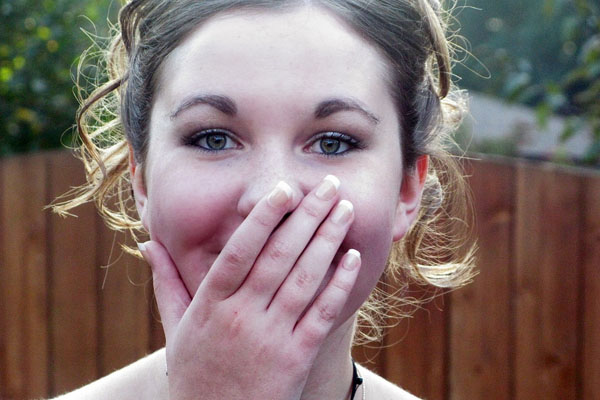 Jonesing for a look into the souls of the Matador team? Here are some of our most guilty travel pleasures.

Everyone has a guilty pleasure. Maybe you sing along to Kelly Clarkson when no one’s looking, watch Golden Girls reruns, or spend afternoons on the couch reading celebrity gossip magazines. The point is, you know you shouldn’t, but you can’t help it.

But sometimes it feels good to just air it out. Tell the world proudly, without a hint of shame, “Yes, I wear women’s panties and I don’t care what you think!”

Guilty pleasures are about something more than meets the eye. They can act as a window into the internal self; who we are beyond our cool guy (or gal) exterior. These pleasures are what make us real, flawed, human, and just plain fun to hang out with.

Yes, I wear women’s panties and I don’t care what you think!

After all, who wants to be around Mr. Boring/Perfect all the time? Give us the guy who somehow tracked down the Facts of Life and You Can’t Do That On Television DVDs any day. Or the chick who secretly prefers a bacon double cheeseburger and a beer after a long hike.

Just for kicks, we’ve compiled a list of our travel guilty pleasures. So, here you go. Take a deep look into our souls…and offer up your own guilty pleasures in the comments.

Come on, we know you want to get it off your chest!

Carlo (@vagab0nderz): Mine’s a literal guilty pleasure. In China I could not get used to the blatant staring. I tried to ignore it, but eventually gave up and started to snap. I turned to striking up one way conversations with the starers, speaking in loud English of course. “Hey. How’s it going? Like what you see? Anything else I can do for you?” That sort of stuff. For me it was a pleasure in that I wasn’t holding the feeling inside anymore, but letting it go. The guilt was from me being a bit rude. But they never understood anyway. Or did they? 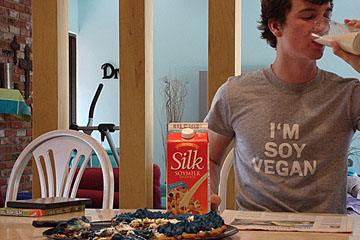 Christine (@livingholistic): When I was vegan, demanding we go through hell and high water to find me meat-free, dairy-free, honey-free, food (definitely my pleasure and not anyone else’s who was traveling with me!). Nowadays, it’s probably drinking coffee and eating whatever the hell I want and saying, “I’m on vacation, damnit!” (even if it’s more like four months of travel).

David (@dahveed_miller): I love getting my hair cut in local places when I’m traveling / living abroad. A couple standouts: Punta Abreojos in Mexico. A woman there gave me a haircut, then without me mentioning a shave she whipped out the razor. Ok. That’s cool. When she was done I looked in the mirror and she’d fully styled me out with the haircut, shave, and a tight little mustache. I left it for a day.

Eva (@evaholland): Cheesy souvenirs. I am powerless before their tacky, silly, Made-in-China charms. However, I’ve recently limited myself to semi-useful items like fridge magnets, mugs and notebooks. That helps to reduce the clutter and post-trip regrets, a little.

Hal (@halamen): I’m gonna steal one from Teresa. Though I usually try to keep the accommodation costs down, sometimes I splurge for a room with cable TV to catch up on all that quality programming I’ve missed.

Another, allowing myself to think I’m better than the backpacker passing through town for a couple days, just ’cause I’m staying for a month. In fact, I’m experiencing this one as I type and can say it generates a lot more guilt than pleasure. 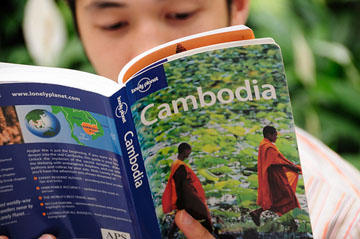 Ian (@ianmack): Busting out the guidebook. Of course, I often ask other backpackers/locals for the hidden hole-in-the-wall gems… but when I’m stumbling off an 8 hour bus/boat/plane ride, the guidebook recommendations are gospel.

Jen: Any restaurant, anywhere, that serves bottomless sodas. I admit it, I’m an addict, but I bristle when I have to pay for more than one hit.

Juliane (@JulianeH): The boys. What can I say, I’m a bit of a dog. I love checking out each country’s eye candy.

Julie (@collazoprojects): Because I’m blonde, lots of locals in the countries I frequent (Latin America, mostly) think I don’t speak Spanish fluently. I’ll let them chatter on for a few and then edge in on the conversation and totally get off on their surprise that I speak Spanish. I’m addicted to the way the dynamic suddenly changes and I’m brought into the fold. I’m also really addicted to digging into a place and staying a while and becoming as local as a gringa can become.

Josh (@joshywashington): My guilty travel pleasure is wistfully watching some local beauty round the corner and out of sight wondering what it would be like to be with her, or be her… 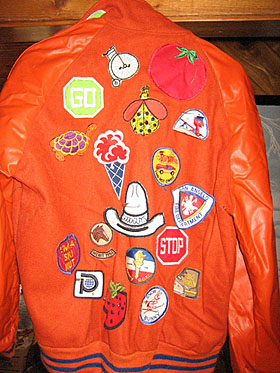 Lola: Patches. Not just any ol’ country patch, but really cool, simple ones with nice edges that I can easily sew onto a fleece jacket or top. After sewing on the first 3, the rest have joined (and keep joining) the “pile”. Apparently I don’t have enough fleece tops.

Michelle (@StrayNotes): Mine’s kind of like Julie’s, but kind of the opposite, too! I whip out the Portuguese when I don’t want someone to know I speak English. Here in Korea, it’s not unusual to sit next to someone on the subway that wants to practice their English with you. (And usually, they need a lot of practice!) I don’t want to be rude, but teaching English six hours a day is enough for me! So “não falo Inglês” has come in handy a few times. 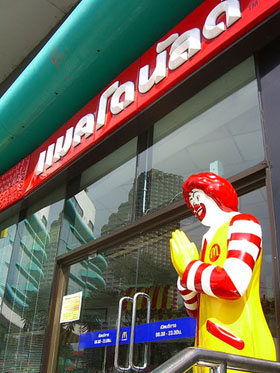 Nick (@pharaonick): If a taxi driver catches my eye whilst I’m trying to cross the road, I’ll let him screech to a halt, as if I need the ride. I’ll then saunter up to him and ask where it is he needs directions to. Naughty, but you take your small victories where you can!

Ross (@rossborden): McDonald’s. Besides the occasional Egg McMuffin at 6 AM on the way to a Tahoe day trip, I literally don’t ever eat at McD’s in the US, but when traveling this is not always the case. Sometimes when you’re in a train station, or it’s late and nothing else is open, or you’re simply starving and don’t feel like taking a gamble on some little hole in the wall across the street, McDonalds provides predictable regularity that I crave.

And more often than not, between tearing into my Quarter Pounder with cheese and stuffing handfuls of golden fries into my mouth, I strike up a conversation with some cute locals. I went to a McDonald’s in Stockholm at 2 AM and it was like a discotec in there. Right at in the center of the nightlife district, this place was three stories tall and packed with young people straight out of the bars. We ended up chilling in there for 20 minutes after we’d finished eating, shooting the shit with a bunch of college students.

Sarah: Doing nothing at all. Spending entire days reading or camping out in a nowhere city, and giving a pass to all the traveler-themed things I should be doing (seeing orangutans, visiting temples, doing something “cultural,” etc.)

Teresa: I love staying in hotels. Even cheesy chain hotels. I love the tiny shampoo, the white towels, watching horrible American TV on cable. And when they give you one of those teeny coffee makers? Aaaahhh. 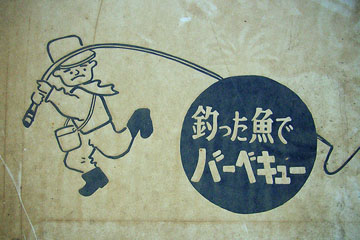 Tim (@TCPatterson): I can’t stop myself from pulling the odd prank while on the road. In Japan I would sometimes go fishing with a fly-rod in parks and shopping malls. A ¥1,000 note makes great bait, and I would catch everyone from old ladies to salary men. No hooks of course, just tape, though once my line got tangled in the spokes of a man’s bicycle.

In Boulder, Colorado, I switch it up and go hippie fishing instead, replacing the money with a joint rolled with oregano. One time a bum chased that joint 3 blocks down Pearl Street. The best spot for hippie fishing in Boulder is the back steps of the Downer.

Tom Gates (@waywardlife): Pizza. I’ve been collecting my Worst Pizza pictures over the past six months, during my trip. No matter how bad I know it’s going to be I still can’t resist ordering it when I’ve overdosed on local cuisine. So far Chile takes the lead with this beauty. Note that the cheese is not melted and that the ham (cold) is about an inch thick. And yes, those are cherries on top.

Don’t be shy, tell us your dirty little secret below!

With special reporting by Carlo Alcos.

The 25 coolest towns in America to visit in 2021
14 airports where you can get tested for COVID-19 in the US
The best free and low-cost things to do in Kauai
This hotel lets you name your price and more — will others follow suit?
The world’s 9 newest countries and their paths to becoming independent nations