THE FIRST TIME a grown man ever kissed me was during Ramadan. I was at a posh all-night iftar buffet in the dusty outskirts of Cairo with my fiancée, Kristina, when I ran into Mohammed, an Egyptian acquaintance of mine.

He greeted me with a smile as warm as the night air. His arms, open. Kristina saw the panic in my eyes but shouldered me toward him anyway, giggling in anticipation of what she knew I’d been trying to avoid.

He leaned in for the customary Arab ‘man-hug.’ The stubble of his cheeks pressed against my own, his pursed lips firmly planting on both of my cheeks – first the right, then the left. After he’d finished greeting me, he continued to hold me at arm length, looking at me puzzled.

“It’s my first time being kissed by a grown man,” I explained. He and Kristina both burst out laughing. He patted me on the back and told me get used to it ‘cause, after all, “This is Ramadan, habeebi.” 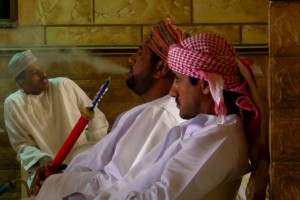 Ramadan and I just don’t get along — but being kissed by men is not the reason why. I do love the idea of it. It’s just what actually goes down during Ramadan that scares me enough to make me think twice about leaving my apartment.

Don’t get me wrong — gorging myself on a Thanksgiving-style meal of epic proportions every night for a whole month while watching television debuts till the wee hours of the morning sounds like decadently good fun to me. And to have this month of nocturnal feasting and marathon television viewing to be followed by an entire week off from school and work to celebrate Eid Al Fitir (during which I get to barbeque and hang out with all my friends and distant family that I only get to see once or twice a year) sounds like a killer party.

And that’s just the fun stuff. There’s the spiritual side of it, too. The idea appeals to me: to temper earthly desires, to empathize with those who suffer the pangs of hunger and thirst, and to improve conscious contact with God through prayer by abstaining from food, water, and sex (and smoking even) during daylight hours.

But just as there are some Christians who criticize Christmas for its over-consumerism, price gouging, and negative health effects, so too are there some religious types who find fault with what actually happens during Ramadan.

Sheikh Salim Al Amri, a local Imam at the Al Hail mosque in Muscat, Oman bemoaned the nocturnal overindulgence and over-consumption in a recent front-page article in the Times of Oman.

Instead of devoting their spare time to do good, we see Muslims celebrating night to dawn by smoking sheesha, eating lavishly, spending more money that they can afford and addicted to television serials.

Sheikh Salim is not alone in his sentiments either. Another religious leader, Sheikh Ahmed Al Abri, the Imam of Maabela Mosque (also in Muscat) warned the worshipers at Friday prayers to guard against gluttony in food and shopping at this time of spiritual renewal.

Many people have endless plates of food placed on their tables at iftar. They later go out shopping to buy things they don’t need. Restaurants and shopping malls are full at night in Ramadan. Why don’t they spend their time and money on good causes instead of filling their bellies and throwing their money like this?

We know a lot about throwing money around in the US, especially during Christmas, when many proprietors make their profits for the entire year. It’s no different in the Middle East during Ramadan. The pressure to make a buck is such that some unscrupulous entrepreneurs raise prices in anticipation of the biggest shopping time of the year in the Muslim world.

Sheikh Abubakar Giro, an Islamic scholar in Nigeria, condemned such price gouging on food at the onset of Ramadan and pleaded with retailers to resist the temptation to make fast money.

In Qatar, price hiking during Ramadan is such an issue that the Trade Ministry had to step in and put price caps on 156 different food items. Despite this government intervention, the price of fruits and vegetables continue to rise.

In Cairo, The Daily News Egypt reported that the Chamber of Commerce announced that food prices during Ramadan would increase as expected due to the cost of domestic raw materials rising by 50 percent in anticipation of rising demand. 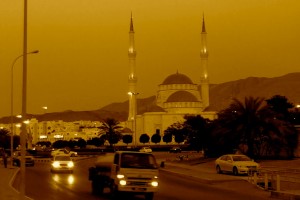 Besides price gouging, there’s also the inconvenience factor of Ramadan. Almost all restaurants, supermarkets, and convenience stores are closed during the day. Private sector and government offices reduce their working hours to 9am to 2pm, so getting anything done becomes a major hassle.

“Come back later” and “come back tomorrow” become familiar refrains as many employees cash in their sick days to sleep off the food coma they’ve induced by eating all night. All this leads to an overall drop in productivity and means nothing much gets done during the month of Ramadan.

But the real reason I’m a little scared of the holiday: if you’re not careful, Ramadan can actually kill you.

Abstaining from food and water during the day causes dehydration and a decrease in the rate of metabolism, both of which lead to lethargy, migraines, decreased mental acuity, and irritability. When people who suffer from these effects get behind the wheel of a car during Ramadan, people can die.

In Jordan, for example, the Civil Defense Department (CDD) had to deal with 9,098 traffic accidents, 6,844 injured, and 130 deaths during last year’s Ramadan alone. Preparing for the expected big jump in the normal number of accidents and fatalities, they strongly advised the public to stay off the roads from 3pm until iftar because these are the most dangerous hours of the day (irritability at its highest, blood sugar at its lowest).

Traffic pile-ups have also effectively doubled since the holiday started.

Jordan is not an isolated case. In a Khaleej Times article, police in Sharjah, UAE, reported that the number of traffic accidents averaged 60-80 a day before Ramadan and 300-350 a day since it began. Traffic pile-ups have also effectively doubled since the holiday started. The majority of such accidents occur in the hours leading up to iftar (3pm to dusk), further corroborating the CDD report from Jordan.

What’s even scarier than these statistics is that some Muslims with medical complications such as high blood pressure, diabetes, and heart conditions stop taking their medication, but continue driving, because they believe that taking their medicine invalidates their fast.

The over-consumption, the price gouging, and the blatant consumerism of Ramadan don’t really bother me – I’m used to all that because I grew up with Christmas. The situation on the roads, on the other hand, is enough to make anyone start praying for salvation.