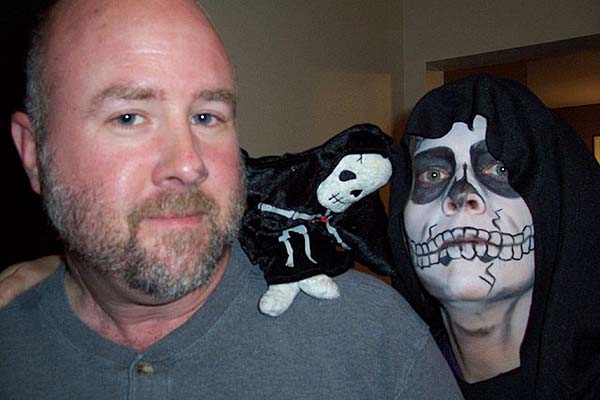 This month’s Blast From the Past talks about what many don’t want to talk about.

SHORTLY AFTER MY split with my wife last year, I found myself on a plane headed for Halifax, Nova Scotia. I remember, as it was in its descent, my feeling of not caring if the plane crashed. It wasn’t that I wanted to die, I just didn’t really care. That’s probably understandable given the situation, but my view on death changed at that point and I still feel the same way. I am not as afraid of death as I used to be. I am, however, quite fearful of the suffering that might accompany it.

In August 2008, we published A Traveler’s Guide to the History of Death. The author, J. Raimund Pfarrkirchner, wrote:

Many Westerners consider death a taboo subject and [it’s] considered a social faux pas when broached in conversation, especially when it refers to someone who has recently died. The irony is that everyone currently alive…will eventually die despite the fact that so few people seem to actually consider his or her own mortality.

He follows the ages and differing cultures in their attitudes toward death and states that for those of us in the West, death — especially in the Middle Ages and prior — was merely a “fact of life” when it was much more common and in the open. While we still consider death a taboo subject, there are also other cultures around the world in which it is not spoken of. He specifically mentions Australian aboriginals who, upon someone’s death, remove any pictures of that person from public display or cover their faces, “erasing their image as if they never existed.”

Anywhere where I drop the body, that’s the perfect place to die. We each die at our appointed time. ~ Ram Dass

The bulk of the death discussion that occurs in our culture happens mainly in the news and Hollywood movies. It’s sensationalized to make for good copy or good plotlines. There are tragic deaths like Hendri Coetzee — an adventurist killed by a crocodile — and this young woman who died earlier this month snowboarding at Retallack, BC.

There was the recent Arizona mass shooting in which six people were killed, and this completely senseless one where a teenager died while trading punches with a friend as a game. We hear heartbreaking tales of good people losing their fight with a disease and unlucky travelers who venture into the wrong part of town at the wrong time and pay with their lives.

If you can face death; if you can look death in the eye, then he will reward you, by letting you live, really live, every second that you have left. ~ Tom Robbins

But death occurs every single day. We’re surrounded by it. As this National Geographic video states, two people around the world die every second. There couldn’t be a more natural part of life than death, yet we run and hide from the subject as if it’s going to make it go away. It’s the equivalent of sticking our fingers in our ears, closing our eyes tightly, and yelling, “la la la la la” at the top of our lungs.

I’ve started reading The Upanishads, a set of ancient texts of wisdom from India, some 4000 years old. In the translation by Eknath Easwaran, in the introduction to the Katha Upanishad titled “Death as Teacher”, he says this:

Birth is but the beginning of a trajectory to death; for all their love, parents cannot halt it and in a sense have “given us to death” merely by giving us birth.

Simply by being born, we are on a path straight to death. Nothing we do can alter that (or can it?). In the quote above by Tom Robbins, he puts forth that when we are able to accept death, we will be rewarded with life. In other words, when we can come to grips with it and get over the fear, we are liberated to live the life that we deeply want to.

But it really is no wonder that the fear is deep-seated given the horrible circumstances surrounding death that is constantly presented to us in media and entertainment. The path to acceptance isn’t an easy one to traverse, but one well worth being on.

Check out the role that fungus has in death in this Photo Essay: The Fascinating Kingdom of Mushrooms.