The years I’ve spent traveling and living abroad have made a radical impact on my world-view and shaped me into who I am today: someone who strives to make the world a better place.

I don’t hesitate to say that this is a common occurrence, and if you’re reading Brave New Traveler, you already subscribe to the belief that travel results in a deeper understanding of our global situation.

The global tourism boom has contributed dramatically to global warming.

But aside from the intangible awareness and enlightenment brought about by traveling, there’s now a new reality to contend with: the global tourism boom has contributed dramatically to global warming.

Earlier this year, the Intergovernmental Panel on Climate Change reported that aviation currently makes up 3 percent of global carbon emissions, but the rate is increasing.

Then there’s the nitrous oxide emitted by planes, which is twice as bad as carbon dioxide for global warming, and the vapor trails, whose contribution to climate change is still unknown.

The response to this report in Europe was dramatic: protesters converged upon Heathrow and other airports to demand that airlines take action on climate change.

I consider myself in the upper percentile of Americans when it comes to concern over global warming. I strive to minimize my carbon footprint as much as one can while living in a major city.

Conservation International rates me an “Eco Warrior” scoring 81 out of 100 points (the average score being 44); though Earthday.net still points out that if everyone lived like me, we’d need 2.4 planets in order to survive.

The connection between global warming and flying didn’t truly hit me until this summer when I had the opportunity to travel. As I made my plans (last minute, as always), one question loomed in my mind: could I do this trip without flying?

Could I keep my carbon emissions low?

Now looking back on the summer of travel, the answer is sadly, but conclusively: No.

The fact that flying will result in a ton of CO2 emitted into the atmosphere, instead of a quarter that much by taking buses, won’t sink in for two more months when I analyze the environmental impact of my trip.

At the moment, I’m getting homesick, and once again opt to fly. 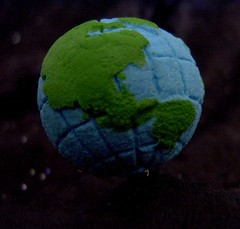 The developed world has dug ourselves into a global warming hole: we’ve spoiled ourselves with ridiculously cheap air tickets and expect to travel inhuman distances almost instantaneously.

Furthermore, the US has somehow managed to squander its transportation infrastructure,
limiting options to flying, driving, and two monopolies: Amtrak and Greyhound.

Being a semi-urban hippy, the Nature Conservancy calculates that I emit just over the world average of eleven tons of CO2 a year. My summer vacation of flying, however, boosted that number to seventeen.

All this is well under the average for Americans (53 tons), but it’s more than enough to be part of the problem. And that’s the more positive of assessments.

Getting Serious About Climate Change

The developed world has dug ourselves into a global warming hole.

I hate using hyperbole: I think it’s unprofessional and turns people off instead of getting them to listen. But, when the IPCC is desperate enough to say that the effects of global warming are “irreversible” and “like a science fiction movie,” I know they’re at wits end – and these are the top scientists in the world.

At the same time, U.S. politicians are slowly beginning to wonder if maybe this global climate change thing is actually for real.

Looking into the impact of my travel has resulted in a lot of navel-gazing: I’m a selfish, piggish American who puts being pampered (ie. flying great distances for very little money) over the plight of the world. I’m everything I strive not to be.

But now I want to look on the bright side. We now know, Brave New Travelers, traveling has an undeniable adverse affect on global warming.

What can we do? Your thoughts are important. Let’s start a discussion below!

Chris LaRoche is almost a teacher, sort of a writer, and humbly an activist. He has written social justice articles for Real Change News and yuppie restaurant reviews. His summer in Cuba can be read at seattlecuba.blogspot.com. He lives in Seattle but will always call Montana home.
Tagged
Travel
What did you think of this story?
Meh
Good
Awesome

These destinations are open to US tourists this winter
How to plan for 2021 travel in the age of COVID, according to 23 travel agents
Everything Americans need to know about traveling to Mexico right now
13 airports where you can get tested for COVID-19 in the US
7 countries you can’t enter if you have a DUI