I AM ON the male side of the male/female divide at the Wailing Wall when I see my friend Miriam waving to me. “A woman has just put on a tallit (prayer shawl), and another woman is screaming at her.” The Women of The Wall have arrived. Sometimes they get screamed at by other women, sometimes by Orthodox Jewish men. Sometimes the men do more than just scream. Conflict in Jerusalem is not just between Jews and Arabs.

I normally edge away from public prayer, but today I find myself right here, where it’s happening, where the two policemen are protecting the women from harm.

I woke up at five in the morning and launched myself into the crisp Jerusalem air to witness the monthly attempt by religious Jewish women (they appear the beginning of every month) to achieve prayer equality at Judaism’s holiest site: they wear skull caps and prayer shawls, they pray official style in a minyan (a quorum of ten), and they read from the Torah, all things that the ultra-Orthodox Jewish men who govern spiritual behavior at the Wall try to deny them.

Watching them grouped against the back wall opposite the Wall in prayer shawls and knitted skull caps, praying in full voice, I try to figure out why I am so moved, as I myself don’t pray. I normally edge away from public prayer, but today I find myself right here, where it’s happening, where the two policemen are protecting the women from harm.

“I once had a bench thrown at me,” says Betsy Kallus, an immigrant to Israel from Boston. The women are a healthy mix of young and old. They interact with a bold radiance enhanced perhaps by the cocktail of faith, institutional afflictions, and harassment. An older woman, her hair all white, has not stopped smiling her 500-Watt smile since she arrived. 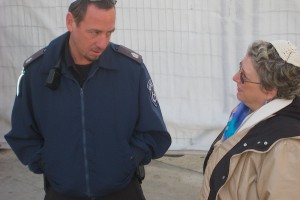 There are no righteous forays of irate men today. I watch two women — young, appalled, gesturing with horror — in amazement, beneath kerchiefs wound so tight around their heads I could almost feel an angry red line beginning to cross my own. I discover I enjoy being close to “heretics” and the dangers of heresy. I have always written about resisters, most recently the Occupy Wall Street variety, so being here is like being in a kind of familiar excitable cradle.

After prayers, I find myself speaking to Bonnie, one of the group’s founders who, that morning, attempted to bring the Torah scrolls to the Wall. “A guard tried to grab them away from me. I told him I would put them under my coat. Then, he tried to pull my tallit off me. ‘If you touch me,’ I told him, ‘I will scream.'”

I want to touch her. I want to give her a hug of secular solidarity. But I am afraid she will scream.

Holy Week in the Holy Land

Attending a Bris in Jerusalem