View all travel news
Top Countries
Top CitiesView All Destinations
Trending Regions
Trending Cities
Load More
Turns out there’s a number of people who will, courtesy of sites like Couchsurfing.com

One sunny spring afternoon in Dublin, a female friend and I stood waiting next to the massive “spike” on O’Connell Street.

The air of anticipation suggested that she was waiting for a blind date, with me there for moral support in case she changed her mind and decided to leave.

With several people milling about, it didn’t seem like the best place to locate a stranger for the first time. Yet, in the midst of the hubbub, a long-haired, sunglasses-clad man emerged and approached us.

Handshakes were exchanged, and my friend went off, duffel bag in hand, to spend the weekend with him.

This shady-seeming encounter represents just one of hundreds of meet-ups being played out around the world each day, arranged via “couch-sharing” websites such as Couchsurfing and Hospitality Club.

The premise of these sites, which began in 2002 and 2003, respectively, is to connect travelers with hosts who volunteer to act as free tour guides or even accommodation providers, offering up lodging in their own homes.

The Kindness of Strangers

By its very nature, staying with a stranger from the Internet seems fraught with risks for guest and host alike.

I felt a bit nervous as my friend walked away with the lanky, long-haired Irishman. She, too, must have had slight misgivings: after all, she hadn’t told her family that she’d be sleeping in a stranger’s living room for two nights.

Yet, when Monday arrived, my friend had lived to tell the tale – and, as her pictures of new friends and music jam sessions revealed, she had a great time in the process. She’s since “couchsurfed” with two other people.

By its very nature, staying with a stranger from the Internet seems fraught with risks for guest and host alike. Sure, the allure of a free place to crash is appealing, but then again, the peace of mind afforded by a youth hostel could be worth its weight in gold.

Therefore the allure of “couch-sharing” sites must be about more than purely financial concerns. In fact, the sites’ mission statements underline this basic premise.

Couchsurfing.com states that it “is not about the furniture, not just about finding free accommodations around the world; it’s about making connections worldwide.”

Monetary considerations are just one element of Hospitality Club’s assertion that it offers a “fun, ecological, economical and socially beneficial way of traveling.”

Both of these sites do take measures to encourage safety, including the possibility of “vouching” for people and encouraging public feedback after a meet-up occurs.

The Couchsurfing website statistics mention that in a given week, there were 12,962 real-life introductions, of which 81% were reported as “positive,” and less than 1% as “negative” (the other rating option was “neutral”).

While it’s unlikely that every encounter is without trouble, successful exchanges seem to be the rule rather than the exception. 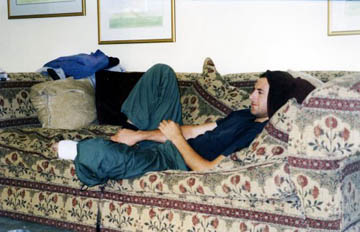 Hosts aren’t obliged to offer lodging (some may just be available to meet up for a drink). Jana’s host in Alicante took her out to “an original Spanish outdoor party I would have never found myself,” and her Portuguese host “showed us very nice local places in Funchal and drove us in his car over the whole island.”

Similarly, Jessica’s hostess in Bucharest shared her local knowledge of the capital, driving her around to cover the most sights in the limited time available.

Motivations for Couchsurfers are often based around wanting to experience a place from the point of view of a local; to avoid the traps and well-trodden paths forged by guidebook-worshipping backpackers.

Couchsurfing, in a way, enables a person to gain a different experience; to become a traveler rather than a tourist.

This sentiment is echoed by Mehdi, another surfer who says: “Traveling in CS way will involve you in people’s culture, so it’s more than seeing different places…All these things can help us to make a wonderful paradise out of this damn multimedia robotic world!”

The World On Your Doorstep

Couchsurfing, in a way, enables a person to gain a different experience; to become a traveler rather than a tourist.

Motivations for hosts are often less clear, although a tendency towards altruism tends to prevail. Some people enjoy the feeling of being an “expert” and in sharing special places with others.

Another commonality among hosts is a desire for inter-cultural exchange, with the added benefit of being able to meet people from other countries without having to go anywhere.

As a host, George explains, “I love how the culture comes to me when I am not able to travel myself.”

The possibility of making new friends from around the world (who might be able to return the favor of hosting one day) is another major draw for the people upon whose generosity the couch-sharing sites must rely.

The Internet has enabled people from around the world to communicate with each other, and hospitality sites take this to the next level by facilitating real-life cultural exchange and sharing. While there are bound to be a minority of unscrupulous people who abuse the system, overall, the success of these sites tend to speak for the power of trust and good will.

The couch-sharing trend seems to provide an alternative travel paradigm that many people find fulfilling and return to support in the future.

Have you ever couch surfed, or hosted a Couchsurfer? Share your experiences in the comments!