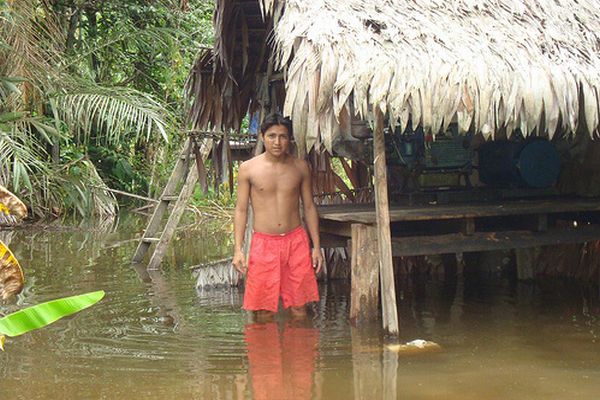 Feature Photo: m o d e / Photo above: AmazonCARES
Global warming and climate change have certainly become buzz words within the past five years.  For many of us, it’s something that will affect us in the future; the most we’ll notice is a change in the weather.

The inhabitants of the smaller islands in the Pacific Ocean notice the effects of climate change and rising sea level everyday, and each day that passes these people get closer and closer to becoming “environmental refugees.”

The Cartaret Islands rise five feet above sea level, and due to flooding and high tides, are practically uninhabitable. The people of the Cartaret Islands have tried to save their land by creating sea walls and planting mangrove trees, but it is estimated that the islands will be totally submerged by 2015.

In 2007, the government of Papua New Guinea officially designated money to relocate the families living on the island, making them the first island residents in the world to be relocated by the government due to rising sea levels.

Global warming has been a concern for Tuvaluans since the 1990s. The government even runs workshops to educate the residents about the impacts of climate change and how it continues to affect them.

Tuvalu’s highest point is 15 feet, much higher than some of the other islands, but most of the island is just over three feet above sea level. As with the Cartaret Islands, high tides are causing severe erosion and widespread flooding.

According to assistant secretary for Foreign Affairs Paani Laupepa,

“Even if we are not completely flooded, in 50 to 70 years we face increasingly strong storms and cyclones, changing weather patterns, damage to our coral reefs from higher ocean temperatures, and flooding of all our gardens.”

At just four feet above sea level, the President of the Maldives, Mohamed Nasheed, has already pledged to use tourism revenue to buy land in India, Sri Lanka, and Australia for Maldivians to relocate to once their island is gone.

Over the next 90 years, the sea level is expected to rise two feet, and with the highest point in the capital city, Male, just three feet, the 70,000 people who currently live there might want to consider relocating for their future children’s sakes.

Not just the islands of the Pacific are feeling the effects of global warming and rising sea level. The coastlines of Chesapeake Bay in Delaware and parts of Florida are diminishing each year, but one of the major areas of concern is Bangladesh.

Bangladesh is situated on a large delta, created by hundreds of tributaries of the Ganges and Brahmaputra Rivers. 90% of the land is on the flood plain, and 15-20% of the population lives on land that is just three feet above sea level.

Every year, storms and extreme flooding cause the communities in this area to be evacuated, and some permanently relocated.