WE ALL HAVE AN UNCLE OR A PARENT OR A GRANDPARENT who is absolutely convinced that climate change is lie that liberals and, you know, climate scientists are making up to scare people into supporting a left-wing agenda. This point of view is not really valid, but it is still held by an absurdly large portion of the American population. So how do you combat this attitude, or at least put up a fight when you’re sitting at family dinners and listening to endless conspiracy theories? Using logic against the illogical is a pretty useless endeavor — you’re just going to exhaust yourself.

So why not try photographic evidence? There’s plenty of it: the worst effects of climate change are likely yet to come, but here and now. 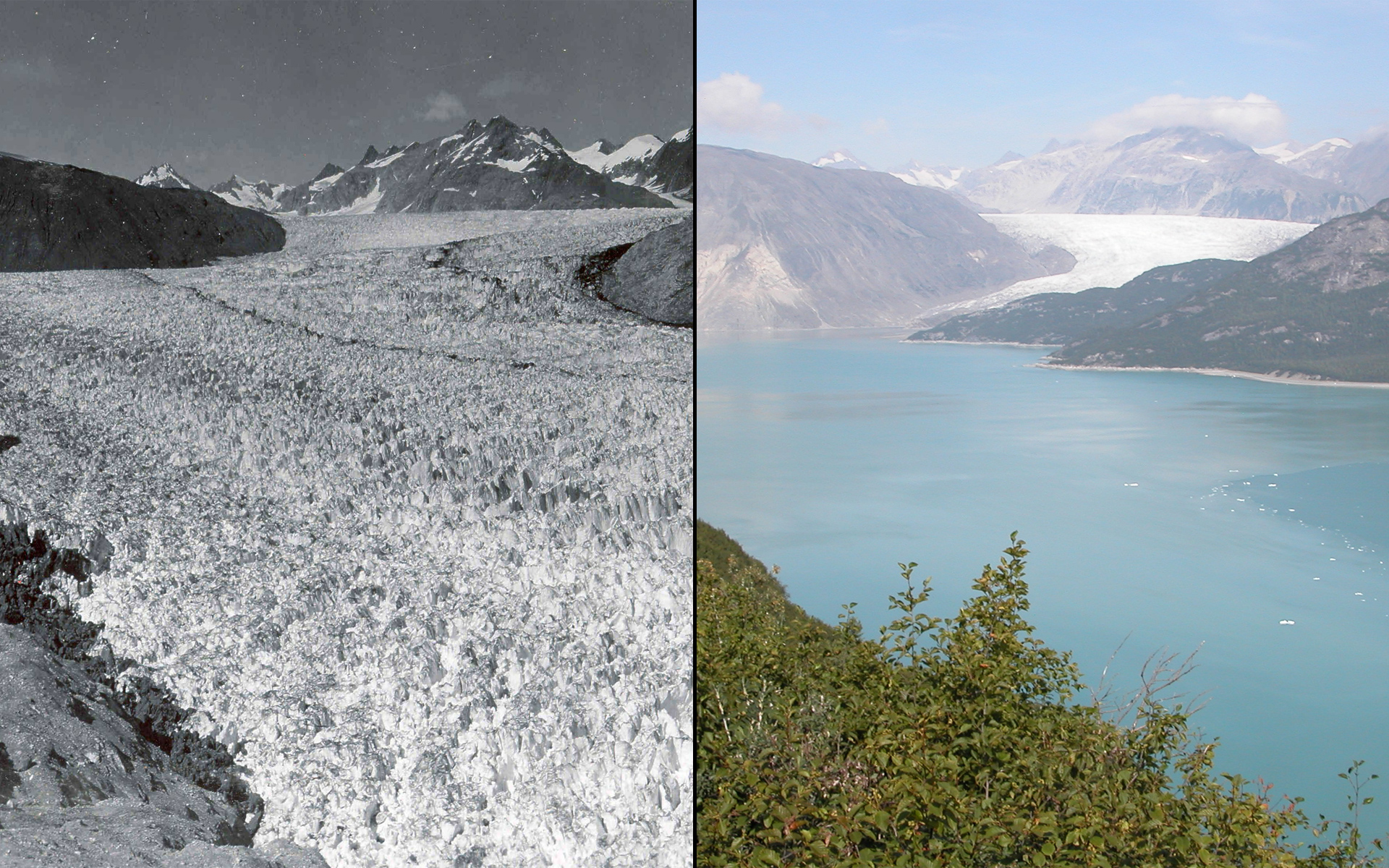 These pictures are of the same glacier: Muir Glacier in Alaska. The first was taken August 13, 1941, while the second was taken August 31, 2004. Over the course of those 63 years, the glacier retreated a full seven miles, while thinning about 2625 feet. And it’s not just at Muir Glacier: it’s everywhere. Check out this line-up by Business Insider for more pictures.

Photo by Timothy Fadek @timothyfadek for @everydayclimatechange Typical orange smog in Chongqing, China 10 reasons to be hopeful that we will overcome climate change For the last few months, carbon dioxide concentrations in the atmosphere have been at record levels unseen in over 800,000 years. Future generations will no doubt wonder at our response, given the scale of the threat. It’s known that death, poverty and suffering await millions, and yet governments still vacillate. But solutions are available. Here are ten reasons to be hopeful that humans will rise to the challenge of climate change. 1) Barack Obama has made it one of his defining issues 2) China has ordered coal power plants to close 3) The cost of solar has fallen by two thirds 4) People are taking their money out of fossil fuels 5) Bangladeshi women are being retrained as solar technicians 6) Renewable energy will soon take the lion’s share of new power 7) European homes are using 15% less energy than they were in 2000 8) Cutting emissions has become a business imperative 9) Oil is becoming much more expensive to find 10) Electric car sales are doubling each year #chongqing #climatechange #climatechangeisreal #environment #pollution #toxic #environmental #globalwarming #greenhousegases #china #asia #reportage #hope Check out our friends @jameswhitlowdelano @everydayafrica @everydaylatinamerica @everydayusa @everydaymiddleeast @everydayiran @everydayeverywhere @reduxpictures @reduxreps

A photo posted by Everyday Climate Change (@everydayclimatechange) on Jun 25, 2015 at 5:32am PDT

It is fairly easy to believe that carbon emissions aren’t harming anyone if you don’t live in a crowded, smoggy city. It’s impossible to believe that in many Chinese cities, including Chongqing. While the United States is no angel when it comes to carbon emissions, the worst polluter is China. The good news is that a recent climate deal between the U.S. and China may make a huge difference — the bad news is that Chinese and American cities can still conceivably look like this. On a side note, follow the Instagram account Everyday Climate Change to get regular updates of pictures of climate change from around the world.

Part of the reason Hurricane (or “Superstorm”) Sandy was so devastating was because of it’s extreme violence. While storms like this have happened in the past (and would happen in the future no matter what), they are likely going to happen more frequently as a result of climate change, and climate researchers believe that at the very least, climate change intensified the effects of Sandy.

4. A year in the life of Carbon Dioxide

Okay, so this is a video and not a picture, but it is truly incredible: What it shows is the carbon dioxide and monoxide emissions over the course of a year. The video, made by NASA’s Goddard Space Flight Center, shows how the emissions get particularly bad over the winter months, as there is less vegetation to absorb the carbon dioxide we’re emitting into the atmosphere, and how the gasses do not stay in one place, but are moved around by global weather patterns. It also shows the negative consequences of forest fires, which release carbon monoxide into the atmosphere. It’s a great reminder that lowering emissions is only one (pretty huge) part of the solution: we need more plants and trees, too.

Yes — that’s an overcrowded morgue and those are all bodies. A recent heat wave in Karachi, where temperatures have reached 111 degrees, has killed over 1,150 people, making it one of the top ten deadliest ever. The fifth deadliest was earlier this year in India, where over 2000 people died. These events, much like Hurricane Sandy, can not be directly or exclusively attributed to climate change, but similar heat waves are much more likely to occur in the midst of climate change.