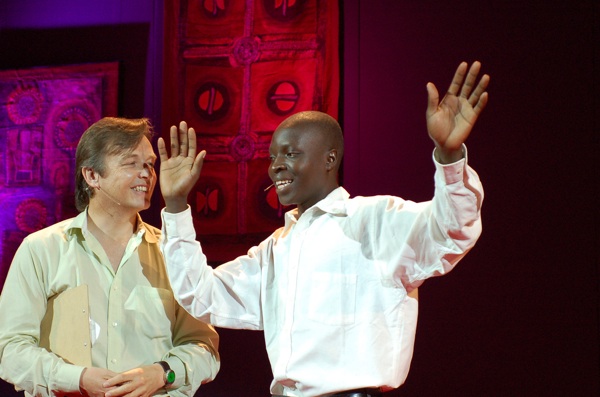 William Kamkwamba, one of the TED presenters. Photo: whiteafrican

Here are six of our favorite TED Talks about the environment:

“You know the problem [is that] we don’t want to believe what we know,” Arthus-Bertrand says at the beginning of this 15 minute talk, in which he presents large-format photos he’s shot that show exactly how we’re damaging the planet. The statistics he superimposes on the photos of Kilimanjaro, the North Pole, and the New Caledonia coral reef are given weight by the fact that those images illustrate numbers that remain abstract unless we see the damage with our own eyes.

I first saw Arthus-Bertrand’s photos in Puerto Rico a couple years ago and recall thinking, “This is important. It’s only by presenting familiar information in a new way that we’ll take action.”

Though Arthus-Bertrand’s photos might leave you feeling desperate, the other part of his talk provides reason for hope. He presents his other projects, an Internet-based multi-media documentary called “6 Billion Others,” and a film, “Home,” both of which aim to collect and disseminate people’s stories about their own lives.

These two projects complement his large-format photos of destruction in an important way: they put a human face on the problems we’ve caused and show just how much is at stake. “It’s too late to be pessimistic,” Arthus-Bertrand concludes. “We can all be part of the solution.”

By showing us the problems, Arthus-Bertrand helps point us toward solutions.

I learned about James Balog’s work in the NOVA special, “Extreme Ice.” Balog, a photographer like Arthus-Bertrand, is also director of the Extreme Ice Survey, and it’s through this research project that Balog documents the rapid recession of glaciers in time-lapse photography. “Ice,” Balog says, “is the canary in the global coal mine.”

Photos and film of receding ice can help reshape our understanding of why glacial melt is important.

You can argue all you want about climate change, but once you see Balog’s work, you’ve got to concede that the planet is heating up… and that the consequences are likely to be devastating.

Do you really know where your oil comes from? Burtynsky shows you where it comes from–and where it goes–in this super-short but profoundly powerful talk. To me, Burtynsky’s photos of the landscapes of oil–the places where oil comes from and the places where oil-powered and oil-based objects end up– are evocative of Chris Jordan’s photographs of mass consumption, and they have the same effect: that of making us more conscious about our consumption.

The fact that John Francis even gave a TED Talk is fairly remarkable: the man spent 17 years in silence. That’s just one of the unconventional commitments he made in his personal campaign to improve environmental awareness.

That campaign began in 1971, when Francis watched two oil tankers collide in the San Francisco Bay, spilling 1/2 million gallons of oil. He immediately decided to stop driving, choosing to walk everywhere instead.

It’s an unusual journey, he acknowledges in this TED Talk, but one that can serve as a means of reflection for all of us on our own journeys.

If you think environmentalism is for boring people, then bump Francis’s talk to the top of this list.

5. Nalini Nadkarny on conserving the canopy

Nadkarny’s verbal intensity can be a bit much, especially by the end of this 16 minute talk, but it matches her passion for her subject: the importance of the canopy in forests around the world.

Nadkarny believes that the life of the tops of forests can tell us a lot about the health and future of these vital areas. But she also believes that most people could care less about the forest because they have little experience with it.

Rather than simply try to convince listeners by presenting them with scientific facts, she conveys this information through creative approaches, including distribution of TreeTop Barbies and scientist-artist collaborations she refers to as canopy confluences. These have resulted in dances, art installations, and urban youth rap.

I’m a big fan of making academic information accessible and engaging, so Nadkarny’s talk was inspiring.

You’ve got to sit through seven minutes of no-nonsense, fast-talking fact-dropping before you get to that, but the wait is worth it.

6. William Kamkwamba on harnessing the wind

I just love the absolute honesty and transparency of Kamkwamba as he talks about what it was like for him to be invited to give his first TED Talk in Tanzania. Kamkwamba, of Malawi, said: “Before that time, I had never been away from my home. I had never used a computer. I had never seen an internet. My English lost,” he says. “I wanted to vomit. I’d never been surrounded by so many azungu (white people).”

One of seven children, Kamkwamba was forced to drop out of school in the midst of a famine. Looking at his father and seeing the dry fields was “a future I couldn’t accept,” he said. So he changed it.

He taught himself English by looking at graphs and diagrams in physics books he borrowed from a library. And then he built a windmill, which generated both electric and water power. “People started queuing up at my house,” he explained, “to charge their mobile phone. I could not get rid of them. And the reporters came too, and the bloggers, which led to something called TED.”

And why did he agree to give a TED talk?

“Because maybe one day, you’ll watch this on the Internet” and will be inspired to “not give up on your dreams.”

For some home-grown Matador inspiration, check out Ian MacKenzie’s Interview with Casey Kochmer on Taoist Travel.