First night at the farm

Some time very late I was startled by a rustling, no, more like a crunching sound, coming from the woods behind my tent. I sat up and reached for the knife Don had given me the previous morning. “If something decides to poke its nose into your tent, you want to be able to poke back,” he’d said.

The thing kept coming closer, so close I heard it brushing up against my tent. I could smell it then, a pungent, musky odor. Scared out of my wits, I slapped the side of the tent and let out a smallish scream (I didn’t want to wake anyone up), and heard it run away.

I woke up at first light to the crowing of the neighbors’ rooster and peaked out of the tent cautiously, half expecting to be greeted by a bear or a mountain lion.

Then I saw them – three deer, three little Bambis with their spots still on, munching away at the flora behind my tent. They raised their heads when I came out, stared for a moment with expressions of sheer panic, and then bolted.

Greatly relieved (and only mildly humiliated), I got dressed and prepared for a day of work on the farm.

Farmer and philosopher Wendell Berry once quipped, “Our model citizen is a sophisticate who before puberty understands how to produce a baby, but who at the age of thirty will not know how to produce a potato.”

One of my goals as a WWOOF (World Wide Opportunities on Organic Farms) volunteer, was to make sure that the second half of this statement would not apply to me.

Wwoof-ing, as it is known by WWOOF volunteers (or wwoof-ers), is a great way to take a relatively inexpensive trip that’s also an incredible learning experience. A WWOOF working vacation can range in length from a week or less to an entire season or more.

Through the WWOOF website, potential volunteers purchase a list of farms in the country in which they want to wwoof. 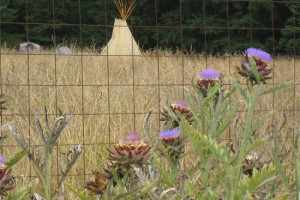 I first met Don and Elin of Elkdream Farm at a diner in Eugene, Oregon. Over eggs, we talked about the sorry state of eating in America, the possibilities of permaculture, food production in a post-oil world, and the challenge of shifting from urban living to homesteading.

The couple had lived in San Francisco for many years until a dock fire cut off shipments of food into the Bay. Within two days, grocery store shelves were empty. 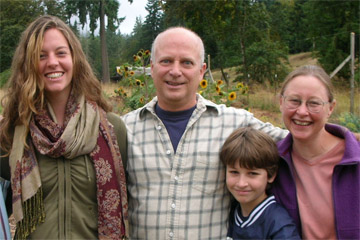 The author with Don, Elin, and Kory of Elkdream farm.

That experience, and the grim reality that oil shortages would produce similar shortages in the future, convinced Don and Elin that it was time to find a place where they could grow most of their own food. They have been in southern Oregon for 17 years now.

I chose Don and Elin’s farm because it was small and diverse. I was attracted to the homesteading element of their operation; they describe themselves as being almost fruit- and vegetable- self sufficient, growing all year round in what Elin describes as less a farm and more “a large garden”, rotating crops to take advantage of different parts of the growing season and increase soil fertility.

I spent my first afternoon on the farm harvesting potatoes (Take that, Wendell!), digging through straw and dirt for the golden spuds that lay there like Easter eggs, unconnected to anything. The potato plants had flowered and died weeks before, leaving only the mature tubers just below the ground.

We worked with simple tools – a shovel, a wheelbarrow, a spade – reveling in a quiet interrupted intermittently by logging trucks traveling back and forth from a clear cut up the road. Elin would shake her head in disgust each time a truck drove by.

During my time at Elkdream, I became accustomed to the quiet rhythm of life on a farm. Early mornings harvesting and mulching and planting; long, lazy afternoons reading and resting, avoiding the intense heat of the late-summer sun; hearty dinners Elin and I cooked together with fresh fruit pies for dessert. In the evenings, we might work again, or Don would prepare me a bath of solar-heated water in their large, outdoor bath tub.

Don and Elin took an active interest in sharing their knowledge with me. When I arrived, they presented me with a packet of reading materials. We had frequent discussions on everything from how to farm with less water to the excesses of the American lifestyle. By the time I left Elkdream, I felt a deep connection to Don and Elin and to their way of life.

And I was even sleeping soundly in my tent.

Although WWOOF is the biggest, most popular organization to offer farm work exchanges, there are many others.

Choose your farm wisely. If you don’t like animals, pick a farm that doesn’t keep them. Likewise, if you’re dying to learn how to milk a cow, don’t go for a farm that only grows vegetables.

Choose when to go. If you go early in the season (late spring – mid summer) you will probably be doing different work than if you go during the harvest (late summer). Since Don and Elin plant throughout the year, I was able to do multiple kinds of work, but this may not be the case at all farms.

A few essential items to bring: good work gloves, a sun hat, sunscreen, shoes and clothes that can get muddy.