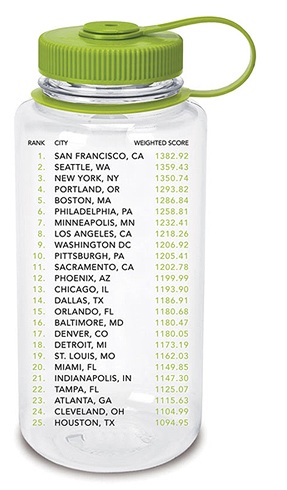 Last year, I made an argument for cities as potentially more sustainable than rural areas.

As a New Yorker who doesn’t own a car, takes public transportation, shops local, recycles, and has access to communities of other like-minded folks, like freecyclers, I have lots of first-hand reasons to be passionate about the environmental potential of cities.

Earlier this month, Nalgene published the results of its second annual Least Wasteful Cities study; the rankings are visible in the above graphic. San Francisco, Seattle, New York, Portland, Oregon, and Boston are the top five; Houston ranks dead last.

Nalgene defined waste aversion by questioning 3,750 respondents (approximately 150 participants from each of the 25 largest cities) about 23 different behaviors and habits that ranged from recycling to using public transportation.

As for the analytical nitty-gritty:

The average of all 23 questions was then used to derive the overall unweighted score for each city.

[Q]uestions were then weighted, reasoning that some actions are have a higher influence on waste or overall impact on the environment. Each question was assigned a value of 1, 5, 10 or 25 by which the unweighted score was multiplied, providing the final, weighted score:

Do you live in any of the surveyed cities, and if so, what’s your take on the results? What might explain a particularly low score? If you live in a city outside the U.S., how might it rank according to these criteria? Share your thoughts in the comments.

Why are cities sustainable? Here are my six reasons why cities are sustainable places. Let me know if you agree or disagree!