View all travel news
Top Destinations
Top CitiesView All Destinations
Trending Regions
Trending Cities
Load More
Yan Hua is seventeen years old and a junior at Balboa High School in San Francisco. She was one of six students who received the Matador Travel Scholarship and traveled to Nicaragua this summer with a non-profit organization called Global Glimpse.

I’M SEVENTEEN YEARS OLD, a first-generation immigrant from China, and a junior in high school. Last summer I applied for a travel scholarship provided by the Matador Network to a program called Global Glimpse and got accepted. Knowing that I was going to Leon, Nicaragua with 18 youths from different high schools, my feelings were full with nervousness because I don’t know any Spanish, and English is my second language, but I was excited at the same time because I get to know more friends from other cities and states.

Why did I apply for this trip? I wanted to know how other peoples’ lives are like in a different part of the world, and I also wanted to challenge myself to step out of my comfort zone and try to make a difference in a community by becoming a better leader.

Last summer, on July 27th at 4am in the morning I carried my suitcases downstairs, said goodbye to my family, and then headed straight to the SFO airport to meet up with 18 youths. 7 hours of plane ride seemed longer than usual because everyone was in their own little world in anticipation of what was going to happen.

The house they lived in was dark and the only thing they had in the house were four net beds; the food they ate was not enough; the animals they raised were skinny, but the family always had a smile on their face.

When I first arrived in Nicaragua an image appeared immediately in my mind. It felt like a dream from my past when I came from China to the United States at the age of 13. But even that experience was different because at that time, I knew a little bit of English and I went with my parents. This time I went with strangers and didn’t know any Spanish. But because of my previous experience of having to adapt to a foreign county, it helped me to adapt to arriving in Nicaragua a lot easier. I quite appreciated that.

After spending three weeks with a packed schedule in Nicaragua my point of view of the people and of the world has been changed forever.

I clearly remember the day that we could only “spend a dollar a day.” We went to a small village, separated into four groups and spent the day in four different low-income families. The family I visited was a family with a mother and father who have four sons and one daughter. The house they lived in was dark and the only thing they had in the house were four net beds; the food they ate was not enough; the animals they raised were skinny, but the family always had a smile on their face. 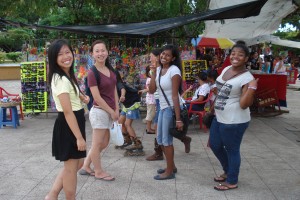 Carrying water from the well was so fun. It was really heavy and hard to carry. When you walked, the water splashed on your shirt and after you got back to the house, only half the amount of the water was left in the bucket. I still remember one of my friends put it on the top of her head to carry it. It was rainy that day but we all had fun on a rainy day. It was my first time that I really enjoyed a rainy day because it took away the heat.

August is the best month for sea turtles to lay eggs, so we decided to explore the nature during midnight on the beach to look for some sea turtle eggs. That night we also had a bonfire and shared scary stories. After sharing stories, we walked miles and miles to look for the turtles but didn’t find anything. Some of us decided to lie on the beach to take a break. 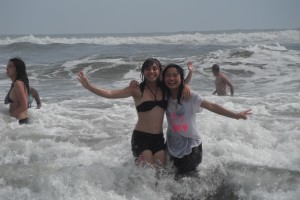 Enjoying listening and looking at the nature made me feel so relaxed. I soon found out that my life was so busy back in San Francisco; I need to slow down a little bit and enjoy it more.

We also spent two days on another beach and I learned how to surf! It was an interesting experience to have in my life. That was my first time I went surfing and I did get up at least three times. When you saw the waves coming, it was sort of scary. The water force was strong and out of control, but I like challenges. When you did it, you would feel a sense of success.

Different countries have their own languages as well as Nicaragua. I couldn’t stay in my own comfort zone anymore because my surroundings are people who speak Spanish. I have to take a step forward to try to understand them and their culture. It’s really a challenge for me to communicate with them.

Learning English as my second language and having to learn Spanish at the same time was really difficult for me to do, but I got over it. I tried my best to learn some basic phrases such as how are you? Where are you? And I knew how to count from one to twenty in Spanish. Even though it was just a few words and phrases, I did try. 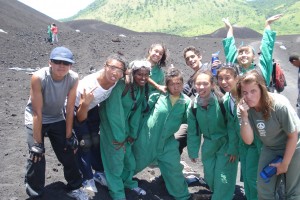 We also did a community service project at a hospital. That was one of our accomplishments that I was most proud of. We rebuilt a children’s playroom, so the children at the hospital could play in it. We separated into different groups and had our own responsibilities to complete our own duties. After the whole trip, it totally changed my perspective about the world, the surrounding and the people. People who have less are happy about their life and able to work hard to make it better. I should not take anything for granted; I shall give thanks for what I have now. When I work, I should think and do it, not just do it without thinking.

After I returned to school, I enjoy my school year more. I have better time management and I have more fun in classes. I feel my lifestyle has become more relaxed and I am passionate about making a change in my school by taking a leadership role. I won’t let this feeling go away, I will keep it by telling my stories to my teachers, my classmates, and my friends in order to inform, engage and inspire more youth to step up and make a difference in the community.

I would like to thank Global Glimpse, Coro and Matador for making this opportunity to travel to Nicaragua possible and changing my perspective on the world.