View all travel news
Top Destinations
Top CitiesView All Destinations
Trending Regions
Trending Cities
Load More
Cecilia is sixteen years old and a junior at Burton High School in San Francisco. She was one of six students who received the Matador Travel Scholarship and traveled to Nicaragua this summer with a non-profit organization called Global Glimpse.

MY NAME IS CECILIA YOUNG, and I am from San Francisco, California. Being only sixteen years of age, I feel that I still have a lot more to experience in life. That is exactly what Nicaragua gave me when I went there during the summer of my junior year in high school. A youth travel organization called Global Glimpse, as well as a youth leadership program called Coro, and the generosity of many donors gave me the chance to travel abroad to a place where I would never have expected to go. I was more than happy when I found out that I had been chosen for this amazing opportunity to go to Nicaragua.

I had never been out of the country before.

Before I left for Leon, Nicaragua, I didn’t know what to expect. I had never been out of the country before, so I was fairly nervous about leaving home for three weeks as well as not knowing over half of the people in my delegation. Also, not having any form of communication (cell phone) with me at all times was something I was not used to.

When I first arrived in Nicaragua, I thought that the humidity was almost unbearable. Right when I got out of the airport, I started sweating like I have never done before. When we finally got on the bus to our hostel three hours away, I thought that the next three weeks was going to be long and tiring.

Over the course of the next three weeks, I went to numerous places in Leon. At first, our leaders never let us go out in groups by ourselves, but as we got familiarized with the city, they gave us more freedom. One of the most memorable experiences that I had in Nicaragua was hiking up a volcano named Cerro Negro, and sand sliding down it. We wore goggles and some even wore full on sand suits. The board was heavy, but the climb up wasn’t as hard as I thought it would be.

At one point, one of our leaders, Austin, led us off track while we were going up the volcano; therefore, each one of us had to climb up a steep, rocky part of it even though it was a bit dangerous. I felt that was the best part of the climb because it got my adrenaline rushing and I love taking risks. Plus, I learned that rock climbing may not be so hard after all. 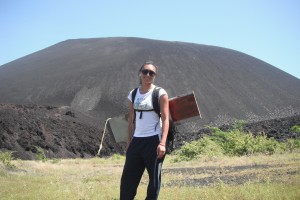 Other memorable events includes horseback riding as well as riding on a boat through mangroves to a secluded beach far away from the city of Leon. We also stayed at a beach house for one night where I was the leader of the day, meaning that I was responsible for keeping everyone on task and getting them to places on time.

I also remember looking for sea turtles in the middle of the night after we had a bonfire and made s’mores. All nineteen of us, all in high school, set out for an exploration to watch sea turtles lay eggs on a little island just a boat ride away. We walked for hours and hours along the beach, but unfortunately, we were unable to find any. Even after walking six miles until 2am, I felt that the experience was all worth it. It was warm outside and the sand felt good underneath my feet, and the stars above only added to the amazing night.

The biggest challenge I had to face was, hands down, my bug bites. By the end of the trip, I probably had over twenty-five total. They weren’t your average bites either. At first, I thought that they were spider bites because they looked like big blisters filled with water; but after having the doctor come and check them out, it was confirmed that they were flea bites. They were more than what I’d call disgusting. Because I also had an allergic reaction to the bites, my ankles swelled up and I couldn’t walk for a day. I ended up soaking my feet in cold water for hours, but the trip was well worth all the pain. I also caught a cold a couple of days later, but that was no big deal. For the last week of the trip, the bites almost didn’t even bother me. 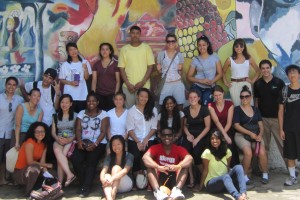 We also taught locals English every day for two out of the three weeks we were in Nicaragua. This may have been the single event that I was most proud of. My students consisted of people my age and some even older. I worked with two other people from my delegation, and I felt that our class really appreciated us. Even though it wasn’t easy, I felt that I have made an impact on each and every one of my students may it be small or large. Knowing that I will be remembered makes all the difference. I even keep in touch with some of my students via Facebook!

Going to Nicaragua really changed my perspectives on the world, including America, as well as helped me learn more about myself. I found out that I really love adventure, and I love to explore new things and meet new people. I really appreciate new challenges put ahead of me as well as learning about a new culture. I feel that every culture is special in their own way and that more people should be given the opportunity to travel outside of their own country. You won’t know about the lives of another until you have actually stepped into their shoes and experienced their lives for yourself. Also, I learned that I really want to travel abroad in college and do what makes me happy. I want to major in international business when I grow up.

The women there were also more inspirational than I could have ever imagined; they were independent, hard-working women that had the power to persevere through any struggles in life.

I think one of the things that hit me the hardest during my trip in Nicaragua was the happiness of the people living there. Their smiles and laughter radiated even though they were poor and barely had enough to support their families. Most lived in shacks where they didn’t even have running water, yet they still had high hopes and retained a positive outlook towards the future.

The women there were also more inspirational than I could have ever imagined; they were independent, hard-working women that had the power to persevere through any struggles in life. Grandmas used machetes to cut grass and “mow” the lawn. Mothers and daughters woke up at 4 in the morning everyday just to cook and sell their products when they barely had enough to eat. Seeing this made me realize how much I take for granted in my own life. I may not be wealthy, but Nicaragua showed me you can be happy no matter what situation you’re born into.

After I got back home, I was so used to the lifestyle of living with eighteen other high schoolers in Nicaragua and waking up and eating breakfast with them every morning, that I didn’t want to be back in San Francisco. I had school the very next day, which made me miss Nicaragua even more. I missed the food there, especially the plantains, as well as all my students and leaders, including Jocelin. I think we had the best coordinators ever because they were all understanding and helpful in every way. One of the coordinators, Nicole, helped me throughout all of my bug bites and swollen ankle injuries. I owe her a lot. I still keep in touch with some people in my delegation, and I would relive those three weeks all over again if I could.

I recommend traveling to EVERY student because it opens up doors for more learning experiences as well as challenges you may never face ever again. You can learn new things, not only about yourself, but about others as well. Being exposed to a new culture and language is one of the most amazing things that can happen to a person. Even though you are placed in an environment where you aren’t used to anything, I feel that traveling is all worth it.

Thank you so much to Global Glimpse, Coro, and the Matador Travel Scholarship for making this opportunity possible. Without you all, I would not have had this life-changing experience!