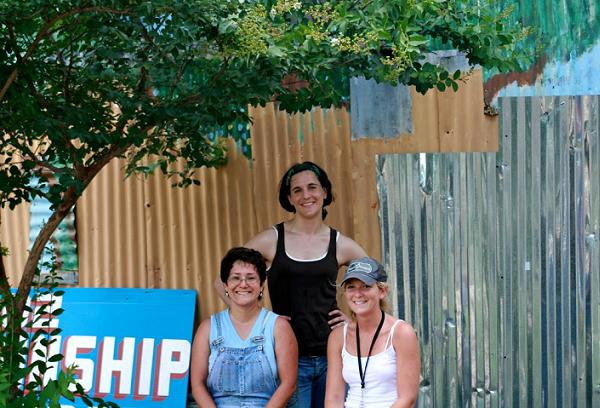 Kate Metzler wears a gold shark tooth on a chain around her neck.

In a way, it seems like a relic from an East Coast, 1980s childhood, but for Kate it’s also a reminder of the mission she’s focused on every day: saving sharks. And shark fins, specifically.

Metzler is a socially and environmentally conscious chef trying to raise awareness about shark fin soup. Fascinated with sharks during her childhood, much of which was spent on Cape Cod, her interest in one of the ocean’s most reviled animals has only deepened over the years. She reads extensively about sharks and has swum with sharks on an environmental expedition.

But it’s her work as a chef that has made her more attuned to one of the most persistent and lethal threats sharks face: the desirability of their fins.

Though Metzler has not made shark fin soup, she has become aware of how pervasive the shark fin trade is–and how lucrative it is, too.

“Yes, shark fins are sold openly in Chinatown [in New York],” she tells me, explaining how the gelatinous fins are skinned and dried for sale. They might as well be a tidy stack of gold bars; single fins can sell for as much as $20,000.

MatadorU student Mike Collins, a former commercial fisherman, confirms that a haul of fins is not unlike pulling up a net full of cash. “When the Blue Fin Tuna started becoming scarce most of the tuna boats in Maine jumped on the ‘finning’ band wagon.” At the height of the shark fin craze, he said, fishermen were taking in $42 per pound of fin. 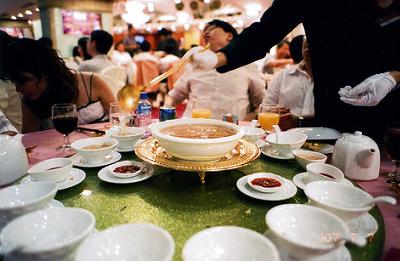 The fins are repurposed as a delicacy, and the going rate for a bowl of shark fin soup can top $100. And while you may not remember the last time you saw fin soup on a menu, an August 2009 post on the blog Animal Tourism says you don’t have to look all that hard: San Francisco has at least 69 restaurants serving shark fin, while New York City has at least 56.

Cash aside, it’s at the table, over soup, where things get dicey. The soup’s popularity dates back to the Ming Dynasty, and shark fin is purported to have medicinal benefits. It’s also supposed to kick start your sex life. Shark fin soup is a dish that represents so many things, among them, status and adherence to cultural traditions.

Matador contributor Valerie Ng has had shark fin soup “on a few occasions, always at family restaurant outings (usually for special occasion like a birthday, wedding, or anniversary).” For a long time, Valerie wasn’t aware of how fins were procured or the consequences of “finning.”

Shark fin soup is a dish that represents so many things, among them, status.

When she learned more about the process, she stopped eating the soup, though has felt awkward at gatherings where it is served. “I’ve never had to pay for it myself,” Valerie says, but that hasn’t made the moral and ethical dilemmas easier for her. “It does pain me to see leftover bowls of the soup, and sometimes I feel compelled to help myself, so as not to let them go to waste,” she explains. And yet, her parents boycott the soup and have asked organizers of family outings not to order the soup on occasion.

Metzler hasn’t tried the soup herself–she’s thinking about it, reasoning, “How can I talk about this issue if I’ve never even tasted the soup?”–but as a chef, she can explain its role as an ingredient. “It’s basically used as a thickening agent,” she says, “but the actual flavor of the soup comes from a lot of other ingredients, not the fin itself.”

Mike Collins has had shark fin soup on several occasions and describes it as having no flavor at all. “It is just cartilage,” he says, confirming what Kate suggests about the other ingredients: “It is [everything else that] goes in the soup that has the flavor.” 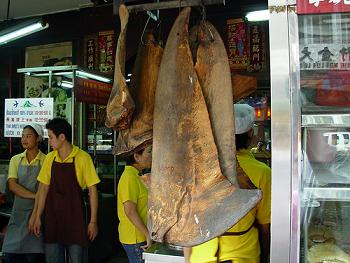 Here’s what happens when shark fins are cut with the soup bowl in mind. The shark dies. Whether by drowning (it can no longer swim) or by having its position in the food chain completely upended, the definned shark has no chance of survival.

And the fin is usually the only part that is saved. While Mike said whatever other parts were saved would be used to bait lobster traps when he was a fisherman, Kate explained why shark steaks and kabobs are not all that popular: shark meat’s high ammonia content means that unless it has a fast transition from sea to table, and is cared for with exceptional attention in the process, it poses significant health hazards to the person eating it.

Here’s what happens when shark fins are cut with the soup bowl in mind. The shark dies.

For all these reasons, Kate is on a mission to get chefs to commit to not serving shark fin. She’s turned off by groups like PETA and Sea Shepherd and her face contorts when I mention something about activism. She’s not even entirely comfortable aligning herself with the few groups that have taken on the shark fin issue because she’s uncomfortable with their preachy tone. “I don’t want to tell people that making shark fin soup or eating it is wrong,” she says. “I just want to make them aware of related issues so they can make their own informed choices.”

Have you eaten shark fin soup? Have you ever had a culinary experience that caused a conflict with your environmental values? Share your experiences in the comments.