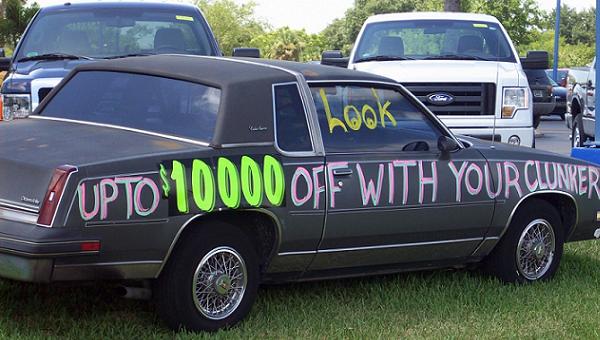 It’s a classic example of the problems that often undermine government solutions: tackling one problem and creating another.

President Obama’s Cash for Clunkers Program (officially called–har har– CARS: the Car Allowance Rebate System) was renewed this week despite the grumbling of some lawmakers who view the program as yet another loopy Democratic scheme to prop up the wheezing economy.

“…helps consumers buy or lease a more environmentally-friendly vehicle from a participating dealer when they trade in a less fuel-efficient car or truck. The program is designed to energize the economy; boost auto sales and put safer, cleaner and more fuel-efficient vehicles on the nation’s roadways.”

CARS was launched with enough money–Congress believed–to run through October; however, the rebate program has proven so popular that within six days of its launch, it was clear that more money would be needed.

Apparently, America’s got a lot of clunkers on the road.

But it’s not the only country with a Cash for Clunkers program.

In a recent article in The New York Times, reporter Carter Dougherty explained that France, Spain, and Austria have similar programs, as does Germany, where the Cash for Clunkers scheme may ultimately cause more problems than it solves.

Dougherty reports that unlike in the U.S.–where a provision was included to prevent the clunkers from being resold by unscrupulous dealers–the clunkers traded in by Germans aren’t simply being recycled… they’re entering a growing black market that sends the vehicles to Africa and Eastern Europe.

“Great!” you may say to yourself.

But hold on a second… the environmental motives behind the Cash for Clunkers programs, both in the U.S. and abroad, are to get old vehicles that are not fuel efficient and which are serious polluters off the road. Completely. The idea was not to simply put them on someone else’s road, and therein lies the problem.

By shipping the clunkers off to Africa or driving them across Europe’s western/eastern borders, some slick entrepreneurs are making a quick buck (and certainly more than they could make from recycling the car’s scrap metal– the Cash for Clunkers programs have had the unintended effect of causing a steep decline in the value of scrap metal as the market was glutted with the recyclable refuse).

But they’re also adding to environmental and health problems in other countries, exacerbating the divide between the “developed” world and the “developing” world.

Unfortunately, Dougherty’s article offers no indication of whether the German government is looking for ways to retool its Cash for Clunkers program so the problem can be controlled.

In addition to cars, the West exports its e-waste to developing countries. Read about The Problem with E-Waste here.

Finally, take a look at some of the implications of the West shoving its environmental problems on the East in East v. West: Who’s Responsible for World’s CO2?