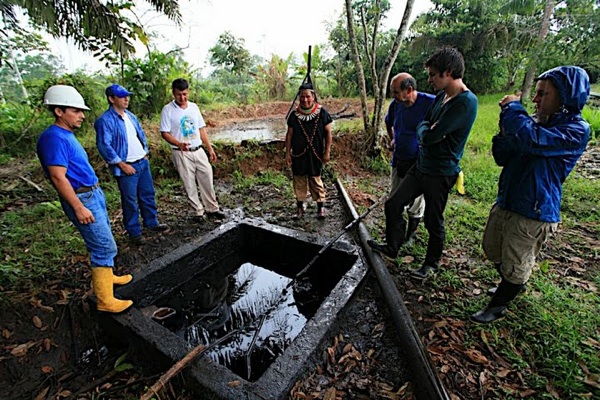 Manuel Ignacio Salinas was so proud to repeat his name when I asked him a third time.

We passed his ramshackle wooden home, which was held ten feet off the ground by white concrete stilts. In the backyard, a group of children were hanging clothes on a line and chasing a small, fluffy white dog. They smiled and waved before quickly returning to their tasks. It was obvious they knew what we were there to see.

I was visiting Señor Salinas with one other volunteer as part of a Toxic Tour of the polluted area in the Amazon jungle. As we entered his backyard, I began to smell the unbearable scent of crude oil. Lying before us was what looked like an abandoned sewage waste site—a 50 yard-long section of marshy land with weeds jutting out. 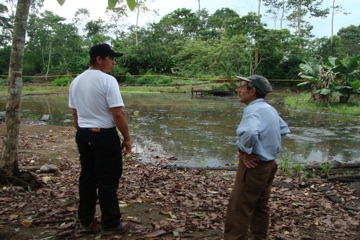 There were no rats or flies like I expected, perhaps because even these creatures could not stand to live near such a massive pool of stagnant oil. The area was encircled with yellow tape that read “peligro”—danger—but the side closest to Manuel Salinas’s home was left open. We walked to the edge of the area, and Señor Salinas began to talk to us.

“I bought this land 25 years ago, without knowing what was beneath the surface,” he said. “I started to clear away the trees and brush to grow coffee and fruit trees, because this was how I had planned to make a living. But then I discovered what I thought was a huge swamp and could only plant a few trees around it.

“We were unable to farm the land. We were unable to get clean water. We slid into poverty. But we had no choice but to continue drinking from the contaminated well. For a while, we had nothing, ni agua,” he said. Not even water.

As I listened, his adorable white dog scurried around our feet. Suddenly, it sprinted a little too far and hopped directly into the pool of contaminated oil-water. We screamed for it to come back, and when it finally pulled itself out of the sludge, its coat was completely black. Señor Salinas also called for the dog, but it was obvious he was not nearly as shocked as us. After all, he had lived near the backyard waste-sight for over 20 years and had seen many animals perish in it.

“I wanted to move, but who would buy this land?” he continued. “I just don’t want my family to be sick.”

Despite being threatened with “a lifetime of litigation” by Chevron attorneys, Señor Salinas is one of the 30,000 residents of the Ecuadorian Amazon who are plaintiffs in a $27.3 billion class-action lawsuit against Chevron, to remediate what has become known as the Amazon Chernobyl–the worst oil-related disaster on the planet. 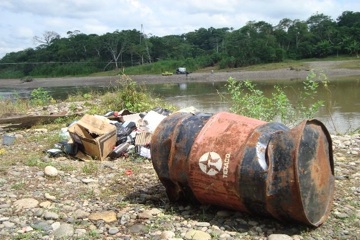 Texaco, now Chevron, admitted to dumping more than 18 billion gallons of toxic chemicals into hundreds of waste pits throughout the jungle between 1964 and 1990. As a result, oil-polluted water and soil are spread over more than 1,500 square miles in the pristine Amazon wilderness. Environmental and medical experts believe the mess left by Texaco’s negligence has caused extremely high levels of cancer, miscarriages, birth defects and other health problems in the region.

Judging by his discolored eye and skin rashes and Señor Salinas’ tales of frequent hospital visits, it was apparent that Señor Salinas himself had been affected.

“Even the President of Ecuador, Rafael Correa, came to visit,” Señor Salinas said. As he spoke, the sadness in his eyes was impossible to ignore. “The president put his hand on my shoulder and he asked, ‘What can I do?’ The truth was, at this point, not much.”

His family is forced to travel seven hours by bus to Quito, the capitol, to seek medical treatment for the illnesses caused by the polluted water that they unknowingly drank and bathed in for years. I could not imagine staying near this pool for an hour, never mind a lifetime, as Señor Salinas’s children have. After just a few minutes of standing around the waste site, my nose and whole body felt infiltrated with the gross waste, and I even began to feel light-headed. Wiping my face and blowing my nose later in the car, I was appalled to find the tissue black with what appeared to be nasty petroleum particles that must have been densely polluting the air around Señor Salinas’ home.

A few days later, I traveled to Cuyabeno National Park in the heart of Ecuador’s rainforest. As we traveled slowly down a bumpy dirt path toward the river, large, untouched forests lined one side of the road. On the other, massive oil extraction stations were visibly still in operation. We passed by huge, black tanks surrounded by a maze of black and yellow tubes, fenced-off silver machinery covered in skull and crossbones signs, old unused oil barrels thrown carelessly in all directions and several shiny oil-pits with outlandishly tall and sweltering gas flares in the background that stood higher than the hundreds of tall green trees directly next to them.

“Eventually, I think I could forget these images. But the one thing I will always remember is the face of Manuel Ignacio Salinas.”

We finally arrived at the Cuyabeno River, and I stepped into a canoe that would take us to our destination: a rainforest eco-lodge. Two hours later, we arrived at the lodge, surrounded by a lush canopy. Stepping off the boat onto the small wooden dock, I walked towards what looked like a pseudo-summer camp in the middle of the jungle – complete with fishing boats, small stilted straw huts, bunk-beds, hammocks, and a communal outdoor dining area.

The sound of birds singing intermingled with the pounding rain. I took a deep breath and savored the fresh jungle air. This was how the rainforest was supposed to be. As I plopped into a hammock beneath the canopy, my mind drifted back to all the things I had just seen: the incriminating pools of pollution, the countless rusting oil barrels, the massive oil stations, and the flaming gas burners with birds circling in their emissions.

Eventually, I think I could forget these images. But the one thing I will always remember is the face of Manuel Ignacio Salinas.

Read more about Chevron’s acts in the Amazon here.

Tourist stranded 330 feet up on broken glass suspension bridge in China
10 golden rules to abide by when visiting a nudist beach
7 vintage train rides in the US that will take you where no cars can go
The optimal road trip to see all the US national parks, mapped
17 differences between a normal mom and a Greek mom