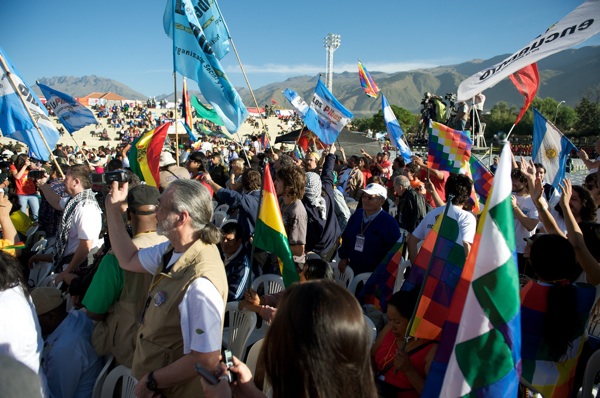 Citizens of the world gathered in Bolivia for the World People’s Conference on Climate Change. Photo: The City Project

Thousands of citizens and delegates from around the world met this week in Cochabamba, Bolivia to attend the World People’s Conference on Climate Change and the Rights of Mother Earth.

Bolivia’s president, Evo Morales, called for the summit soon after the United Nations’ Climate Summit in Copenhagen last December, when it became clear that a binding treaty with decisive action was not forthcoming.

Many believe that the major carbon polluters of the world prevented a strong agreement and that the voices of both civil society and nations of the global south were sidelined or silenced.

They determined that a process outside the United Nations framework was needed.

Billed as an ‘alternate climate conference,’ the WPCCC has brought together delegates from more than 50 world governments, including the presidents of Ecuador, Paraguay, Nicaragua, and Venezuela; government officials from Europe, Asia, and Africa; and members of indigenous communities, grassroots environmental organizations, and concerned citizens with a mission to focus on practical solutions for communities affected by climate change.

“Bolivian president Evo Morales called for the summit soon after the United Nations’ Climate Summit in Copenhagen last December, when it became clear that a binding treaty with decisive action was not forthcoming.”

According to Joshua Kahn Russell, grassroots action manager at Rainforest Action Network, the Cochabamba conference “represent[s] communities most directly affected by climate change. They will be outlining a people’s platform, looking at the practical things they can implement now. Cochabamba is going to be historic.”

Nearly 200 self-organized events were registered by different networks on every aspect of climate change policy. You can see the program here.

For the big picture, keep your eye on the following:

OneClimate has been streaming live as well as hosting an interactive exchange.

Learn more about Global Environmental Issues by visiting our focus page on the topic.

What did you think of this article?
Meh
Good
Awesome
Bookmark
Posted In
Travel
Destinations
Bolivia