“Where was the kitchen again?” I’m confused. I remember the palm-leaf building being somewhere around here, but I can’t pinpoint its location now.

“Over there,” a colleague points at a patch of sandy ground 15 metres back from the shore, covered in debris: thick logs, fragments of sago-palm walling, pieces of hewn timber, dried leaves. A mix of tsunami damage and signs of moving on, six weeks after.

To the side is a green and red dinghy that looks like someone’s taken a sledgehammer to it. There are trees around us too — some leaf-less, some green. The living trees are about the only thing I recognize from my last visit to this Solomon Islands village. Then, a group of NGO workmates and I had been barbecuing fish on hot stones at the beach; I was on my eighth visit to the island from our headquarters in the capital. The kitchen stood beside my colleague Ashley’s house, and I’d gone in there to change out of my wet swimming gear.

It’s odd to see many of the same faces here now, for a completely different purpose. The inviting call of the waves at the beach is still there — has returned — but we’re not here to relax. This time we’re not in beachwear but in high-vis vests, emblazoned with our NGO’s logo. We’re here to distribute relief supplies. 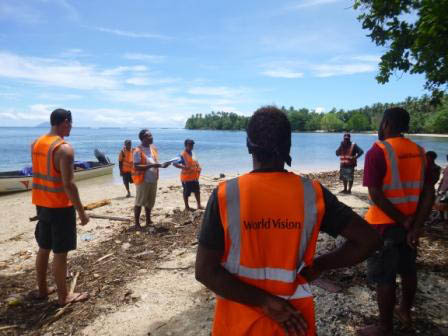 Since the tsunami struck on February 6 this year — following an 8.0 earthquake — this has been life for my colleagues on Santa Cruz Island, in the remote province of Temotu. Like me, their usual job is not emergency response but long-term community development, working with communities for up to 15 years to bring about sustained changes in health, education, and other identified areas of need.

I’m a volunteer Grants Officer; grant writing and reporting are my main tasks. Comparatively, it’s a nine-to-five. But since the tsunami struck, we’ve all been pulled into the rapid response team. This visit is the first time for me to see the faces behind the stats I’ve come to know so well: a 3.5-metre wave…10 fatalities…1,060 destroyed or damaged homes.

In my youth, I dreamed of being an aid worker. I saw myself dressed in Red Cross red or UN blue, holding kids by the hand and pulling them from war zones or other disasters. Now that I’m here, dressed in the bright orange of our aid agency, things are not looking so glamorous.

We’re sleep-deprived. It’s Sunday, another in a string of weekends at work. My last six weeks have been consumed with grant applications and donor meetings, budget coordination and expenditure tracking.

Yesterday we went out by boat to distribute items to communities accessible only by sea. In some ways the work is a lot easier than our usual longer-term programmes: You turn up, register the recipients, distribute relief, leave. There aren’t the challenges of changing entrenched attitudes and behavior that come with our usual work, where it’s not unusual to work in one area for a decade or more. At the same time, you don’t get the satisfaction that comes with that sustained change either. 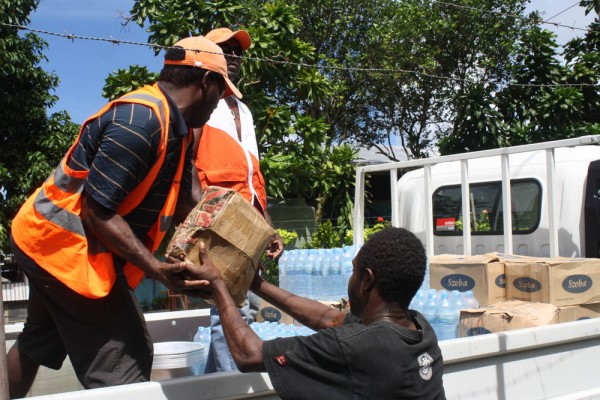 John Michael, a survivor I met in one village, showed me around his place. Unusual for a region where most houses have walls and roofs made from sago-palm leaves, John Michael’s was a two-storey concrete and timber building. And it was still standing.

“The tsunami destroyed all my power tools,” he told me in Pijin. “And my generator, too. Everything which was on the floor.” A builder, his livelihood was tied to those possessions.

John Michael took us behind his place to show us the blackened and broken remains of plants. “Saltwater burn,” a colleague explained.

But, on a closer look, I noted evenly spaced mounds amongst the debris, with new, green shoots poking out of each one. It was sweet potatoes; they’d started planting back already.

When I got out my SLR to take a photo, John Michael’s daughter Samo stood in the frame. Click. She was wearing a skirt the colour of our vests, a stained pink t-shirt, over-sized flip flops, and a toothy smile. With that look and the green shoots behind her, the shot reminded me of something another colleague of mine said about the children in the province: 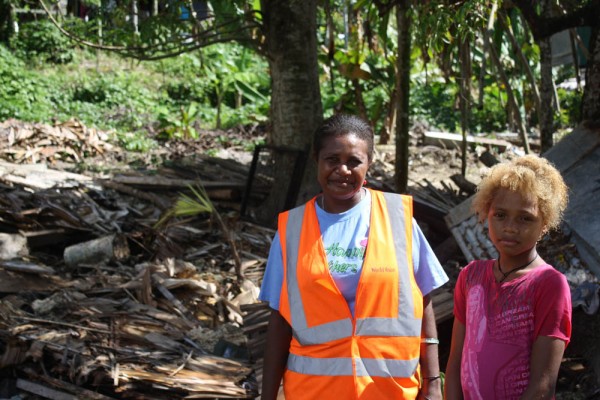 At 450km from the capital, Temotu Province is the most isolated, and doesn’t usually get a lot of external assistance. Perhaps, and paradoxically, this is due to its status as one of the poorer provinces — it’s not a big contributor to the national economy. (And, until the tsunami struck, our agency was one of the few NGOs there.) I guess people have had to be self-reliant, resilient.

The adults as well as the kids. John Michael told me he had plans to develop tourist bungalows before the tsunami struck, and showed me a big pit in the ground he started digging for a swimming pool. Sand had washed into it, made it shallower.

“The tsunami affected that too,” he told me, “but I’m still going to build it.”

Back at Ashley’s village, my colleague points out the posts already in place for the new house he’s building. From where I stand looking at it, I can feel my skin starting to burn in spite of my sunscreen. But for the displaced people living in tarpaulin shelters, I imagine the sun is a welcome change from the heavy rains which came after the tsunami.

Then, the distribution over, we leave.

At the guesthouse, I take my vest off, wash the sweat and sunscreen-grease from my skin. As I fall into bed, I’m thinking about the reports I’ll have to write up tomorrow. I’m so tired I doubt I’ll dream, but if I do it’ll be about those…and the expenditure update that’s due…and the next grant application that needs to be written…and whatever other pressing tasks are most top of mind.

Those — and the debris-strewn ground where my colleague’s kitchen used to be.