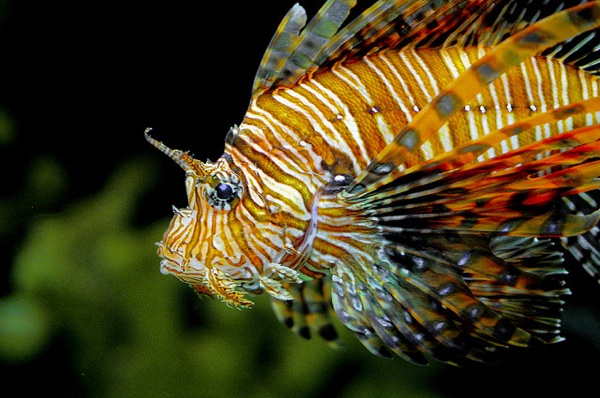 A lionfish: both beautiful and dangerous. Photo: tibchris

“And what about the lionfish?”

That’s what the person on the other end of the line asked after the teacher passed her cell phone to me.

I was about to take 20 of her students snorkeling a mile or so offshore in La Parguera, Puerto Rico and her husband was calling to ask if I’d heard about the invasion of lionfish plaguing the area.

The caller–the teacher’s husband–related that he’d heard some lionfish had escaped from an aquarium in Florida. They’d recently been spotted in the Caribbean, and allegedly in the area where we’d be snorkeling.

As the group put on their swimsuits and slathered high SPF sunscreen on each other’s backs, I ran up to the shop where our local outfitters were based. “Carlos*,” I said, hugging the divemaster I’d known for five years. “Y que con el pez leon?”

Carlos might as well have been born in the water. He’s got a shark tattooed on his shoulder. He leads snorkel and dive trips all day, every day, but his free time is still spent on his boat. For a long time, he even lived in a house perched on stilts–in the water.

On the water, at least, I trusted him with my life.

“Nada,” he said, asking me about my husband, my daughter, what I’ve been up to since I saw him last July.

After the small talk, I pressed him again, just to be sure. “En serio, have you guys seen lionfish out there?” “Out at La Pared, yes,” he answered, referring to The Wall, a popular deep water dive spot a few miles offshore. “But not where we go. Todo bien.”

*
Sometimes, if the kids aren’t strong swimmers, I’ll stay on the boat. Though the outfitters are attentive, teenagers stray; they get tired easily and overestimate their strength. When this happens, I can see them, jump in the water, and swim them back on track. Or haul them in.

But maybe I stayed on the boat this time because of the lionfish?

“Jim, I’ve got a question for you.” The captain, an American guy I hadn’t worked with before, lowered the Jimmy Buffett. “Shoot.”

“All kinds of little lies are told here. Without them, the travel industry here would collapse.”

“So is the lionfish out here?” “Yeah,” he said, almost without feeling. “It’s here.” He went back to the cabin. In a minute, Buffett’s washed out voice filled the quiet.

*
I saw Carlos dive down deep and surface again, a massive sea star in his hand. This is why he’s great with kids; he shows them a new world, gets them excited about it. He helps them confront their fears and he tells them “I’m proud of you” when they swim through that fear and pop up on the other side. Though neither of us will ever see these kids again, I know that their time with him changes them. They’re more self-confident. More brave. More willing to try new things.

If he told me about the lionfish, he knew I’d tell them the truth. And if I told them that truth, it would change everything. They’d sit on the boat, minds swimming with images of schools of lionfish.

And so he lied. 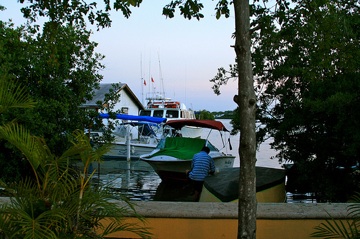 He lied, too, because this–showing people the sea–is his living. In a very real way, it’s the sustenance of the entire town. Described in guide books as a “quaint fishing village,” if you visit more than once or stay a lot longer, you know things are more complicated than that. All kinds of little lies are told here. Without them, the travel industry here would collapse.

As it would elsewhere.
*
The danger of the lionfish is real, but the National Geographic Society notes that a lionfish’s sting is “rarely fatal.” Excruciatingly painful, yes. But rarely fatal. Rarely. Hardly a comfort to people already frightened about the mysterious sea.

So we lie, Carlos and I.

__
*all names have been changed.

Far more dangerous than the threat of lionfish to snorkelers and divers is the threat these invasives pose outside their home environments. To learn more, visit REEF.org.

Tagged
Activism Narrative Puerto Rico
What did you think of this story?
Meh
Good
Awesome

Watch the Perseid meteor shower light up the sky this August
Scientists to dive into an unexplored ‘blue hole’ at the bottom of the ocean
This map shows how weak US passports are right now
The most underrated coastal towns in Europe to go to before they become touristy
Animals ‘reclaimed’ cities during the pandemic. What happens to them now?

The 15 funniest Puerto Rican expressions (and how to use them)

How to help Puerto Rico: A resource page

Puerto Rico will reopen to international tourists on July 15