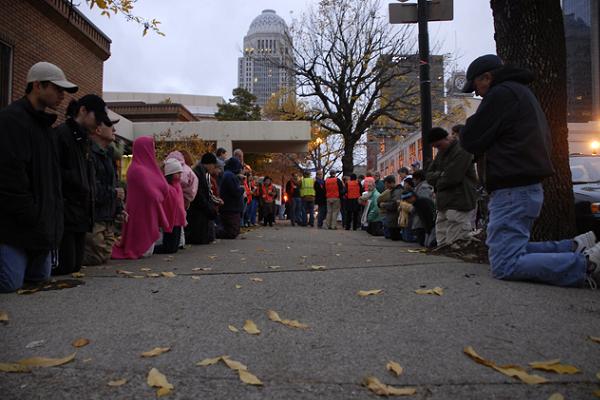 MatadorU student and contributor Linda Golden explains how the memory of a woman in Togo compels her to wake up early each Saturday.

Three couples huddle under the Louisville clinic’s awning, waiting for the doors to open. Across the property line, several protesters implore the clients to change their minds. “We love you.” “This is murder.” “There’s a heartbeat.” “Come with us, get a free ultrasound, look at your baby.”

Four escorts block the protesters, trying to shield the clients from camera phones and harassment. “Leave them alone.” “No one wants to listen to you.”

More protesters line the sidewalk, reciting the rosary. I wait across from the entrance, an orange-vested clinic escort in a wall of bowed heads. Praying men stand guard on either side of me, one holding a five-foot crucifix. I watch for clients.

At 7:20 two years ago, I would have just finished my morning run on Togo’s national highway. I was working on my English and health clubs, spending mornings at the local hospital and organizing a girls soccer tournament for International Women’s Day. For this last event, I had a committee of three women and three female students helping me.

This is how I met Zenabou.

In committee meetings, Zenabou spoke up, unhesitant about disagreeing with the older women. She regularly attended my clubs, including my Saturday morning running club. She showed the most promise on the soccer field. After we lost our first and only away game, she led the singing as we had consolation sodas with our victors. I hoped she would pass her middle school finishing exams and leave the village for high school, an accomplishment for any Togolese girl. For now, I was happy to have at least one strong player on the team. 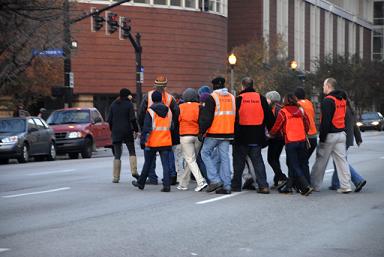 It’s 7:35 and the clinic has finally opened. A group crosses the street, coming towards me. It’s a knot of orange vests, escorts and protesters posing as escorts surround the client, who blindly steers the group as she dodges unsolicited salvation through pamphlets thrust at her. I try to make eye contact, waving and smiling.

She heads left, unaware that I will move at the last moment to let her by, then do my best to shield her until she crosses the clinic’s property line. Flanked by praying protesters, my body creates too narrow a tunnel to provide much protection. This usually smooth operation devolves into a chaotic dance – the client goes one way, the escorts signal another, the protesters push, I step aside. The client gets in, but not without a lot of sidestepping and yelling.

A praying man who’s been inching into my space angrily tells my fellow escort to stop pushing him. A scuffle ensues, the praying man falls – a little too easily – and two older protesters stare down a female escort, trying to intimidate her with their height and masculinity. Intimidation is the game here, and I’m losing.

I fight with my face, and after the next client-escort-protester group has to force its way onto the sidewalk, I grab a replacement. There is nowhere to go to hide my tears of frustration, so I walk to the corner and stare up at the bare tree branches and gray sky, willing the tears behind my eyes.

“There are many reasons I wake up at 5:30 each week. But at least one of them is the memory of a laughing sixteen-year-old girl with her friends, kicking a soccer ball at dusk on a Togolese savannah.”

Tears in Togo are for children and the desperate, so I was happy to have a room to retreat to when my counterpart gave me the news. We were at an in-service training, and he approached me before breakfast.

“They brought Zenabou to the hospital last night, and she died.”

The news sent me back to my room, sobbing. When he told me later she’d swallowed pills to abort, I had to return to my room. Malaria, I could handle. Unknown causes. Meningitis. But self-induced abortion?

I should have known better.

Too late, I returned to my village and refocused my efforts on reproductive health education. I spoke to Zenabou’s father, who denied what I’d been told, probably because the imam had refused to say prayers for the man’s daughter. I spoke to a village elder, who said it was up to me to address the students. Others told me, “C’est la vie.”

Back on the corner, I take deep breaths and collect myself, then return to the sidewalk. The Hail Marys are winding down and most of the clients are inside the clinic. It’s 8:30, and I’m shaken, but I’ll be back next Saturday. And the following Saturday. There are many reasons I wake up at 5:30 each week. But at least one of them is the memory of a laughing sixteen-year-old girl with her friends, kicking a soccer ball at dusk on a Togolese savannah.

How has travel changed the way you engage in your community at home? Send your stories to julie[at]matadornetwork[dot]com.

Tagged
Narrative Togo
What did you think of this story?
Meh
Good
Awesome

15 creamy, fruity, and indulgent ice cream styles from around the world
The oldest restaurants in the world, mapped
By rejecting international students, will Trump ruin US universities?
Barbados could soon allow remote workers to stay and work on the island for one year
South Africa’s new hotel is a luxury train permanently parked on a bridge