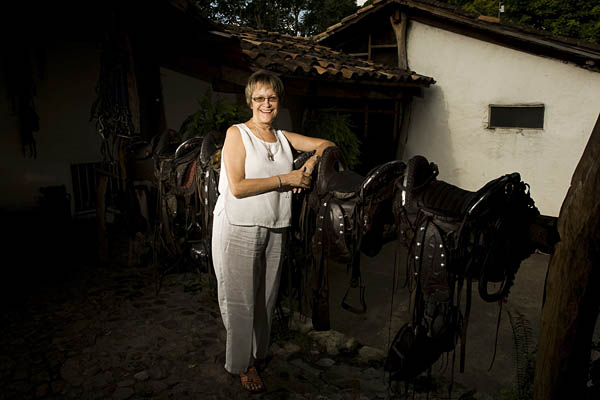 Though born and raised in Honduras, Flavia Cueva left the country to study in the United States and ended up staying longer than expected. When she returned to restore her family’s property in Copan Ruinas 30 years later, Flavia changed the face of her community and the way her neighbors viewed the importance of sustainable tourism.

It all started with Dr. Adan Cueva, Flavia’s father, who was born in Copan Ruinas in Western Honduras and was part of one of the founding families of the town. Adan was a pioneer in helping to restore and protect the Mayan ruins in Honduras, and he introduced American archaeologists to the value of the famous relics found in Copan.

Though Adan and his family lived in the capital city of Tegucigalpa, he found refuge in San Lucas, a small homestead located on 300 acres of tropical rainforest in Copan Ruinas that had been in the family for nearly 100 years. A self-proclaimed “spoiled city girl,” Flavia dreaded vacationing at San Lucas while growing up. It took two days to get from Tegucigalpa to Copan, there was no electricity on site and they had to ride mules from the heart of Copan to San Lucas.

As a young adult, Flavia left Honduras to study in the United States. She ended up marrying, raising a family, working a handful of careers and getting a master’s degree before returning to Honduras 30 years later. It was then she began to realize why San Lucas was so important to her father. In 2000, she moved to Copan Ruinas and began converting her family’s property into an eco-lodge.

She had her work cut out for her. 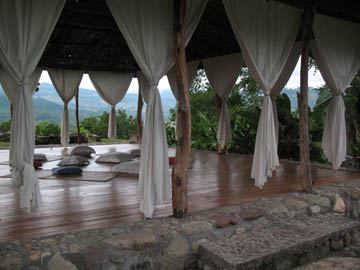 The area had been slashed and burned for agriculture. Deforestation and erosion threatened to ruin the land marking the sacred ground of the ancient Maya. Flavia planted 4,600 native trees, which provided a safe habitat for local birds and wildlife, and began to educate local farmers about the importance of proper planting in order to preserve the land.

“I truly believe that it is a privilege to take care of the land and its people in a sacred space,” she says. “It is really not ours. It is only our duty to take care of it and share it with people who visit us.”

For her work in sustainable tourism, the Chamber of Commerce and Tourism Board of Honduras awarded Flavia with the Premio Copan this year, which she describes as being like “the Oscars of tourism.” The award is given annually to one person and one institution. San Lucas was nominated for the institutional award a few years ago, but Flavia herself received the award in the personal category this year for returning to Honduras and helping the people of Copan to create a desirable and sustainable tourist destination.

The Chamber of Commerce also recently asked her to participate in the First Central American Forum on Social Responsibility, Sustainability and Climate Change. “I love the topic, of course,” Flavia says, “and I feel very honored.”

Sitting with Flavia in the restaurant area of her eco-lodge, Hacienda San Lucas, I can see the effects of her sustainability efforts. There are no electric lights (except for the one in the bathroom, but this is run on solar power); instead, every surface is covered with candles. The five-course meal that we’ve just eaten—including an flavorful cream of baby corn with chipilin soup and a main dish consisting of cream chicken with loroco—was cooked fresh on the spot; Flavia bought all of the ingredients locally and there were no additives.

In fact, she requires people to make reservations to dine at Hacienda San Lucas because she pops into town to buy exactly what she needs every morning. When a young couple shows up with no advance warning, Flavia has to work up her “fast food fare” of steamed fresh corn tamales wrapped in banana leaves served with pickled green papaya relish in place of the multi-course meal.

Just beyond the boundaries of San Lucas lies La Pintada, a village of Chortí Indians, direct descendents of the Mayans. “When I came, it was just a little forgotten village,” Flavia says. “I met with the elders and explained how it was going to change. I wanted them to be a part of it.”

“I truly believe that it is a privilege to take care of the land and its people in a sacred space. It is really not ours. It is only our duty to take care of it and share it with people who visit us.”

Today, 50 percent of the employees at Hacienda San Lucas are from La Pintada. “I hire a lot of indigenous women and now they’re empowered. Now they have jobs they’re proud of,” she says. “Their children are graduating from high school for the first time, and they have learned to work in tourism and to appreciate the value of having visitors leave pleased.”

In less than ten years, Flavia has transformed the face of San Lucas and Copan through desire and drive in a way few others could have. “There has been a renaissance in preserving the authentic,” she says of her community. “I think I helped to awake Copan to what people really enjoyed. It gave them an appreciation of their recent past while setting high standards of quality and service for the future.”

And as for Hacienda San Lucas: “It’s grown from two to eight rooms, thanks to amazing guests,” she says. “San Lucas is self sustainable, and although we will never be rich, I consider it very profitable because we have changed the lives of people. To me, it’s a miracle.”

If you find Flavia’s story inspiring, you may want to read about 50 Visionaries Changing Your World then make a commitment to change the world yourself.