I arrived in the guesthouse early afternoon and right away the owner tried to sell me a night tour of the old city of Ayutthaya. “And here you stop and watch elephant show,” she said. “I’d rather not,” I replied. “No, is nice, baby elephants doing tricks,” she continued, not understanding why I seemed uncomfortable with the idea. I declined again. But she never understood why I wouldn’t want to go. 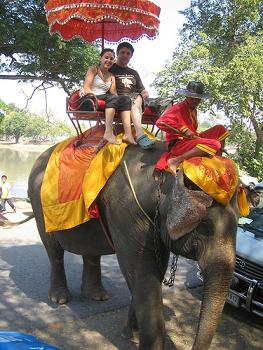 “But we are in Thailand; of course we are planning to ride an elephant. It’s what you do here,” she said. It was a few weeks later and I was talking to a girl in the hostel’s common room in Chiang Mai. I had just been telling her about my experience working at a wildlife centre south of Bangkok. I told her about Pai Lin, the elephant I had fallen in love with, and my hope to deter people from supporting elephant tourism.

Pai Lin’s story is similar to that of many domesticated elephants in Thailand, used for trekking and begging on the streets. This 60 year old elephant used to carry up to six people on her back. Seats made of a heavy wood are placed directly on their spine, thanks to which Pai Lin had a deformed back. She arrived at the centre a few years ago, malnourished, ill, and having spent many years on the streets. She’s a gentle elephant who enjoys splashing around in the water and eating pineapples or banana trees, but more than anything, enjoys the peaceful, quiet life.

If you see an elephant in Thailand and it looks okay, don’t be fooled. Domesticated elephants go through abusive training called phajan when they are young; the training makes them docile enough to be close to people and it’s called “breaking their spirit.” The elephants are often malnourished and don’t get enough water or shade. Elephants begging on the streets are often drugged to keep them going for long hours.

Lately, I’ve been reading a lot about responsible travel, but without education or knowledge, someone might just not know any better. A lot of people I met in Thailand often felt uncomfortable after riding the elephants or while watching them do tricks to entertain tourists. 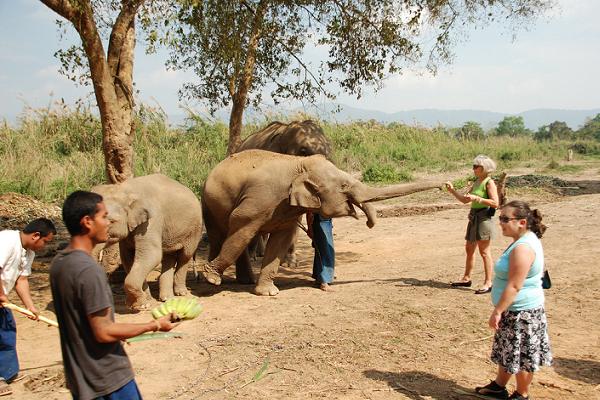 Elephant Nature Park: Volunteer for a day and see elephants being elephants. You get to feed and bathe the amazing creatures and witness them in a natural environment. Located just outside Chiang Mai. A great alternative to trekking.

Boon Lott’s Elephant Sanctuary: The sanctuary was started by a woman from London after becoming involved in the story of a baby elephant called Boon Lott. Her dedication to the baby and to the other elephants led her to open the sanctuary that now seven elephants.

Tagged
Volunteer
What did you think of this story?
Meh
Good
Awesome