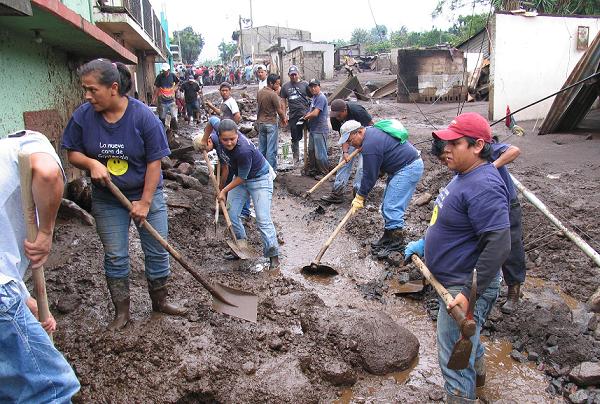 By the time you read these words, the death toll in Guatemala will have risen.

THE ERUPTION OF Volcano Pacaya and the arrival of Tropical Storm Agatha have decimated Guatemala. To date, 142 people are confirmed dead, more missing, 30,000 homeless and 111,000 affected. [Editor’s Note: Since this story was filed, a sink hole attributed to the tropical storm opened in Guatemala City, swallowing a three story building. Reports indicate one person was killed.]

The GOD’S CHILD Project is one of the largest service providers in Guatemala and its base of operations in Antigua is perfectly positioned to provide assistance to those most affected. It is working with mayors and community leaders to organize relief efforts.

Ciudad Vieja is one of the cities most affected by the disaster, with mudslides destroying homes and taking lives. It’s not the first time this has happened here; Ciudad Vieja means “old city”, and it was once the capital of Guatemala… before devastating mudslides forced most inhabitants to abandon the city.

Since the disaster, The GOD’S CHILD Project has been providing food, clothing, and shelter to over 1,000 victims daily. Victor Garrido, a GOD’S CHILD Project staff member says, “We are literally digging people out of the ground with our shovels.” Volunteers, who came to Guatemala thinking they would be volunteering in a school or taking care of malnourished infants, are finding themselves on the front lines of disaster relief. 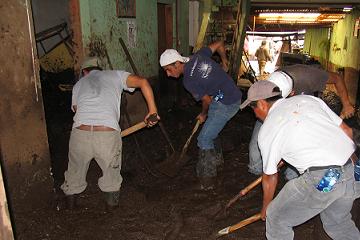 Long-term volunteer Corinne Castro updated her Facebook status after working a twelve-hour day in Ciudad Vieja: “The city is covered in 6ft of mud. Houses are destroyed, thousands are left without food, and while I was there several bodies  were dug out, one including a mother still clutching her baby. The  organization with which I am working, The GOD’S CHILD PROJECT, is desperate  for supplies and donations. PLEASE PLEASE help if you can!”

Disasters do not strike when it fits into our schedules; they strike and then our schedules and priorities change. With Chile, Haiti, and other disasters that have struck this year, Tropical Storm Agatha and Volcano Pacaya could not have happened at a worse time. Media coverage is limited, and people cannot help but feel they have seen this episode before.

But people on the ground face waning resources; they need help and they need it now. At the heart of the disaster, they know just how far a little more help can go, and they have seen both the faces of the rescued and the faces of those who were not helped soon enough.

For the past two years I have worked for The GOD’S CHILD Project in Guatemala and I have seen first-hand our response to need: to give everything we can of whatever we have. Because of recent assistance that was provided to Haiti, our project’s resources are wearing thin.

Executive Director and founder Patrick Atkinson, in a letter to supporters said, “We are not only facing a horrible disaster, but a lack of resources due to the material and financial assistance we provided to Haiti. We are rationing our supplies for the most needy and most affected victims, and sending out a call to action. We need your help and we need it now.”

The GOD’S CHILD Project is a widely known international development organization on the front lines of rescue efforts in the most devastated areas of Guatemala. 92 cents of every dollar make it directly to victims. You won’t find another organization here with such thin administration costs.

If you’d like to make a donation, please visit The GOD’S CHILD Project.

Tagged
Travel Guatemala
What did you think of this story?
Meh
Good
Awesome